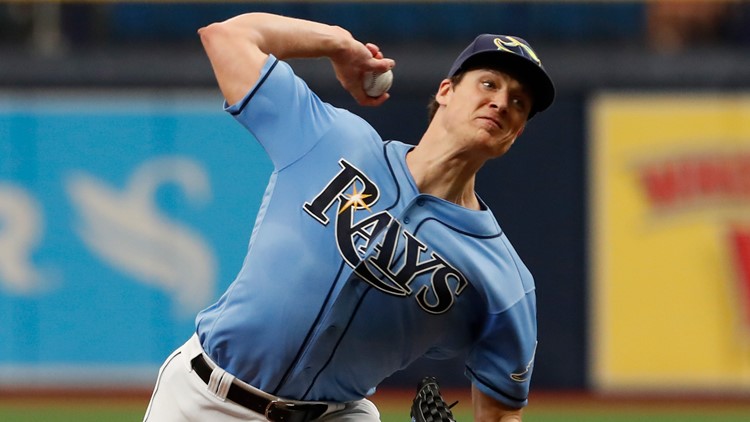 Photo by: AP Photo/Scott Audette
Tampa Bay Rays pitcher Tyler Glasnow works from the mound against the Toronto Blue Jays during the first inning of a baseball game on Sunday Sept. 8, 2019, in St. Petersburg, Fla.

ST. PETERSBURG, Fla. — Tyler Glasnow figures to be a factor as the Tampa Bay Rays make their playoff push.

Glasnow struck out five over two innings in his return from a four-month layoff caused by a strained right forearm, and the Rays beat Toronto 8-3 Sunday to complete a four-game sweep that left the Blue Jays as the fifth major league team on pace to lose 100 games.

"Honestly I feel very similar to how I felt before I got hurt," Glasnow said. "I think I'll stretch out like a starter and then just build back up to the playoffs."

Glasnow struck out Bo Bichette, Teoscar Hernández and Rowdy Tellez in order on 12 pitches in the first, twice reaching 100 mph. He walked Vladimir Guerrero leading off the second and gave up a two-run homer to Randal Grichuk, a 451-foot drive to center that put Toronto ahead 2-1.

"It's really a step in the right direction," Rays manager Kevin Cash said.

A 26-year-old right-hander, Glasnow threw 25 of 41 pitches for strikes, allowing the one hit and two walks. He had not pitched in the major leagues since May 10 and was 6-1 in eight starts with an AL-leading 1.86 ERA when he went on the injured list. Glasnow made a pair of minor league injury rehabilitation assignments for Triple-A Durham.

"Being able to sit back and watch, it was stressful for me not being there and just watching them do so well," Glasnow said. "Now that I'm back and being able to contribute, it's a little better feeling."

Austin Meadows and Avisail García homered for the Rays, who remained one game ahead of Oakland for the top AL wild card. Tampa Bay, which has won 10 of 11, outscored Toronto 24-10 in the series.

Despite being in contention for a postseason berth, the Rays drew just 14,071 to Tropicana Field for the finale of their next-to-last homestand.

Daniel Robertson put the Rays ahead to stay with a two-run triple in the second, and Tampa Bay opened a 6-2 lead in the fifth when Garcia and Travis d'Arnaud hit RBI doubles and around Ji-Man Choi's sacrifice fly. García added a two-run homer in the seventh against Sam Gaviglio, a 456-foot drive.

Meadows homered in the fifth, his 28th this season and seventh off Toronto.

RELATED: This video of the Rays' Kevin Kiermaier and his baby will make your day

Blue Jays: RHP T.J. Zeuch gets his first major league start Tuesday night against the Boston Red Sox in Toronto. The 24-year-old right-hander made his big league debut with he allowed two runs over four innings of relief in a 7-2 loss at Atlanta.

Rays: LHP Ryan Yarbrough (11-3) is to start Tuesday night at Texas in the opener of an eight-game trip.