The Nationals visited the White House, and several teammates were missing

Seven members of the 25-man World Series roster did not visit the White House Monday, including Anthony Rendon and Sean Doolittle. 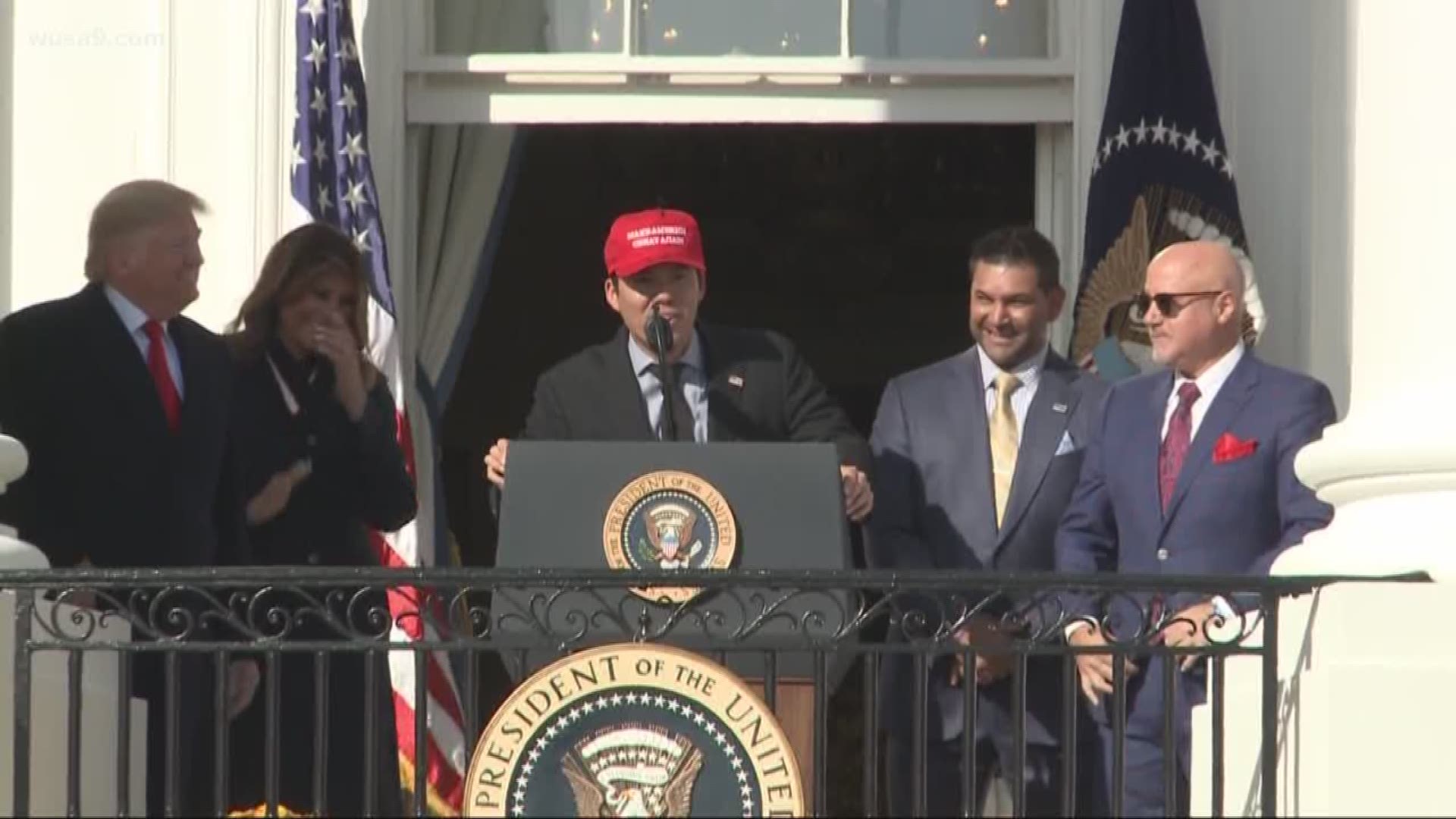 WASHINGTON — The Washington Nationals celebrated winning the World Series with a trip to the White House, and while several players felt the love, others didn't attend.

Reasons were not given for the absence of most of the players, though Doolittle cited "divisive rhetoric" from the administration in his explanation to the Washington Post; Guerra said he was preparing for his wedding on Saturday.

President Trump shared a moment with Kurt Suzuki, when he highlighted the catcher's game-ending, three-run home run against the Mets back in September. Suzuki approached the podium, put on a 'Make America Great Again' hat, and President Trump gave him a hug.

"What a job he did, I didn't know that was going to happen," President Trump said.

Face of the franchise, Ryan Zimmerman, called the visit to the White House an "honor," thanked Trump for "continuing to make America the greatest country to live in the world," and presented the president with a Nationals jersey.

The Washington Post previously reported that Doolittle wasn't going to attend the celebration at the White House. Though the Nats closer has never criticized Trump by name publicly, he and his wife Eireann Dolan are politically active, and Doolittle was one of several athletes who denounced Trump's 2016 comments about groping women without consent.

Doolittle supports a number of organizations aiding veterans, as well as supporting the LGBTQ community and refugees. In 2015, when the Oakland Athletics' Pride Night was criticized by some fans, Doolittle and Dolan bought 850 game tickets and donated them to local LGBTQ groups. Later that November, the couple also hosted a Thanksgiving dinner in Chicago for 17 Syrian refugee families.

In a statement to the Post, Doolittle said, “I feel like there are .... a lot of things that have been said by the president, a lot of things that have been done by the administration that I can’t, no matter what, I can’t reconcile with what I believe in, what I feel very strongly about. . . . There’s a lot of things, policies that I disagree with, but at the end of the day it has more to do with the divisive rhetoric and the enabling of conspiracy theories and widening the divide in this country.”

During Trump's administration, a few winning teams have been reluctant to go to the traditional White House championship visit.

The teams include the Golden State Warriors, who were disinvited by Trump after several players said they would not attend and the Philadelphia Eagles who had their visit canceled by the White House because only 10 players agreed to visit.

The Capitals visited the White House in 2018 after their first Stanley Cup win over the Vegas Golden Knights. Two members of their team, goaltender Braden Holtby and right-winger Brett Connolly did not go on the visit. Holtby said that it was a personal thing for him and he wanted to stick to his values. Team member Devante Smith-Pelly also did not make the visit because he was playing for Washington's AHL affiliate.