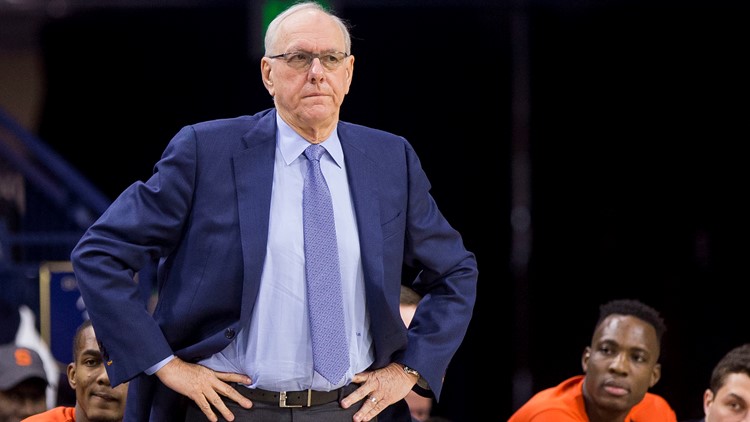 Boeheim, 74, struck Jorge Jiminez, 51, of Syracuse, police say. Jiminez got out of a car after a previous crash on I-690 near Thompson Road when he was struck, CNY Central reports, citing the police.

Onondaga County District Attorney William Fitzpatrick told Syracuse.com that Boeheim’s blood-alcohol registered a .00. No tickets or citations have been issued to Boeheim at this time.

Syracuse.com reported a police investigation found Jimenez was a passenger in a car that lost control on the highway, striking a guard rail. Three other people were in the car with Jimenez during the initial crash, also got out and walked on I-690 near the vehicle, police said.

Boeheim noticed the car and tried avoiding it, according to police. The car was in the middle of the road, CNY Central reported. Boeheim's car then hit Jimenez, who police say was standing on the side of the road.

Both Boeheim and the driver of the other car remained at the scene and are cooperating with the investigation, according to Syracuse.com.

Syracuse.com reported that police performed field sobriety and alco-sensor tests for both drivers, which came up negative for any signs of impairment.

Syracuse Director of Athletics John Wildhack issued the following statement on the crash:

"We are saddened by the death of a member of our Central New York community. On behalf of Chancellor Kent Syverud and the entire Syracuse University community, we extend our deepest condolences to all impacted by this tragic accident. Coach Boeheim is in contact with local authorities and cooperating in fully. Out of respect for those grieving, there will be no further comment at this time.