The Cleveland Browns opened the 2019 season with a 43-13 loss to the Tennessee Titans at FirstEnergy Stadium Sunday. 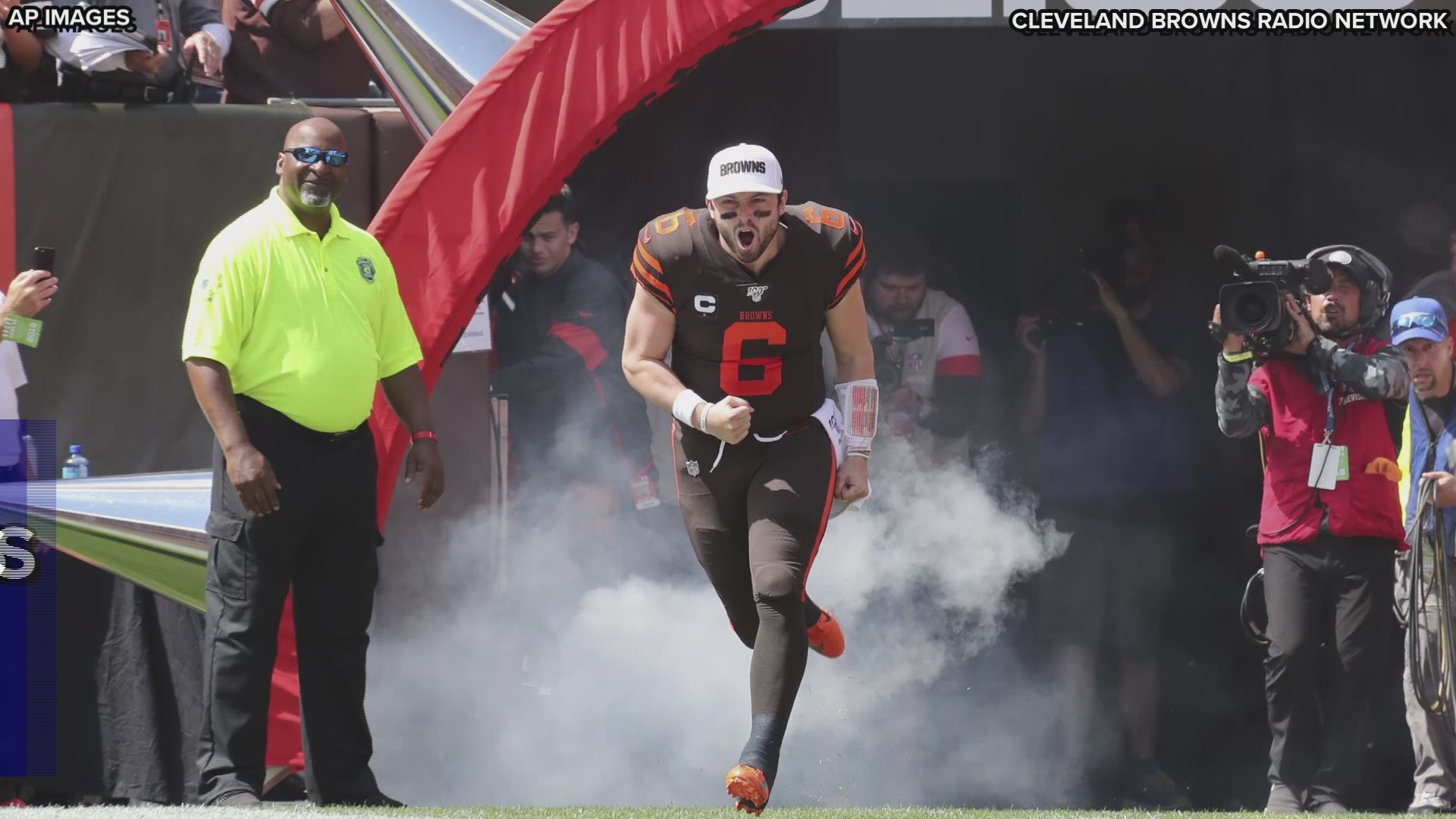 After months of offseason hype in the national media and talk from within the locker room, the Cleveland Browns played an undisciplined game and fell short of delivering on the promise, suffering a 43-13 loss to the Tennessee Titans in the 2019 regular-season opener at FirstEnergy Stadium in Cleveland Sunday.

The Browns committed 18 penalties for 182 lost yards, lost their starting and backup left tackles, Greg Robinson (ejected) and Kendall Lamm (knee injury), in the first half and had an inability to keep upright their quarterback, Baker Mayfield.

Mayfield completed 25 of his 38 attempts for 285 yards and one touchdown, but threw interceptions on three drives in a four-possession stretch during the second half, the last of which was returned by cornerback Malcolm Butler 38 yards for a touchdown with 3:02 to play in the fourth quarter.

The Browns (0-1) will have an extra day to marinate on the loss to the Titans, as they will look to even up their record in a Monday Night Football game against the New York Jets at MetLife Stadium in East Rutherford, New Jersey in Week 2.

The Titans will have their home opener next Sunday when they host the Indianapolis Colts at Nissan Stadium in Nashville.

The Tennessee Titans are leaving no doubt in their 2019 regular-season opener against the Cleveland Browns at FirstEnergy Stadium in Cleveland Sunday.

Already up by 16 points in the fourth quarter, the Titans expanded the lead with another Marcus Mariota touchdown pass to tight end Delanie Walker, which capped off a short scoring drive after the defense collected its second interception of Browns quarterback Baker Mayfield.

The second Mariota-to-Walker touchdown of the fourth quarter, and ensuing extra point, gave the Titans a 36-13 lead over the Browns with 9:03 to play in the game.

The Tennessee Titans are rolling offensively, and the Cleveland Browns find themselves on the wrong end of a 29-13 score with 12:32 to play in the fourth quarter of the 2019 regular-season opener at FirstEnergy Stadium in Cleveland Sunday.

After the Titans’ defense gave the offense a short field with an interception of Browns quarterback Baker Mayfield, Titans signal-caller Marcus Mariota threw an 11-yard touchdown pass to tight end Delanie Walker to cap off the four-play drive and give Tennessee a 16-point lead.

The Tennessee Titans picked themselves up off of the canvas in short order and got a quick response score to the Cleveland Browns’ first touchdown drive of the second half.

After watching their lead dwindle to just two points, the Titans answered with a one-play, 75-yard scoring drive that featured a short pass to the left side of the field from quarterback Marcus Mariota to running back Derrick Henry.

Following a block near the line of scrimmage that sprung him free, Henry hustled down the left sideline nearly untouched and scored his second touchdown of the game against the Browns.

With the successful point-after-touchdown, the Titans held a 22-13 lead over the Browns with 1:57 to play in the third quarter of the 2019 regular-season opener at FirstEnergy Stadium in Cleveland.

The Cleveland Browns have awaken from their offensive slumber against the Tennessee Titans in the 2019 regular-season opener at FirstEnergy Stadium in Cleveland Sunday.

After struggling to move the ball and overcome penalties for much of the second and third quarters, quarterback Baker Mayfield moved the offense 61 yards in six plays with the final one going for a three-yard touchdown to tight end David Njoku.

Following a successful point-after-touchdown conversion, the Browns cut the Titans’ lead to just two points, 15-13, with 2:10 to play in the third quarter.

The Tennessee Titans were forced to put kicker Ryan Succop on injured reserve and sign veteran free agent Cairo Santos earlier this week, but the latter proved to be a good decision, as he has paid dividends for the team in the 2019 season opener against the Cleveland Browns at FirstEnergy Stadium in Cleveland Sunday.

On the opening drive of the second half, Santos gave the Titans a 15-6 lead over the Browns with a 53-yard field goal at the 11:53 mark of the third quarter.

2:26 p.m.-Titans get a safety against Browns

The offensive struggles continued to get worse for the Cleveland Browns in the first half against the Tennessee Titans at FirstEnergy Stadium in Cleveland Sunday.

After being unable to move the ball for much of the first half, committing nine penalties for nearly 100 lost yards and having their left tackle ejected for kicking a Titans defender in the head following a two-yard run from Nick Chubb, the Browns surrendered a sack of quarterback Baker Mayfield in the end zone with 1:47 remaining in the second quarter.

The safety led to a 12-6 lead for the Titans late in the half.

Cleveland Browns left tackle Greg Robinson had a shorter than expected afternoon’s worth of work against the Tennessee Titans in the 2019 regular-season opener at FirstEnergy Stadium in Cleveland Sunday.

Following a two-yard gain from running back Nick Chubb in the second quarter, Robinson fell to the ground, and while on his back, delivered an up kick to the facemask to a Titans defender and was penalized 15 yards for unsportsmanlike conduct, but that was only the start of the punishment.

After the officials huddled near the Browns’ sideline, it was determined that Robinson’s actions warranted a disqualification and he was ejected from the game late in the second quarter.

Robinson’s infraction and subsequent ejection were just the latest example of undisciplined play by the Browns in the first half.

The Browns committed nine penalties for nearly 100 lost yards in the first half against  the Titans.

The Cleveland Browns have a penalty problem, and it cost them dearly on the Tennessee Titans’ first possession of the second quarter in the 2019 regular-season opener for both teams at FirstEnergy Stadium in Cleveland Sunday.

By committing four penalties, including 15-yard violations for unnecessary roughness (Myles Garrett) and roughing the passer (Sheldon Richardson), the Browns gave away 40 free yards, and the Titans took advantage by sustaining an 11-play, 87-yard drive in just over five minutes and finishing off the possession with a Derrick Henry one-yard touchdown run behind right guard.

Kicker Cairo Santos tacked on the extra point and made it a 10-6 Titans lead over the Browns with 9:39 remaining in the first half.

The Tennessee Titans answered the Cleveland Browns’ opening scoring drive with one of their own in today’s regular-season opener at FirstEnergy Stadium in Cleveland.

The Titans needed seven plays, and a roughing the passer penalty on safety Jermaine Whitehead, to move the ball 58 yards, but a succession of a negative run from Derrick Henry, short pass from quarterback Marcus Mariota and an incompletion brought on the special teams.

Newly signed kicker Cairo Santos converted a 37-yard field goal attempt that cut the Browns’ lead to 6-3 with 6:32 remaining in the first quarter.

The Cleveland Browns took the ball to start the 2019 regular-season opener against the Tennessee Titans, and they marched right down the field and ended the first possession of the year with a run across the goal line.

In a last-second substitution, the Browns pulled running back Nick Chubb in favor of Dontrell Hilliard, and the second-year ball-carrier from Tulane scooted across the goal line for the touchdown.

Although rookie kicker Austin Seibert missed the extra point try wide right, the Browns still held a 6-0 lead over the Titans with 10:11 remaining in the first quarter at FirstEnergy Stadium in Cleveland.

Quarterback Baker Mayfield was four of five for 64 yards on the opening drive, with Odell Beckham Jr. and Rashard Higgins each catching two passes. Beckham Jr. gained 18 yards on his first receptions as a member of the Browns and Higgins had 46 yards.

Chubb and wide receiver Jarvis Landry gained 10 each on their first carries of the season.

Of those seven inactives, only Takitaki was listed on the injury report, as the other six were healthy scratches.

Wide receiver Odell Beckham Jr. and defensive tackle Devaroe Lawrence were the other two players on the Browns’ injury report throughout the week, and both are active for today’s game.

Takitaki has been battling through a hamstring injury for the better part of the last month, dating back to the team’s joint practices with the Indianapolis Colts at Grand Park in Indianapolis in mid-August.

The Browns selected Takitaki out of Brigham Young University with the No. 80 overall pick in the 2019 NFL Draft.

Over 41 career games in four years with the BYU Cougars, Takitaki registered 241 total tackles, including 145 solo stops and 96 assists. Of those 241 total tackles, 33.5 went for lost yardage and 15.5 were sacks of opposing quarterbacks.

Finally, the day Cleveland Browns fans have waited for since the acquisition of Pro Bowl wide receiver Odell Beckham Jr. in March is here.

After months of anticipation, weeks of work during the offseason program, training camp and the preseason, and days of practice since the roster was reduced from 90 to 53 players last Saturday, the Browns will begin the 2019 regular season when they host the Tennessee Titans at FirstEnergy Stadium in Cleveland this afternoon.

The Browns will go in search of their first victory in an opener since 2004 and only the second win in such games since their return to the National Football League in 1999.

For Browns fans, it will be their first look at Beckham Jr. outside of training camp practices.

Beckham Jr. was held out of all four of the team’s preseason games and most of the 11-on-11 drills during training camp practices while working through a hip issue. However, Beckham Jr. returned to full-team drills before the final preseason game was a full participant in practice throughout the week.

Beckham Jr. has four 1,000-yard and three double-digit touchdown seasons on his resume since being selected with a first-round pick in the 2014 NFL Draft out of Louisiana State University.

“He’s as good as advertised, I’ll tell you that,” running back Nick Chubb said of Beckham Jr. “Never seen anything like it. His footwork’s so smooth. He can make huge plays and he does it so easy. One-hand catches come natural to him. I’m excited to watch, too.”