The Cleveland Browns unveiled a statue honoring Otto Graham outside of FirstEnergy Stadium on the even of the 2019 season opener. 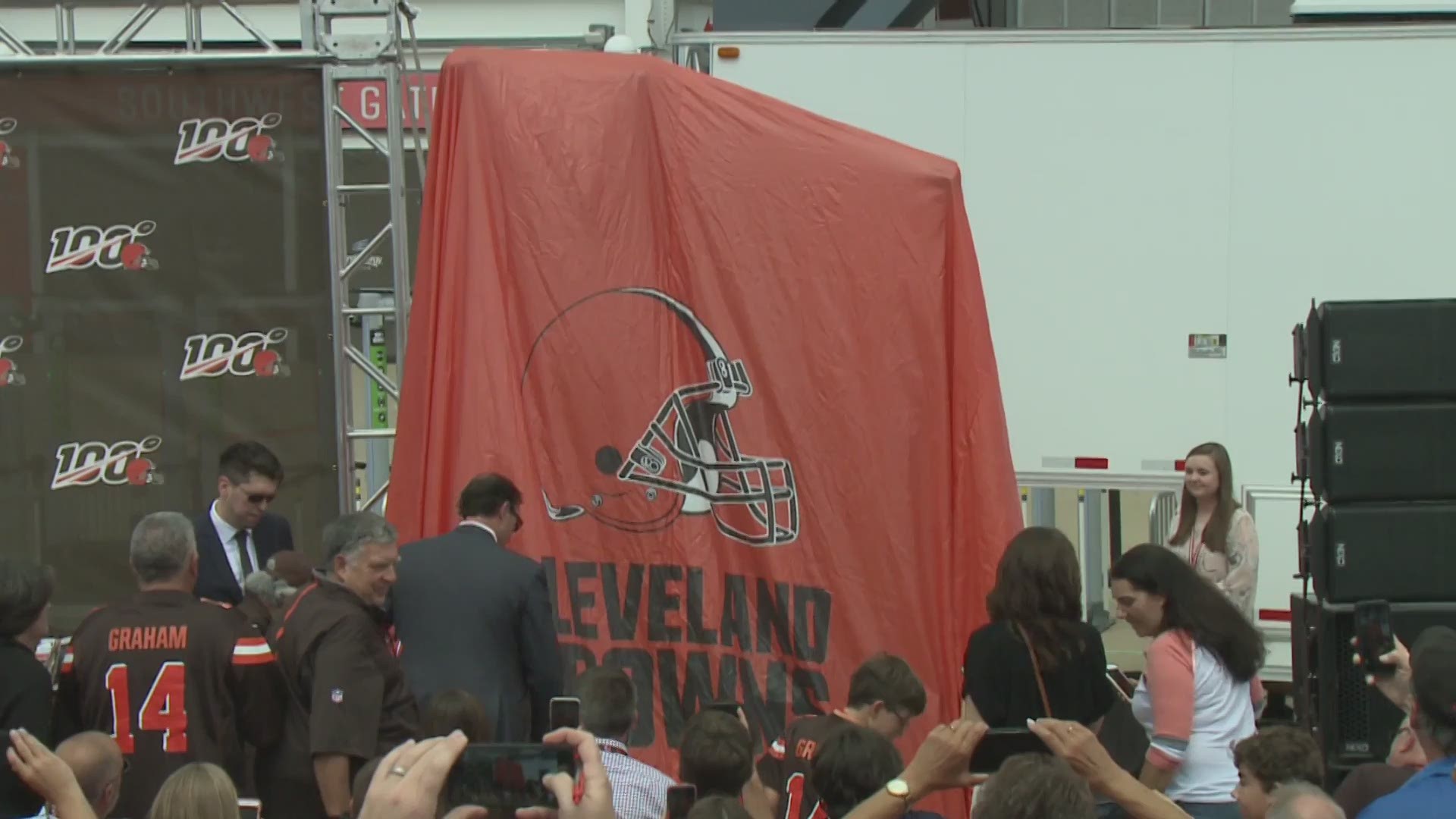 CLEVELAND — On the eve of the 2019 regular-season opener against the Tennessee Titans, the Cleveland Browns unveiled a statue honoring one of their legendary players outside of the southwest gate at FirstEnergy Stadium.

As part of their weekend-long activities honoring the alumni and newest inductees into the Browns Legends club, the Browns unveiled a statue of multi-time Pro Bowl/All-Pro quarterback Otto Graham, who led Cleveland to four All-America Football Conference titles (1946-1949) and three NFL championships (1950, 1954-1955) during his 10-year career.

“It is such an honor,” said Beverly Graham, Otto's 95-year old widow. “I know it never would have entered Otto’s mind ever that something like this would be done. He is in heaven looking down upon us today, and he is amazed.”

Ryan Van Name, Graham’s grandson, added, “I know my family appreciates it so much, and I wasn’t lying when I said these past few weeks, especially this last week, this city has taken us in like family. Sorry for getting choked up, but it really is special for all of us, my grandmother included.

“I just wish my grandfather was here to see it. I know he’s looking down right now. He’s smiling with the rest of the family that we’ve lost over the years. It really has been a great experience, and I truly want to thank the City of Cleveland.”

The 11-foot tall bronze statue with stainless steel metal support tips the scales at 1,000 pounds, and Graham’s figure is eight feet tall on top of a three-foot base. Graham’s statue took Deming Art, LLC in Lakewood six months to finish from commissioning to unveiling.

Thirty-nine members of Graham’s family attended the unveil, including his 95-year-old wife, Beverly.

“Otto’s career was legendary, and I think it’s well deserved that he has a statue here just down the street from Jim Brown,” Browns executive vice president JW Johnson said following the unveil. “We’re excited to see that, and it’s great to see the fans out here supporting it.”

In 10 trips to the postseason, Graham completed 159 of his 300 pass attempts (53.0 percent) for 2,101 yards and 14 touchdowns. Graham started 12 playoff games for the Browns and posted a 9-3 record on the way to those seven total championships.

A dual-threat quarterback in his day, Graham rushed for 882 yards and 44 touchdowns on 405 carries over 126 regular-season games. Graham added 359 yards and six touchdowns on 73 carries in 12 postseason starts for the Browns.

Graham was enshrined into the Pro Football Hall of Fame in 1965.

“My grandfather loved this city,” Van Name said. “When I said it in my speech, the first time I ever saw him cry was in ‘96 when they moved to that other city. It was shocking, especially a young adolescent, to see that. It stuck with me and still is with me to this day.

“When I was writing the speech, I tried to think of what he would say, and I hope that came across because he did love this city. He loved the fans. Whenever he’d talk about this city, he had a huge smile on his face. This has been a very special weekend for my entire family.”