Bucs look to become the first team in over 15 years to repeat as Super Bowl Champions. 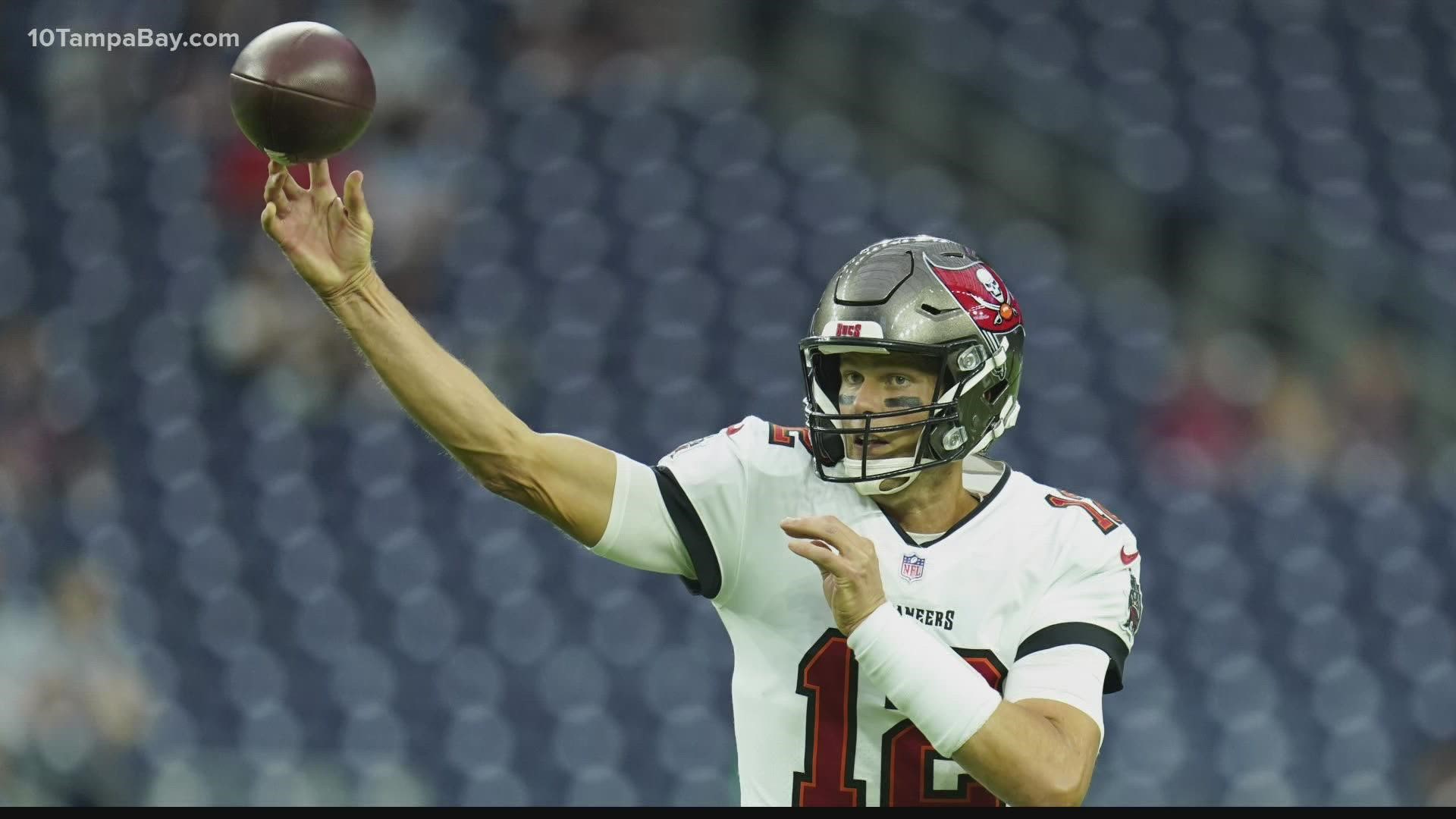 TAMPA, Fla. — Football season is back and, naturally, kickoff is where the champs play.

The Tampa Bay Buccaneers face the Dallas Cowboys at 8:20 p.m. Thursday from Raymond James Stadium. Refresh this page for updates.

Want to watch the game? You can stream the season opener on the Yahoo! Sports app and the Buccaneers' official app.

Fumbled at the goal line!

Make that ✌️ for @RobGronkowski

A connection that never gets old: pic.twitter.com/d8ncaKIZYi

8:52 p.m.: Cowboys respond with a touchdown of their own. The game is tied 7-7 with over a minute left in the first quarter.

8:43 p.m.: After starting their drive on their own six, the Bucs march down the field for a touchdown. Bucs lead Cowboys 7-0.

8:24 p.m.: It's game time! Bucs start their quest for back-to-back Super Bowl titles after receiving the ball to start the game.

7:50 p.m.: The GOAT takes some practice reps before playing in his 22nd season in the NFL.

Scroll below for a preview of the Bucs/Cowboys matchup.

“We’re miles ahead of what we were last year," Tampa Bay Buccaneers wide receiver Mike Evans said before the 2021 season opener.

Evans, who has been adamant that this is his best training camp to date, is on the verge of setting a major Bucs' record this season. He will pass Mike Alstott for most touchdowns in franchise history if he gets 10 touchdowns this season.

Evans is not the only wide receiver ready to have a big game against the Cowboys and a strong 2021 season.

Antonio Brown has caught the attention of the coaching staff and players all camp long.

"He’s shown you the seasons he is capable of having. He’s shown what he can do on a year-in, year-out basis. I’ve known him for a while," Tampa Bay Buccaneers offensive coordinator Byron Leftwich said on Aug. 17th.

RELATED: What you need to know ahead of Bucs opening day

Credit: AP
FILE - In this Sunday, Jan. 17, 2021 file photo, Tampa Bay Buccaneers wide receiver Antonio Brown warms up before the first half of an NFL divisional round playoff football game between the New Orleans Saints and the Tampa Bay Buccaneers in New Orleans. NFL wide receiver Antonio Brown has settled a civil lawsuit by former trainer Britney Taylor, who accused Brown of sexually assaulting her. Taylor filed the lawsuit in 2019, and lawyers for her and Brown released statements Wednesday, April 21, 2021 revealing the agreement. (AP Photo/Brett Duke, File)

The Bucs offense will face one of the NFL's worst defenses statistically last year. Only four teams in the league allowed more points per game than the Cowboys in 2020.

This game could feature an early-season offensive explosion with how much talent the Cowboys have on offense.

“I think whether they score or not, we feel like that’s our job. Coach doesn’t put us out there to punt. We want to go out there and score points too. They’re going to move the ball, they’re going to have some yards," Tampa Bay Buccaneers quarterback Tom Brady said.

"Our defense – we both have to do a good job in the red area and it’s always about points. You win or lose based on points. They do a good job of moving the football. If they score, then we have to score too. We’re going to try and score every time we have the ball.”

RELATED: How to stream the Bucs vs. Cowboys season opener

10 Tampa Bay will have all angles of this game covered. You can catch our weekly Bucs assessment Sundays at 11:30 a.m. on "The Blitz" with Super Bowl Champion Simeon Rice.