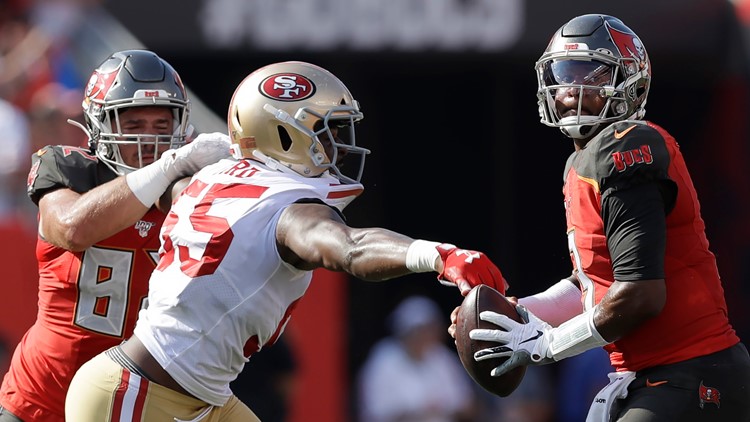 TAMPA, Fla. — The question of what the Tampa Bay Buccaneers will be doing at quarterback next year has become one of the biggest mysteries of the off-season.

It's been a debate that the team, and fans, have been having since the beginning of the 2019 season, and that's only once things got foggier. Winston set records as he led the league in passing, but some of those records included being the first quarterback to throw 30 touchdowns and interceptions in the same season -- as well as the single-season record for pick-sixes (seven).

The former No. 1 overall pick could be heading to free agency, with his contract expiring.

Head coach Bruce Arians, whose entering into his second year as Bucs' head coach, has been coy about his intentions. Tampa can re-sign the Heisman winner, release him or give him the franchise tag, which would let them keep the quarterback without committing to a long-term future.

RELATED: Will there be a clearer future for Jameis Winston?

Arians, in Indianapolis for the NFL combine, gave a little bit of a glimpse into his thought process so far today on the NFL Network, saying that the Buccaneers are ready to start figuring out who'll be under center next year.

He said that the decision pretty much rests on figuring out if there's a better option than the former Florida State star. If one of those high-profile gunslingers isn't available, bringing back Winston seems like the most likely option.

“You’ve never seen a quarterback market with like Tom Brady and Drew Brees and Philip Rivers and all these guys that are potentially going to be out there,” Arians said on NFL Network. “You don’t know what trades might happen.

"We can win with Jameis, I know that."