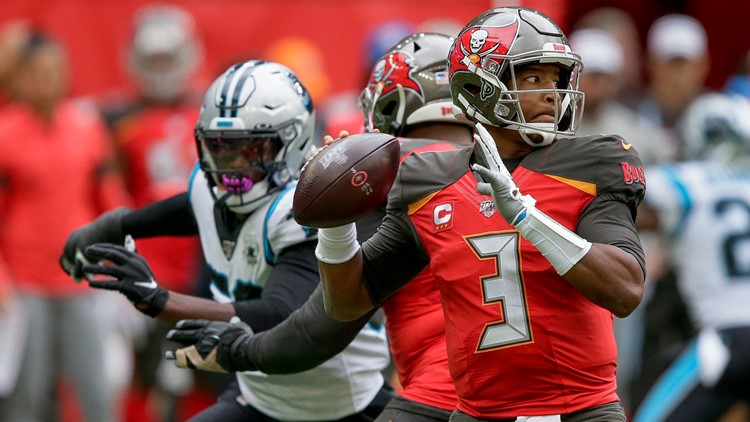 'All love and respect': Jameis Winston bids farewell to the Tampa Bay Buccaneers

TAMPA, Fla. — Five years later, Jameis Winston’s time as a Buccaneer has come to an end.

The former Tampa Bay Buccaneer quarterback has called the team home since he was selected first overall during the first round of the 2015 NFL draft.

“It's been a great 5 seasons as a Buccaneer. All love and respect, I love Tampa and I look forward to seeing y'all again in February. #SBLV #2020Vision #Dreamforever”

The end of the Winston era was anticipated after Tom Brady announced he would be taking the field with the Bucs on Friday. Brady spent 20 years with the New England Patriots, leading them to win six Super Bowls.

RELATED: Tom Brady announces he is joining the Buccaneers

But while the team was more than excited to welcome Brady, they gave their thanks to Winston and what he accomplished for the team.

“From the bottom of our hearts…Thank you, 3” referencing Winston’s jersey number.

Winston’s future with the team came under question after this past season, becoming the first player in NFL history to throw 30 touchdowns and 30 interceptions in the same season, with the Bucs finishing 7-9 overall.

But during his time with the Buccaneers, Winston did set some positive records. He became the eighth-highest quarterback to hit more than 5,000 passing yards in a season and finished as the NFL’s passing leader, the first time this title was held by a Buccaneer, according to the team.

Winston has not yet announced if he is joining another team in the NFL. In his goodbye message, he did say he’d see Tampa again—in February 2021. Hinting that he is hopeful to play in Super Bowl 55 hosted right here in the city and on the field he used to call home.