Bling Season: The Bucs show off their Super Bowl rings

The Buccaneers put a ring on it in a private ceremony. 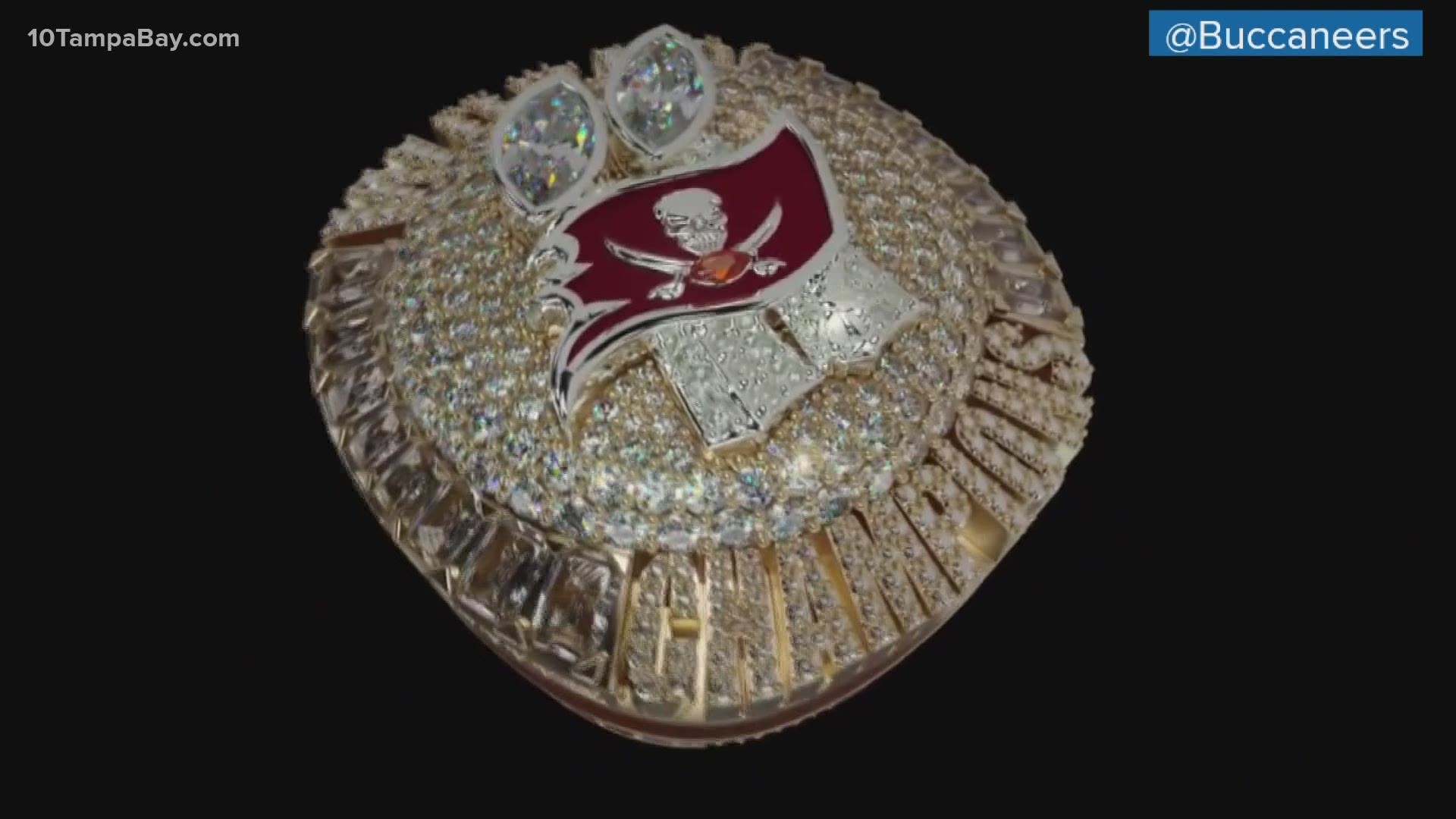 TAMPA, Fla — It's ring season for the Bucs.

The Tampa Bay Buccaneers are officially sealing the deal as the team revealed their Super Bowl LV rings.

The Buccaneers say each ring has 15 carats of white diamonds and 14-karat yellow and white gold. On top of the ring, 319 diamonds represent the 31-9 final score of the Bucs' Super Bowl LV victory.

Also on top of the ring are two Lombardi Trophies, which represent the team's two Super Bowl Championships. The team's signature flag logo sits atop the Lombardis and is carved from a red stone, the Bucs said.

The top and bottom of the rings say "World Champions" encrusted in diamonds. The two words are connected by eight diamonds on each side, which the team says represents the franchise-record eight-game winning streak to end the Bucs' season.

The left and right bands of the rings have two distinct panels — one custom to each player and the other focused on the team as a whole. The player panel has each player's name, the NFL logo and the team's motto, "One Team, One Cause." The team panel has the Bucs logo and Super Bowl LV logo, flanked by the score and 2020.

And, the Super Bowl Trophy has four diamonds on it, representing the team's four playoff wins. Inside the band has the phrase "Trust, Loyalty, Respect" inscribed.

But the signature feature of the ring is a first for any Super Bowl ring — a twist-off top. The removable top has the word "historic" etched in gold, along with the team's accomplishment as the first NFL team to win a Super Bowl at its home stadium.

Once the top is removed, a tiny replica of Raymond James Stadium is revealed. A single diamond was placed in each ring at the tunnel where Bucs players entered the stadium for Super Bowl LV.

Around the top of the stadium on each side are the four scores from Tampa Bay's postseason run — their wins against the Washington Football Team, the New Orleans Saints, the Green Bay Packers and the Kansas City Chiefs.

Many of the players are tweeting, including the GOAT himself, Tom Brady, who put a seventh ring on Thursday night.

Besides Brady, the Bucs have a handful of players who are no strangers to this achievement.

Below are the players who added to their collection, according to the Bucs.

Jason Pierre-Paul won his first ring in his second NFL season during Super Bowl XLVI in 2012. The Giants defeated the Patriots where Tom Brady was the Pats quarterback.

Pierre-Paul isn't the only player who defeated his now-quarterback in previous Super Bowl appearances.

Kenjon Barner was on the Philadelphia Eagles team that beat Brady's Patriots in Super Bowl LII for the 2017 season. Barner only played on special teams in that game, returning three kickoffs for 73 yards, according to the Bucs website. He was also part of the Patriots 2018 season when the Pats defeated the Rams, 41-33.

LeSean McCoy has a different experience in Super Bowl championship games, in that, he actually never touched the field. McCoy was inactive for the game itself but still earned a ring in Super Bowl LIV for the 2019 season.

He also never touched the field in Super Bowl LV.

Shaquille Barrett won his first Super Bowl ring with the Denver Broncos during the 2015 season. The Broncos beat the Carolina Panthers 24-10 in Super Bowl L.

And last but certainly the VIP, Tom Brady is coming up on his seventh ring after winning six championships with the New England Patriots. Brady has Super Bowls XXXVI, XXXVII, XXXIX, XLIX, LI, and LII. These are the most appearances and wins by any player at any position in NFL history.

Tom, you're about to run out of fingers.

This is the Bucs' second Super Bowl Championship in club history. Their first win dates back to 2003.

The rings were designed by Jason of Beverly Hills.

Bucs get their Super Bowl rings