The Super Bowl LV-winning Buccaneers will be the first Tampa Bay team to meet the president at 1600 Pennsylvania Avenue. 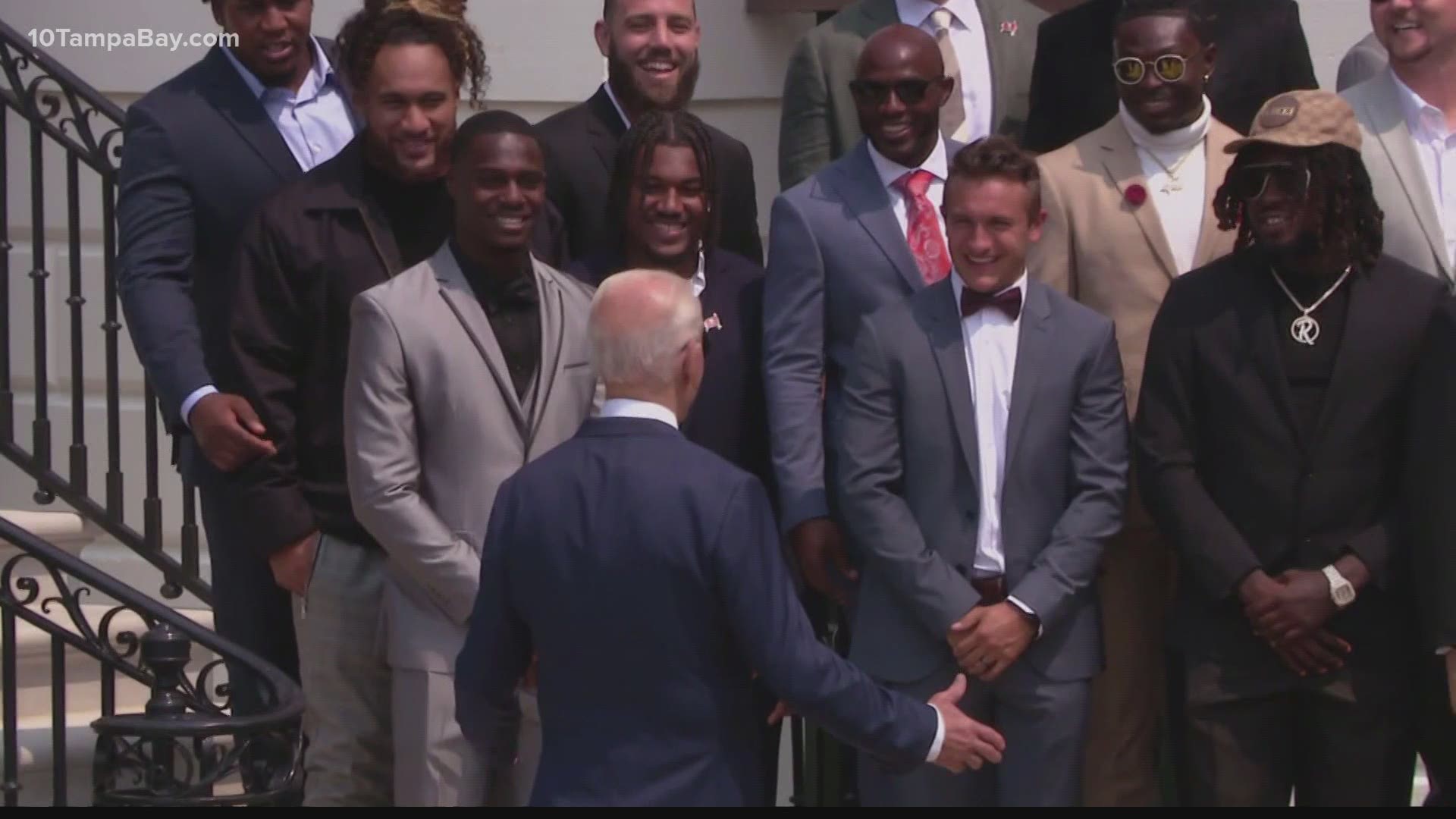 TAMPA, Fla — This week will be a whirlwind for the Bucs, who receive their Super Bowl rings on Thursday, report to fall training camp on Saturday and begin workouts on Sunday.

But first, they will visit the White House on Tuesday after receiving an invitation from President Joe Biden.

Festivities are set to begin at 11:15 a.m. in the South Lawn with a visit from the president and also second gentleman Douglas Emhoff, according to Tuesday's White House schedule.

10 Tampa Bay's Evan Closky will be in Washington, D.C., bringing you coverage as it unfolds. Follow him and 10 Tampa Bay on Instagram and Twitter as they'll provide updates and big moments throughout the day.

It's going to be a day full of excitement, and Bucs left tackle Donovan Smith is ready for the fun:

Press Secretary Jen Psaki did not confirm which players and staffers will attend, but the Tampa Bay Times reports Tom Brady will be there:

My information is that yes, Tom Brady will attend. Stay tuned. https://t.co/wpflN4anMG

Brady's plans could change, as Tuesday is also the birthday of his wife, supermodel Gisele Bündchen.

Even though Brady has won seven Super Bowls, he hasn't been a regular visitor to the 1600 Pennsylvania Avenue. He's attended the White House ceremony just three times: 2001, 2002 and 2004.

His New England Patriots didn't go to the White House in 2018, so Brady didn't have a choice that year. But in his two Super Bowl wins before that, Brady decided not to attend. The QB didn't show up for the Patriots' 2017 visit with President Donald Trump or for the 2015 visit with President Barack Obama.

Championship teams' White House visits typically follow a script. Everyone stands behind the president while he gives an address, a player hands the president a jersey with his name and presidential number on the back, and everyone smiles for the cameras.

The script could be a little different when Rob Gronkowski is there.

During the Patriots' 2015 trip, President Obama had a few jokes about the tight end.

“Gronkowski, just being Gronkowski. He’s not making rabbit ears back there, is he?” he said. "I told him to keep his shirt on. He asked me what would happen if he took it off. I said Secret Service probably wouldn’t like it. He said, what could they do to me?”

Gronk had another moment during his 2017 visit, crashing the White House press briefing.

He's not the only member of the Bucs who has made the trip before.

Bucs head coach Bruce Arians visited the White House in 2009 as the offensive coordinator of the Pittsburgh Steelers after they won Super Bowl XLIII.

Bucs coach Bruce Arians has been to the White House before -- he went as a Steelers assistant in 2009 after their Super Bowl win (in Tampa). Here's a (blurry) photo from Steelers' site. Goodwin, Leftwich, Foote also on that team. pic.twitter.com/JBWLk2nRxa