These are the can't-miss games for the Buccaneers 2021 season 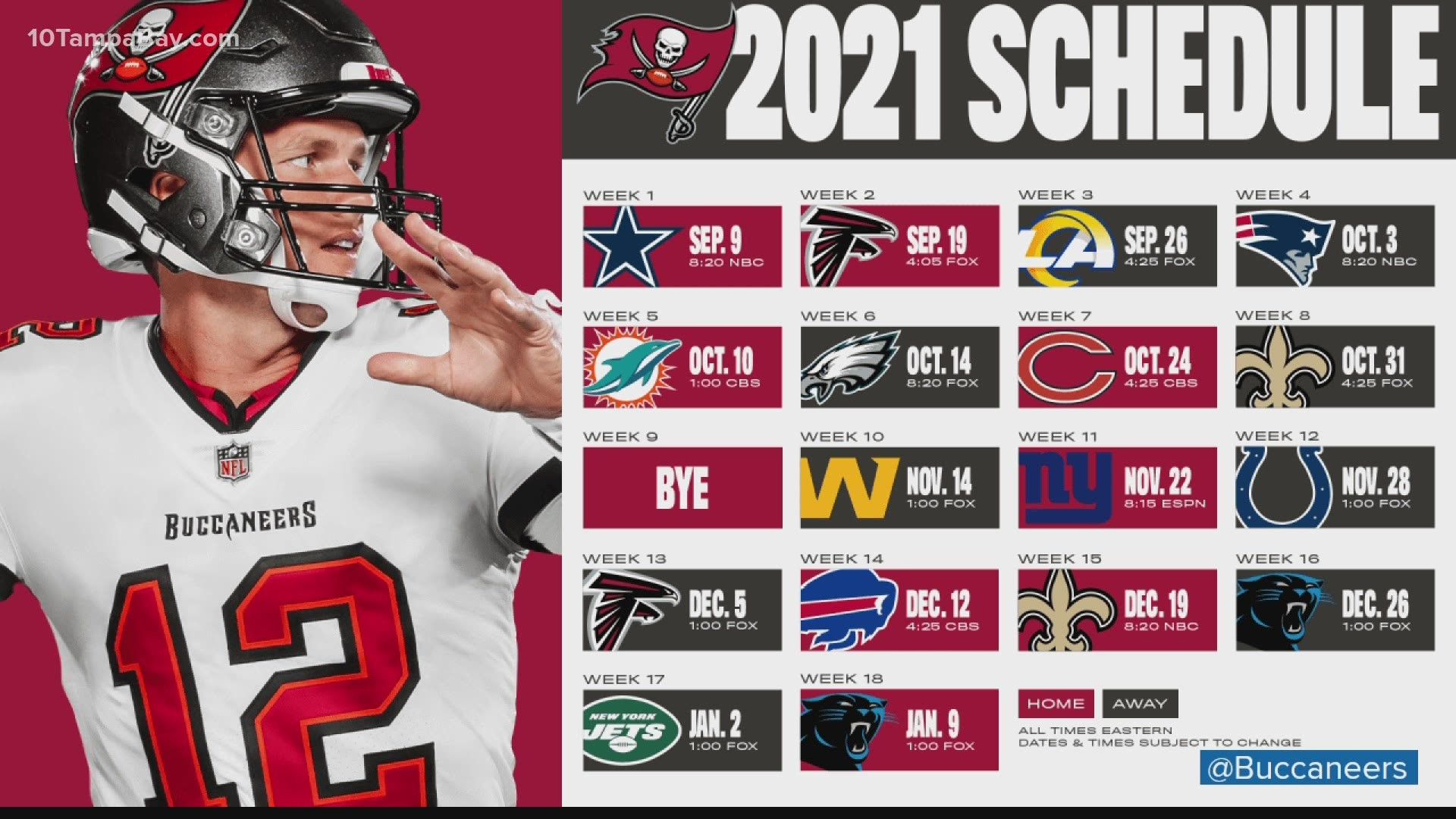 TAMPA, Fla. — The Buccaneers are “going for two” after winning their first Super Bowl title since 2003.

But, if there’s any unfinished business for the Bucs, it’s winning their first NFC South title in 14 years. Tampa Bay looks like the division favorite as the Saints, Panthers and Falcons all go through transitions. Plus, the Bucs have a real offseason with Brady to build on last season’s late success.

Here are some of the highlights of Tampa Bay’s 2021 schedule:

It’s America’s Super Bowl champions against America’s team. The Cowboys were 6-10 last season in a pitiful division. But Dak Prescott is back from a gruesome ankle injury and fresh off a $160 million contract. The Cowboys are one of four teams to which Tom Brady has never lost: He’s 5-0 against Dallas, 4-0 against Tampa Bay, 6-0 against Minnesota and 7-0 against Atlanta.

More favorable stats for the Bucs: Defending Super Bowl champions are 18-3 in NFL openers since the 2000 season. Brady is 10-1 in season-opening games, including a 5-1 record when he’s coming off a Super Bowl win.

Tom Brady won the divorce. After 20 years in New England, the Patriots let the greatest quarterback of all time walk. He led the NFL’s lovable losers to a Super Bowl LV win, and now he’s bringing the new wedding band back with him to Foxboro. Meanwhile, Bill Belichick’s team went 7-9 and missed the playoffs. They’ll have to save face with Cam Newton or first-round draft pick Mac Jones.

Logistics-wise, this might be the toughest stretch of the season for the Bucs. In the previous weeks, they will be on the road in back-to-back games, flying cross-country to visit the LA Rams, then traveling north to New England.

The Bears surprised the Bucs with a 20-19 loss last year, when Brady infamously held up four fingers and became an eternal meme, having lost count of downs on the final play of the game.

The Bears will again have a new signal caller in this matchup, either veteran Andy Dalton or first-round draft pick Justin Fields.

There are several fun subplots here. The Bucs were swept by the Saints in the regular season last year, but beat them in the playoffs, ending Drew Brees’ career.

Jameis Winston could make his first start for a rival team in Raymond James Stadium, where he played for five seasons. He’s already burned (or at least attempted to burn) the Bucs twice since putting on the black-and-gold uniform – revisiting his “Eat a W” celebration and partying it up in the visiting locker room after a regular season win in Tampa, then slinging a 56-yard touchdown on a trick play in the playoffs.

The Buccaneers’ full 2021 season schedule is below, with primetime games notated:

ROAD TO A REPEAT? | The Tampa Bay @Buccaneers' 2021 schedule has been released 👀https://t.co/KDXktYFBeL | #GoBucs pic.twitter.com/ltR0YyDdG2