“When you look at this big picture, what you see is a franchise who does not appear to value their women,” said Michelle Simpson Tuegel, a Dallas attorney. 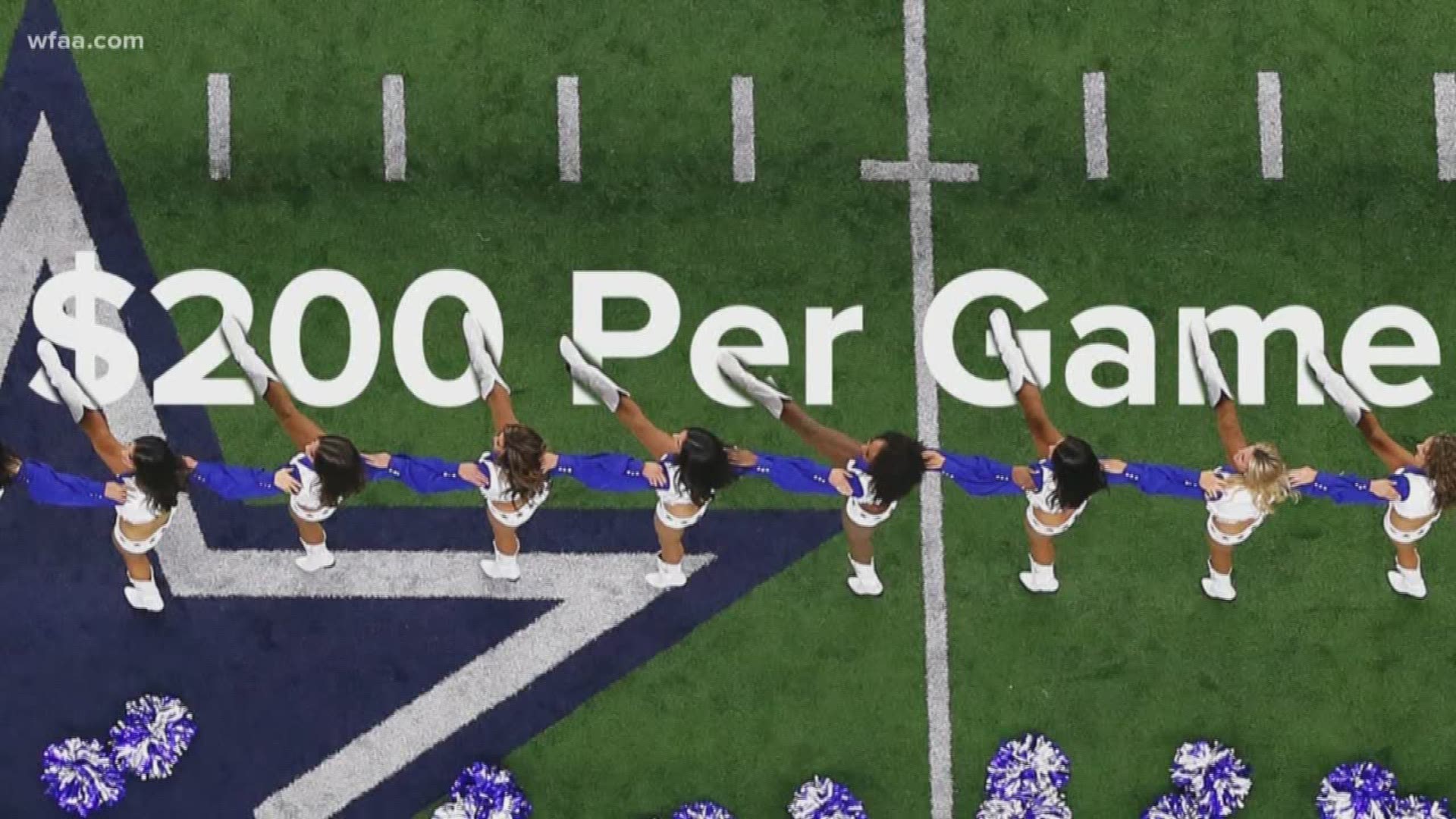 DALLAS — The Dallas Cowboys and Erica Wilkins, a former cheerleader, have apparently settled a pay dispute over how much money women athletes on the iconic cheerleading squad get paid.

The claims, which started almost two years ago and centered around claims by Wilkins that she sometimes earned less than minimum wage as a cheerleader, were scheduled for arbitration in October.

The Cowboys did not return emails from WFAA.

Wilkins’ attorney, Allen Vaught, only said the matter is resolved.

But experts said Wilkins’ case is only the latest example of female athletes earning less than their male counterparts.

“When you look at this big picture, what you see is a franchise who does not appear to value their women,” said Michelle Simpson Tuegel, a Dallas attorney.

This summer, the Dallas Cowboys reclaimed the title as the world’s most valuable sports team worth an estimated $5 billion.

Michelle Simpson Tuegel said that creates a striking contrast. She represents professional athletes but is not involved in Wilkins’ case.

“They’re not asking to be paid millions of dollars. I think this complaint is clear that what they’re asking for is the minimum standard of what federal wage requirements are and equal pay with the mascot who is a male,” Simpson Tuegel said.

She said the Dallas Cowboys paid cheerleaders $8 an hour when she was on the team and on game day only gave them $200 each.

“I remember I did an out of town appearance. It was my first year on the team meaning I'm making $100 flat rate for that appearance,” Wilkins explained. “I think it ended up being like a 16-hour day and I was paid a flat rate of $100 plus taxes being taken out of that. I think it was $88.”

Still, Wilkins said she always grew up with one goal.

"The Dallas Cowboys sent out scouts to approach girls at dance competitions and when I was approached I was 16,” Wilkins told WFAA before her case was resolved.

It didn’t take long before her years of training as a competitive dancer finally paid off.

She spent three years as a Dallas Cowboys cheerleader, posed for the swimsuit calendar and traveled overseas for the team.

But NFL cheerleaders must maintain strict schedules for practices, games and events, which, Wilkins said, makes it almost impossible to maintain a separate career outside the team.

It didn’t take long, Wilkins said, to discover that her dream did not pay the bills.

She sued the Cowboys last year after she left, claiming that even Rowdy, the team mascot, makes up to $60,000 a year.

RELATED: Former cheerleader sues Cowboys over pay, says she made less than mascot

"We've talked about the unhappiness that we feel and the unfairness, but no one speaks out about it. No one says anything because everyone is too afraid,” said Wilkins.

But it’s not just the Cowboys.

In March, the U.S. Women’s Soccer Team filed a federal lawsuit demanding the same salary as their male counterparts.

Women in sports, and in general, still make less than men despite the 1963 Equal Pay Act.

“I think the message is really loud and clear that women’s work isn’t worth that much. Women are valued for being pretty and entertaining but not valued well enough to pay them for the really hard work they do,” said Emily Martin of the National Women’s Law Center.

Since Wilkins’ dispute, she said the Cowboys have increased cheerleader pay from $8 an hour to $12 and their game-day pay doubled from $200 to $400.

“It's scary to speak out about this, especially by myself. But how else is a change gonna be made if we all just stay quiet?”