Tampa's hotel revenue for the weekend of Feb. 7 totaled $14.2 million, a jump of 166 percent year-over-year 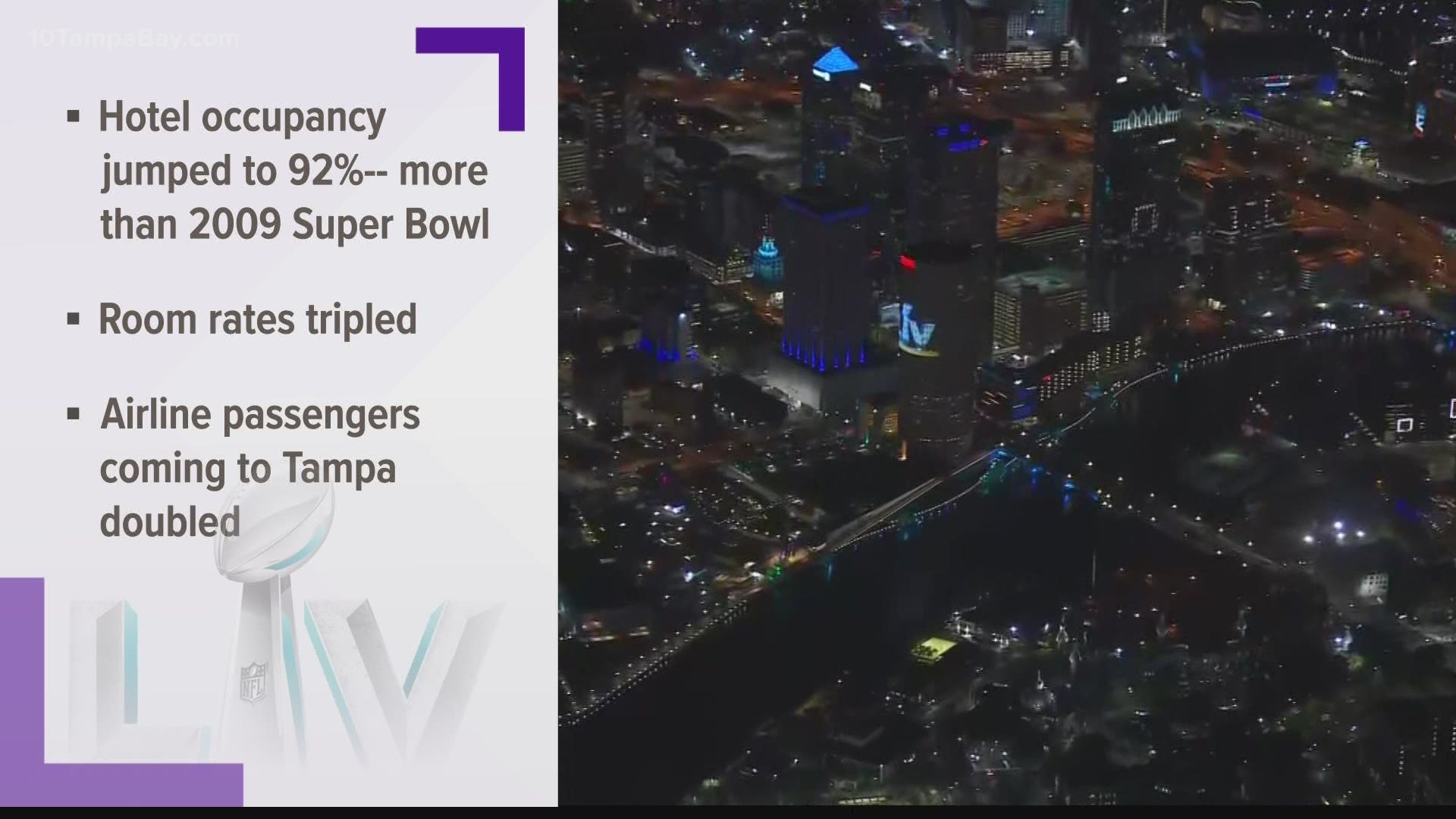 Tampa Bay was the big winner of Super Bowl LV.

And, I'm not talking about the Buccaneers.

Early numbers from Visit Tampa Bay and the Tampa Bay Sports Commission show the Tampa region scored a huge economic boost with the NFL's big game in town, even with the host Buccaneers in the game.

It's just the spark the tourism industry needed.

In recent months, fueled by the pandemic, hotel room occupancy was around 50 percent, according to Rob Higgins, the president and CEO of the Tampa Bay Super Bowl LV host committee.

"The demand, for previous weekends, was around 41,000 room nights," Higgins said. "Super Bowl weekend, it was around 67,000 as part of it...the stats you start to see shaping up from a financial impact standpoint are really strong."

The pre-Super Bowl room rate was close to $102. During the big-game weekend, that nearly tripled, to $300.

On Feb. 6, the day prior to Super Bowl LV, occupancy rate topped out at 93.8 percent, and $7.2 million in total revenue.

Overall, Hillsborough County hotels for the weekend of Feb. 6-7 pocketed a total of $14.29 million in revenue, a jump of 166 percent year-over-year, and that month - February 2020 - was already the second-best hotel revenue month in county's history.

“This preliminary data highlights only the impact to the hotel industry and not the whole economic impact, but it does speak to the hard work and resilience of this destination and all of those partners involved,” Santiago C. Corrada, president and CEO of Visit Tampa Bay, said in a release.

“We were handed several unique challenges, but our community came together and ultimately proved that even with more hotel inventory, a hometown team and a pandemic, this destination was poised to host one of the most memorable, impactful games at a critical time in our history. We couldn’t be prouder of how our community rallied to pull this off.”

Air travel to Tampa saw a bump from the big game too, with fans pouring in to Tampa Bay to engage with the Super Bowl Experience along the city's Riverwalk, along with Armature Works, International Plaza and Bay Street, and Seminole Hard Rock Hotel & Casino.

Visit Tampa Bay research shows the top visitors from out of town were from the Orlando, Kansas City, Miami, New York, Dallas and Atlanta areas.

Higgins notes airline passengers were more than double for the four-to-five days around Super Bowl weekend, compared to recent months during the pandemic.

"You can debate a lot of things, but these are indisputable factors," Higgins said. "If somebody travels here, comes here, stays for a handful of days and then leaves, they're definitely spending money in our community. To know what they've done from a hotel spending standpoint is tremendous."

One additional metric Higgins is waiting for is the media value of having the biggest sporting event in the world in Tampa Bay's backyard. From the Tampa Riverwalk, to St. Pete Beach and areas in between, the best of the region was on display for everyone to see.

"What we analyze is the broadcast mentions, mentions in articles, print, on the radio, the web and social media wise to understand how much our community's name and story is getting out there," Higgins said.

For more on the impact of Super Bowl LV on Tampa Bay and our chances of landing a future Super Bowl, check out the final episode of the Tampa Bay 55 podcast, hosted by 10 Tampa Bay's Ryan Bass and featuring Higgins.