Super Bowl LV: 10 unique facts about the game being played during a pandemic

This year's Super Bowl is historic in several ways. 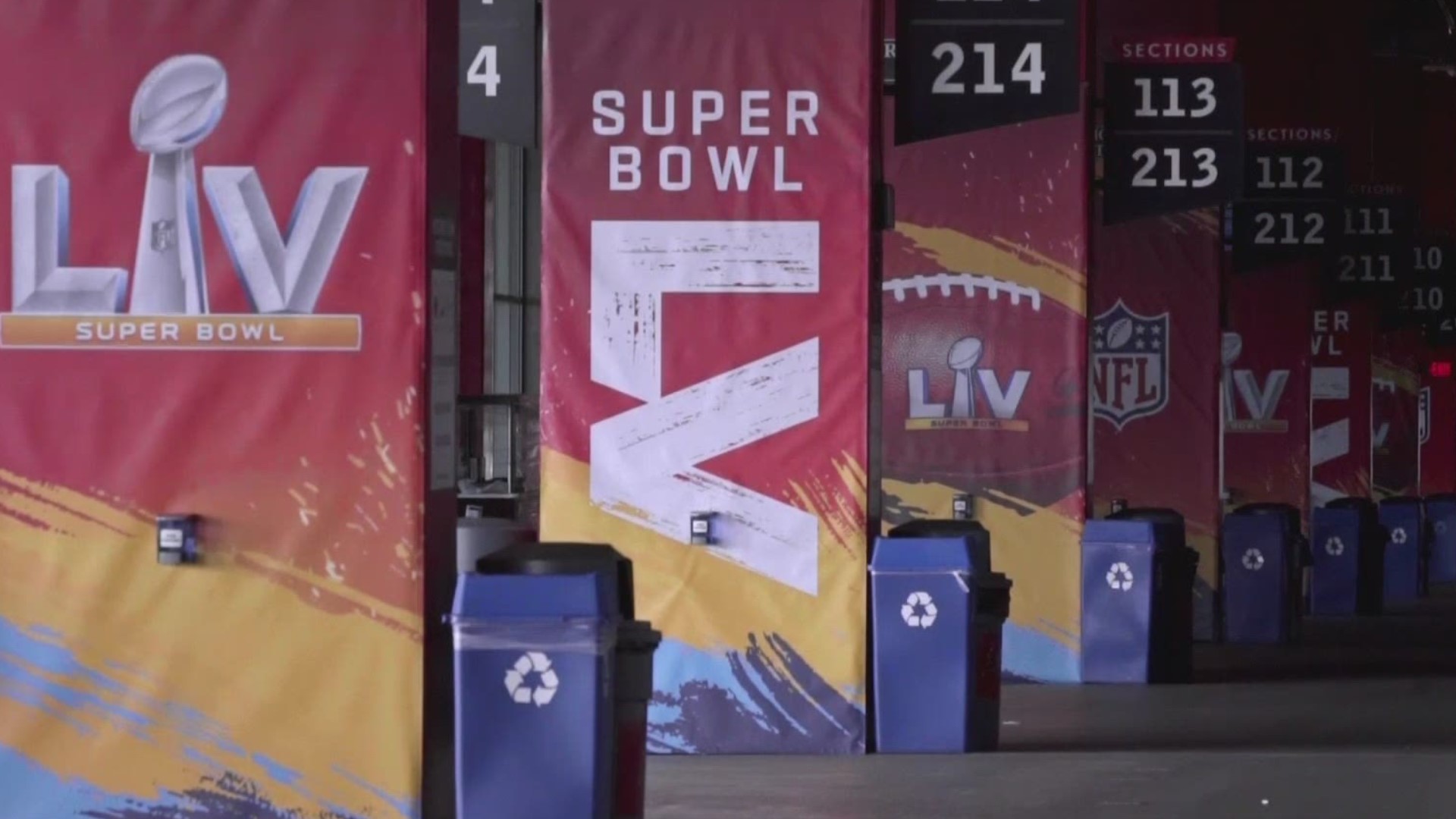 TAMPA, Fla — When the Tampa Bay Buccaneers and the Kansas City Chiefs take the field on Feb. 7, it will truly be a Super Bowl unlike any other. It will be the first to be played amid a global pandemic, marking the end of a full NFL season played in spite of the COVID-19 threat. With that in mind, we've narrowed down the top ten unique facts and firsts you'll see in Super Bowl LV.

The stadium concession stands will be cash-free for the first time in the Super Bowl's 55-year history. This follows a trend we've seen in other sporting venues, including Tropicana Field and Amalie Arena. Cards and mobile payments will be accepted inside Raymond James Stadium.

.@TampaSportsAuth has put approx. $8M into @RJStadium to produce an "almost touchless experience" for fans!

Check out the full interview w/ @EHart_TSA, President/CEO of the Tampa Sports Authority, as he discusses prep for #TampaBayLV and more!

This Super Bowl will be the first not to be played in a full stadium since the inaugural AFL-NFL Championship Game in 1967, which failed to sell out. Because of COVID-19, the NFL restricted the seating capacity at Raymond James Stadium to 22,000. That number includes 7,500 very special guests.

NFL Commissioner Roger Goodell extended the largest invite ever to a single group of people for a Super Bowl. More than 7,000 vaccinated health care workers from around the country will attend Super Bowl LV as a way to give thanks for their hard work during the pandemic. Many will come from Bay Area hospitals, although all 32 NFL teams are able to extend their own invitations.

THANK YOU!!! Tight end @RobGronkowski personally invited two Tampa Bay health care heroes to #SuperBowlLV on behalf of the @NFL and the @Buccaneers 🙌

Country star Eric Church and R&B singer Jazmine Sullivan will perform "The Star-Spangled Banner" as a duet prior to kickoff. This will be just the second duet for the national anthem at a Super Bowl. Aretha Franklin and Aaron Neville teamed up to sing at Super Bowl XL in 2006.

A Woman on the Field

Who run the world? Girls! Down judge Sarah Thomas will become the first female game official in a Super Bowl. The mom of two has been an NFL official since 2015.

Women on the Sideline

Thomas is not the only woman making Super Bowl history. The Bucs will have two female coaches on their sideline -- assistant defensive line coach Lori Locust and assistant strength and conditioning coach Maral Javadifar. Head coach Bruce Arians hired Locust and Javadifar when he took over the team in 2019.

This Super Bowl will be the first to match up the two previous winning quarterbacks. The Bucs' Tom Brady won Super Bowl LIII with the New England Patriots, while the Chiefs' Patrick Mahomes led his team to victory in Super Bowl LIV last year.

When Tom Brady takes the field to lead the Bucs offense, he'll break his own record as the oldest Super Bowl starting quarterback. He'll be 43 years, 188 days old. Brady is already the fifth-oldest QB to play in any NFL game.

"What more can you say about Tom Brady? He already submitted his legacy with the previous 9 and now number 10 it just separates himself from everybody else that much more." @stevebeuerlein says this Super Bowl appearance helps separate Brady from Belichick and the Patriots. pic.twitter.com/U1IqqCQHow

Bruce Arians is also proving you're never too old. The 68-year-old leader of the Bucs will be the oldest coach to make his Super Bowl debut. It's an incredible feat for a man who didn't get his first NFL head coaching job until he was 60.

First Team to Play a Super Bowl at Home

Last, but never least, the Bucs are the first team to make it to a Super Bowl on their own home field. They'll enjoy many of the comforts of home, with one notable exception: the iconic pirate ship behind the north end zone has been removed, just as it was the first two times Raymond James Stadium hosted a Super Bowl. But despite the Bucs' home-field advantage, the Chiefs are going in as a slight favorite.