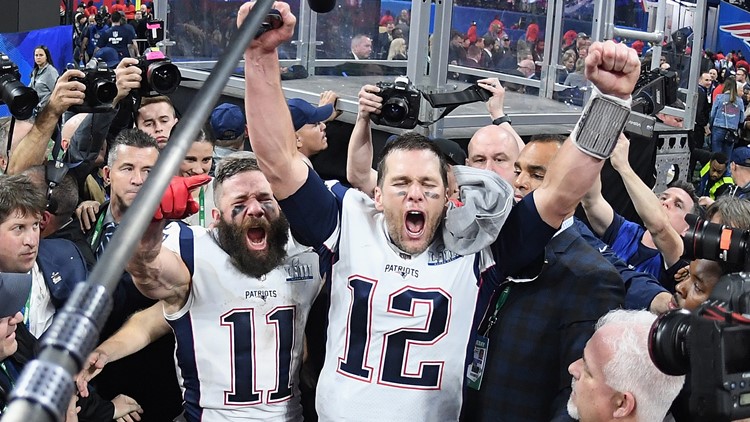 Photo by: Getty Images
Julian Edelman and Tom Brady celebrate at the end of the Super Bowl LIII on Feb. 3, 2019, at Mercedes-Benz Stadium in Atlanta, Georgia. The New England Patriots defeated the Los Angeles Rams.

Why do most Super Bowl MVPs scream 'I'm going to Disney World'?

Around 2:40 p.m. ET Monday, Brady and Edelman are scheduled to be at the Magic Kingdom theme park for a parade and celebration.

Edelman was named most valuable player of Sunday’s game. It marked Brady’s sixth Super Bowl win in his career, which is a record.

The Super Bowl MVP typically shouts the phrase while celebrating his Super Bowl win with his teammates.

In Disney CEO Michael Eisner’s memoir, he credited his wife, Jane, with the idea for the campaign. WKMG reports the Eisners were at dinner with Dick Rutan and Jeana Yeager, the first people to fly around the world without stopping.

"Well, now that you've accomplished the pinnacle of your aspirations, what could you possibly do next?" Michael Eisner asked Rutan and Yeager.

That’s how the idea of the slogan was born.

New York Giants quarterback Phil Simms was reportedly paid $75,000 for his participation for saying the slogan in a Disney commercial after the Super Bowl XXXI on Jan. 25, 1987.

SB Nation reported the commercial has aired after every Super Bowl since 1987, except in 2005.