The Bolts made their way along the Hillsborough River to celebrate their Stanley Cup victory with all of Tampa Bay. 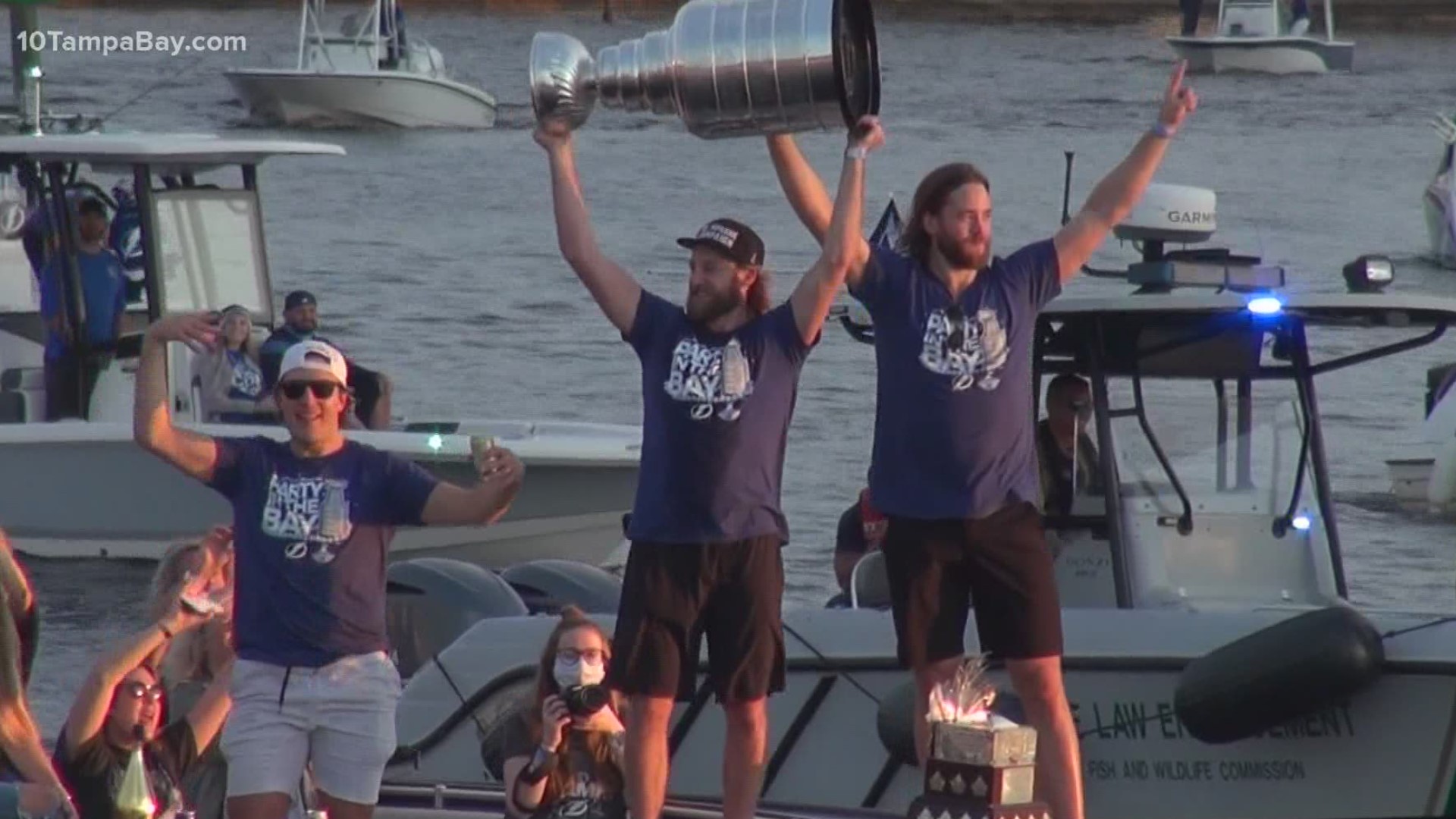 TAMPA, Fla — The Tampa Bay Lightning are back in town, and they brought a special guest back with them: the Stanley Cup.

After beating the Dallas Stars 2-0 Monday night in Game 6 on the Stanley Cup Final, the Bolts are out of the NHL bubble and ready to celebrate.

What's a better and more Tampa Bay way to celebrate than a boat parade?

On Wednesday, your 2020 Stanley Cup Champs made their way along the Riverwalk and Hillsborough River to celebrate their victory with fans.

If you missed it, you can see the highlights below.

The Captain, The MVP and The #StanleyCup The new Tampa Triplets #GoBolts @10TampaBay @RealStamkos91 pic.twitter.com/LaQ3Mutaat

And the Sea-Doo comes out! Alex Killorn takes the Cup for a spin while Steven Stamkos hops on the back!

Your Captain finally gets to drink from the #StanleyCup!!! pic.twitter.com/pMXk0Gp1om

GO BOLTS! The Base Commander and Air Crew at MacDill Air Force Base are getting ready to head to the skies for a flyover tonight in the support of the Lightning. Thank you to these Air Force heroes for their service!

The Base Commander and Air Crew at @MacDill_AFB for tonight's flyover are showing their @TBLightning pride!!!

Thank you for your service and #GoBolts! 🇺🇸 pic.twitter.com/Gc0ZzpHt8u

Fans are continuing to line both sides of the river as they wait to see that glorious Stanley Cup and the team who got it done for the first time since 2004!

Park filling up on both sides of the river as we wait for @TBLightning to pass by with the #StanleyCup#GoBolts bringing #TampaBay together regardless of the year we’ve had, and this might not be the only opportunity! We’ve still got @RaysBaseball + @Buccaneers 😉@10TampaBay pic.twitter.com/fHNbqJ80ZI

YOU LOVE TO SEE IT! ⚡️🏆 #GoBolts #StanleyCup pic.twitter.com/gxYsMYVpre

The energy is high Bolts fans! The Stanley Cup is out, the boats are boarded and the fans are R-E-A-D-Y.

Well...that's one way to celebrate. A Fan was seen with his own "Stanley Cup" while riding in the Hillsborough River.

HYPING UP THE CROWD 🏆: This @TBLightning fan has his own #StanleyCup and has been pumping up the crowd along the Hillsborough River before the Bolts get here! That’s one way to get the party started! 😂⚡️ #GoBolts @10TampaBay pic.twitter.com/uIlgoAnAam

Fans are out along the parade path, awaiting a glimpse of the Stanley Cup!

What could make Tampa more beautiful than it already is?

Fans are ready to catch a glimpse of the trophy & your champion @TBLightning floating along the Hillsborough River! #GoBolts #StanleyCup https://t.co/pIcAhHGmho