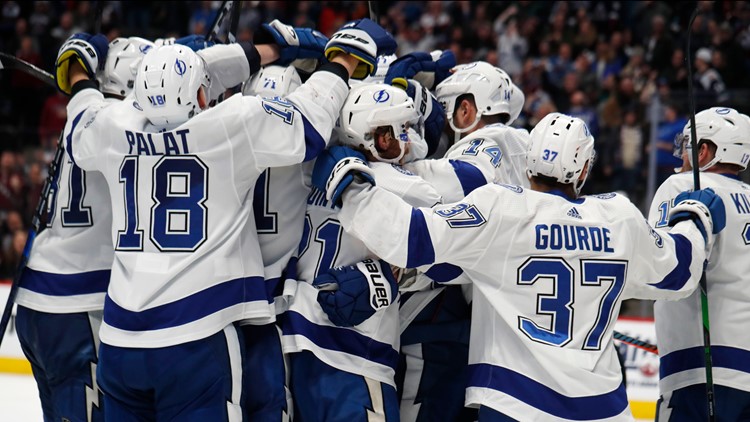 Photo by: AP
Tampa Bay Lightning right wing Nikita Kucherov is mobbed by teammates after scoring the winning goal in overtime of an NHL hockey game against the Colorado Avalanche Monday, Feb. 17, 2020, in Denver. The Lightning won 4-3. (AP Photo/David Zalubowski)

ST. PETERSBURG, Fla. — On Dec. 21, many across Tampa Bay were picking out the perfect jacket for the office holiday party or readying their home for family and friends to visit.

The Lightning was floundering. They looked outmatched for the second time that month against the Washington Capitals and sat in the bottom half of the Eastern Conference.

The Caps and Bruins were both more than 20 points ahead in the Conference standings.

The Bolts looked like a shell of the team that ran away with the President's Trophy the year before. Had last season's first-round sweep out of the playoffs broken the league's most-talented roster?

Since that dreadful December day, they've left no doubt. It hadn't.

Jon Cooper's squad has won 23 of the 26 games they've played and reeled off two 10-game win streaks in the span. Their current run sits at 11 and counting.

The Caps are now in their rear-view mirror. The Bruins are only team between them and a repeat finish at the top of the league -- just one point ahead.

Tampa Bay's biggest difference-maker in the run has been guarding their own goal.

The Lightning has allowed three or fewer goals in 22-straight games. In that stretch, they're 19-2-1. And narrowing it to their games since the turn of the decade, Tampa Bay has allowed a league-low 1.71 goals per game.

The team has focused on limiting bad turnovers and easy scoring chances for their opponents throughout the run, but whenever they've needed a big game in goal, they've gotten it.

Andrei Vasilevskiy has returned to form in net. He's had a sub-90 percent save percentage just twice in the span and posted two shutouts as well.

And the defense is helping him out. Vasy has faced 30 or fewer shots 10 times since Dec. 21.

The Lightning's star power has shined bright during this run, but it's the support from the underappreciated talent that has made a major difference.

The Bolts have missed Steven Stamkos, Nikita Kucherov and Ryan McDonagh for multiple games over the past few weeks and haven't missed a beat.

But the Bolts still flash best when the stars are out.

Kucherov missed some time during the streak, but he's been superb when he's been on the ice. Kuch has posted at least one point in each of the last 14 games he's played in including last night's, overtime game-winning goal in Colorado.

The Captain isn't far behind. Stamkos has found the back of the net 27 times on the year and has an active 12-game point streak with 10 goals and eight assists.

The Lightning looks to keep the magic going in Sin City against the Golden Knights on Thursday. Puck drop is set for 10 p.m. eastern time.

The Bolts will then travel to Arizona for a battle with the Coyotes before returning home Feb. 25 to Amalie Arena.