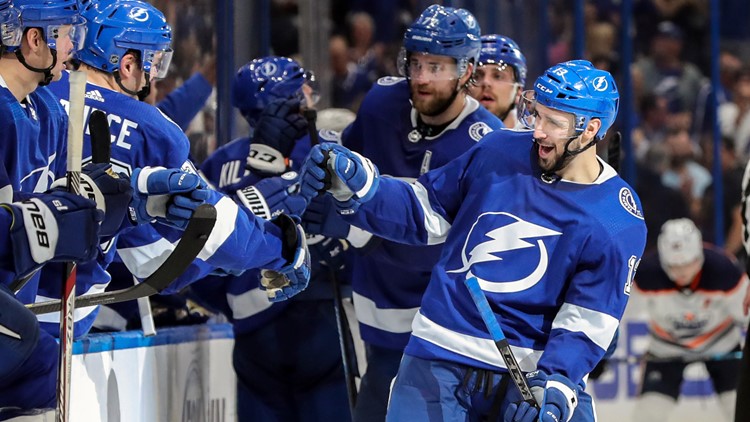 Photo by: AP
Tampa Bay Lightning's Cedric Paquette is congratulated on his empty-net goal against the Edmonton Oilers during the third period of an NHL hockey game Thursday, Feb. 13, 2020, in Tampa, Fla. The Lightning won 3-1. (AP Photo/Mike Carlson)

TAMPA, Fla. — No Stamkos. No Kucherov. No problem for the Lightning.

The Oilers weren't without injury issues of their own. Hart Trophy candidate Connor McDavid was out with a quad issue.

Despite the lineup changes, the Lightning dominated the first period on the shot sheet but couldn't find the scoreboard.

The Bolts finally broke the scoreless tie in the second. Just over four minutes into the period, Maroon corralled a shot off the boards and tucked the puck behind Oilers goalie Mike Smith to take an early lead.

Edmonton evened the score a few minutes thanks to a fortunate bounce.

Ondrej Palat blocked Caleb Jones' initially shot, but the puck fell back on Jones' stick. He was able to find the back of the net on the second attempt and knot the score at 1.

The Oilers looked to take the lead later in the period when Alexander Volkov went to the box.

But it was the Lightning who struck shorthanded.

Yanni Gourde forced a turnover in the neutral zone, outraced the Oilers back down the ice and finished top shelf to take the lead for good.

The Lightning did still need some heroics between the pipes from Andrei Vasilevskiy. The 'Big Cat' made a big save on a Leon Draisaitl wrister after a cross-ice pass found him alone on the backside.

Paquette added an empty-netter with under a minute remaining.

The Bolts return to action on Saturday at 4 p.m. against the Flyers at Amalie Arena.

RELATED: Child losing sight gets to skate with Lightning players