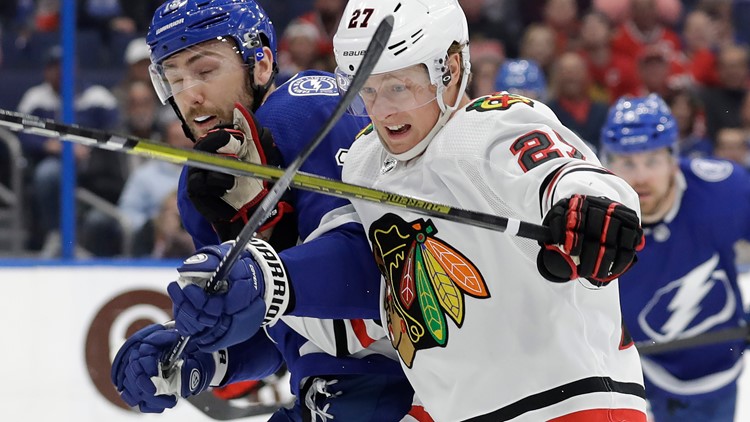 Photo by: AP
Chicago Blackhawks defenseman Adam Boqvist (27) and Tampa Bay Lightning center Barclay Goodrow (19) gets the sticks up as they chase a loose puck during the first period of an NHL hockey game Thursday, Feb. 27, 2020, in Tampa, Fla. (AP Photo/Chris O'Meara)

TAMPA, Fla. — Seven days ago, the Lightning looked unbeatable as the hottest team in hockey heading into Las Vegas.

Tonight, they left Amalie Arena deflated after a third period collapse to the Chicago Blackhawks that extended their losing streak to four games.

After the first two periods, the Bolts looked like the dominating squad from the past two weeks. The team led 1-0 after two periods and took a 2-0 lead early in the 3rd.

The Blackhawks allowed five straight goals to close out the game with much of their issues coming on their own accord.

"We had a good control of that game, to be honest, and then pucks started going in the net," said Lightning coach Jon Cooper. "All of a sudden it's 4-2. It ends up overshadowing a lot of the good things we did for most of that game."

The biggest struggle for the Lightning recently has been finding a consistent power play. The Bolts were 0-for-5 tonight with the man advantage and, in recent games, they've only scored on 6 of their last 66 power plays.

Lightning center Brayden Point said tonight's game is a tough one to judge their performance on with Steven Stamkos and Pat Maroon out.

"Tonight, [it was] a new unit... guys in different spots. We were just trying to throw pucks at the net, hit a crossbar there and the other groups had some good looks too."

Tampa Bay is back in action on Saturday against Calgary.