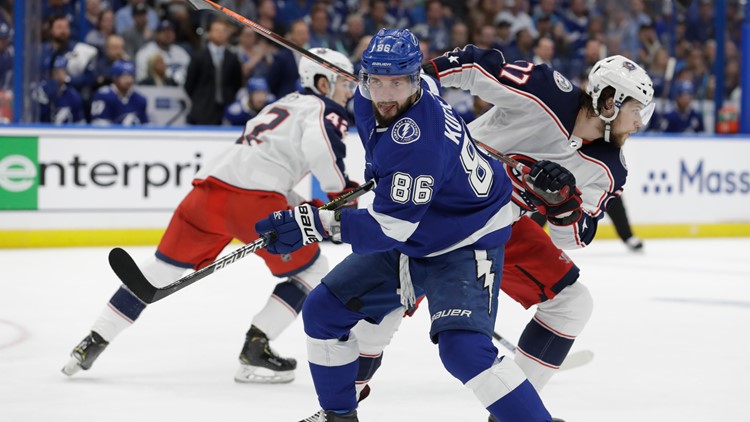 COLUMBUS, Ohio — Final score: The Blue Jackets take out the Tampa Bay Lightning 3-1 in Game 3. The next game will be in Columbus Tuesday night.

Lighting score: Finally in the third period Palat scored for the Lightning! The score is now 2-1, Columbus up.

Another one: Columbus Blue Jackets score again in the second period. They're now leading the Tampa Bay Lightning 2-0.

The starting lineup: The Lightning kick off the game with Palat, Point, Johnson, McDonagh, Cernak and Vasilevskiy.

Bottom Line: The Columbus Blue Jackets host the Tampa Bay Lightning in the Eastern Conference first round with a 2-0 lead in the series.

The Blue Jackets are 22-17-2 at home. Columbus has scored 34 power-play goals, converting on 15.4 percent of chances.

Steven Stamkos leads the Lightning with 45 total goals and has totaled 98 points. Nikita Kucherov has four goals and five assists over the last 10 games for Tampa Bay.