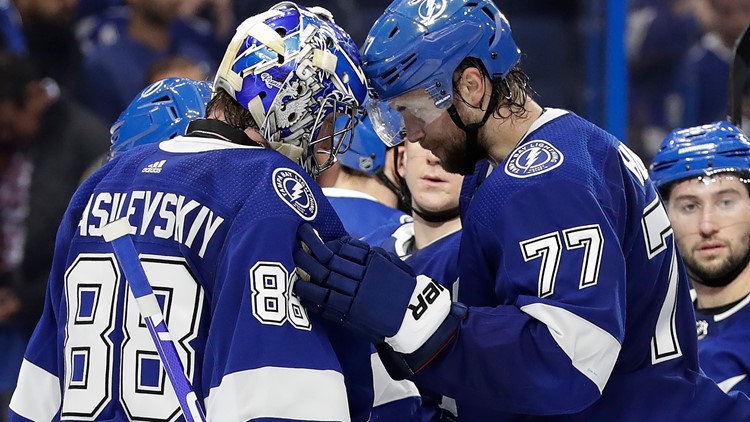 TAMPA, Fla. — A slow start cost the Lightning in Tuesday's loss to the Bruins. Thursday, they made sure the same wouldn't happen against the Canadiens.

Forty-nine seconds is all it took for the Bolts to take the lead for good en route to a 4-0 blanking of Montreal. The Bolts get a much-needed win after losing five of their previous six contests.

On Tampa Bay's first possession of the game, Nikita Kucherov found Viktor Hedman streaking uncovered through the center of the offensive zone. The defenseman rifled one between the legs of Montreal goaltender Carey Price to open the scoring.

The goal was Hedman's first since December 23 when he posted two against the Florida Panthers. The streak covered 31 games.

Later in the first, a great play in the defensive zone from Anthony Cerelli gave the Bolts a 2-on-1. Cerelli fed Alex Killorn across the ice who scored his 25th goal of the season off the post.

The scoring slowed in the second until the Nikita Kucherov and Pat Maroon connected to find the back of the net. The Bolts star got just enough of Maroon's crossing pass to slip it behind the goaltender.

The goal gave Kucherov his 26th multi-point game of the season.

Hedman then capped off the night's scoring with a power-play goal late in the third period.

The shutout was the third of the season for Andrei Vasilevskiy - his first since doing so in back-to-back games in early January. The Lightning's goaltender extended his lead on the rest of the league with his 34th victory.

RELATED: Distance between 1st and 2nd place widens with Boston win over Tampa

The victory gives the Bolts some much-needed momentum heading into their upcoming three-game road trip.

To start it off, the Lightning play their second game this week against the league-leading Bruins on Saturday. This time, the two match-ups in Boston. Then it's on to Detroit on Sunday and Toronto on Tuesday before returning to Amalie Arena on Thursday against the Flyers.