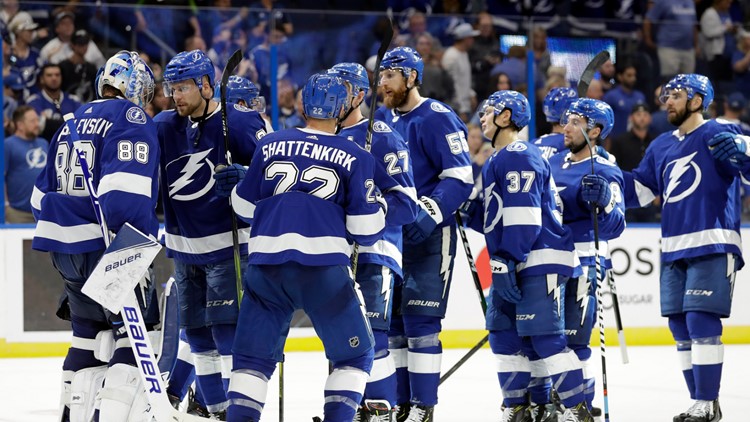 Reigning NHL MVP Nikita Kucherov had a goal and an assist, while Ondrej Palat snapped a third-period tie with a power-play goal that helped last season’s Presidents’ Trophy winners begin with a 5-2 victory over the Florida Panthers on Thursday night.

Kevin Shattenkirk and Pat Maroon also scored in their Tampa Bay debuts, and the Lightning overcame some sloppy play to ruin Bobrovsky’s first game for the Panthers, who are counting on the two-time Vezina Trophy winner to help transform them into a playoff team.

“Listen, it was Game 1 and there was a lot of the game I liked,” Lightning coach Jon Cooper said. “Did we get bit a little bit by the turnover bug? ... We did.

“As a whole, can we be better a team? There's no question. But it’s Game 1. I look at the big picture. We came here to get two points.”

Andrei Vasilevskiy stopped 35 shots for Tampa Bay, which extended its winning streak in season openers to a league-best six.

“We're creating a lot of chances. We should have scored a lot more,” Panthers forward Aleksander Barkov said. “We want to win games. This is not good feeling.”

The Lightning tied the NHL record with 62 wins last season, yet failed to win a single game in the playoffs, where they were swept in the first round by Bobrovsky and the Columbus Blue Jackets.

Bobrovsky, who led the NHL with nine shutouts last season, was 4-0 with a .932 save percentage during that series.

"I feel good. I felt comfortable there. I had the good energy, I had the good attitude,” Bobrovsky said. “Obviously we'd love to have the 'W' ... but it is what it is. It's a long season. We move on."

Mike Hoffman scored in the second period for the Panthers, who got a short-handed goal from Vincent Trocheck to briefly make it 2-all at 8:49 of the third. Palat countered on the same power play, putting Tampa Bay ahead for good.

Mikhail Sergachev had assists on each of Tampa Bay’s first three goals. Alex Killorn also assisted on Shattenkirk’s goal midway through the second period before picking up another on Palat’s go-ahead score.

Cooper said there was nothing different about Tampa Bay’s approach to attacking Bobrovsky in his Panthers debut.

“Bobrovsky is a world class goalie. You have to have good goals to beat him,” the Lightning coach said. “Tips, rebounds and pucks that are laying there you've to put in, and we did tonight.”

Notes: Bobrovsky stopped 25 of 29 shots. ... The Lightning played without forward Brayden Point, who’s recovering from offseason hip surgery. The 23-year-old rising star, who last month signed a $20.25 million contract as a restricted free agent, could return before the end of the month. ... Panthers D Keith Yandle played his 798th consecutive game, the longest active streak in the NHL and fifth-longest in league history. ... This is the third straight year the Lightning and Panthers have opened the season against each other.

UP NEXT: The intrastate rivals meet again Saturday in Sunrise, Florida