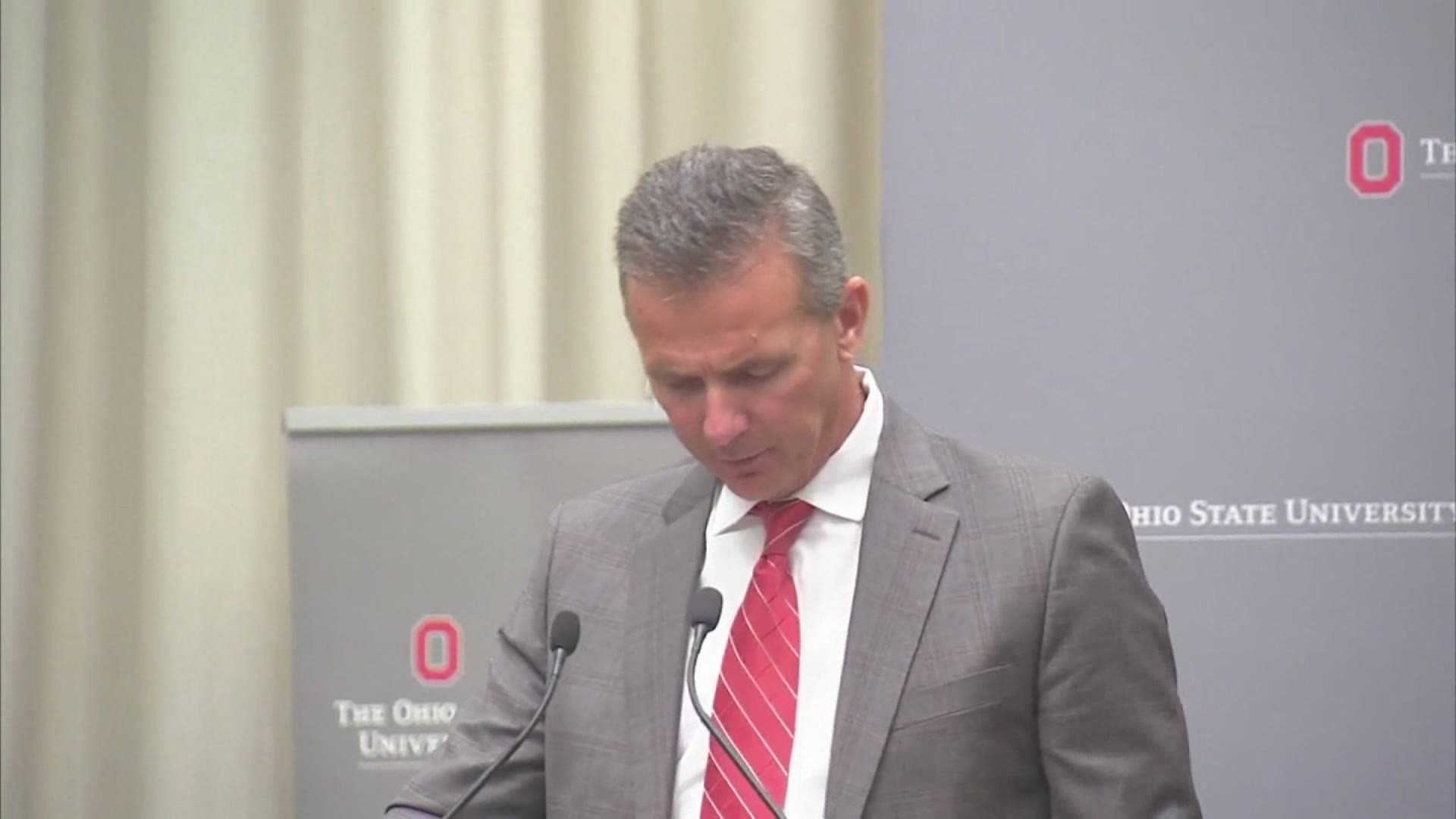 COLUMBUS, Ohio – Ohio State University has announced plans to suspend national championship Head Football Coach Urban Meyer without pay for three games following an investigation into how he dealt with domestic violence accusations against a former member of his coaching staff.

Meyer is suspended through Sept. 2, 2018 and for the games on Sept. 1, 8, and 15 without pay. He will not be allowed to work with the team at all through the Oregon State game. At that point, he will be allowed to coach practices while still being prohibited from attending the next two games.

Ohio State announced that Athletic Director Gene Smith would also be suspended without pay between Aug. 31 and Sept. 16.

"I have ultimate authority and oversight and I’m accountable for the athletic department, and in particular, the football program," Gene Smith said. "I could have done a better job in this particular instance.”

The announcement came after the 20-member board of trustees met for 11 hours Wednesday to discuss the findings of an independent panel they had appointed to conduct a two-week investigation that culminated in a report about what Meyer knew of the domestic violence allegations.

"The discipline reflects our collective judgment of the report," Ohio State President Michael Drake said. "The board fully supports this conclusion."

Meyer: "Ultimately, I'm responsible for everyone's behavior in the football department...so I fully support our president's decision, and respect it."

How we got here

Meyer, 54, who served as head coach at the University of Florida from 2005-2010, was placed on administrative leave on Aug. 1 while Ohio State investigated his handling of domestic abuse allegations against former wide receiver coach Zach Smith.

"I wish I could go back and make different decisions, but I can't," Meyer said after his suspension was announced.

A key part of the investigation examined misleading comments Meyer made at Big Ten Media Days.

At the July 24 event in Chicago, Meyer claimed not to have known about 2015 domestic abuse accusations involving Zach Smith and Smith’s ex-wife Courtney. At that time, Meyer claimed he knew only about similar allegations against Zach Smith in 2009 when they both worked in Florida.

Meyer later admitted to knowing about the 2015 allegations – but said he followed proper protocol and reported them. He did not say to whom he reported the information about Zach Smith.

"I was not being as complete and as accurate at media day as I should have been," Meyer said Wednesday.

Zach Smith was fired in July.

The Ohio State investigation concluded Meyer did not "deliberately" lie during Big Ten Media Days and would not have hesitated to fire a coach if he knew -- for sure -- the coach was physically abusing another person.

Investigators determined Meyer and Athletic Director Gene Smith initially did not believe they had sufficient evidence to begin disciplinary actions against Zach Smith without any action by law enforcement. Ohio State said the two simply did not understand their reporting obligations and should have done more to uphold university values; but they did not violate any rules.

In 2009, Gainesville police officers arrested Zach Smith for aggravated battery of his pregnant wife, who did not press charges. Investigators said Zach and Courtney argued when he brought a female co-worker home from a party.

A police report said Zach had asked his then-wife to let the woman spend the night. During the argument, Zach allegedly grabbed his wife by her T-shirt and threw her into a bedroom wall.

Courtney was 8-10 weeks pregnant at the time.

Six years later, in 2015, police in a Columbus suburb visited Courtney’s home twice – once on suspicion of domestic violence and felonious assault and later for stalking, according to the Columbus Dispatch.

Zach Smith was not arrested either time.

Editor's Note: 10News does not typically identify alleged victims of domestic violence, but Courtney has chosen to speak publicly about the accusations.

Below, watch the interview Courtney gave earlier this month.

A brief history of Urban Meyer

During Meyer's five years in Florida, he led the Gators to national championships in 2006 and 2008 and helped groom sports star Tim Tebow in the role of quarterback.

The Gators finished No. 3 in the Amway Coaches Poll in 2009.

But, the program frequently found itself in the spotlight for player misconduct off the field. In fact, 31 players were arrested under Meyer's regime.

Former NFL tight end Aaron Hernandez was involved in two separate incidents while playing for the Gators under Meyer. In once incident, Hernandez punched a restaurant employee and ruptured the victim's eardrum. In the other incident, he became a person of interest in a shooting. This was all before he was found guilty of first-degree murder in 2015. He would later die by suicide.

Meyer suffered a health scare in 2009 and stepped down in 2010 with a 65-15 record at the University of Florida. He spent most of the 2011 season working as an analyst at ESPN.

He was hired by Ohio State in November of that year. And, the Buckeyes went 12-0 in his first season with the team.

USA TODAY contributed to this report.

College football reporter Brett McMurphy is credited with breaking the story about Meyer and Smith.