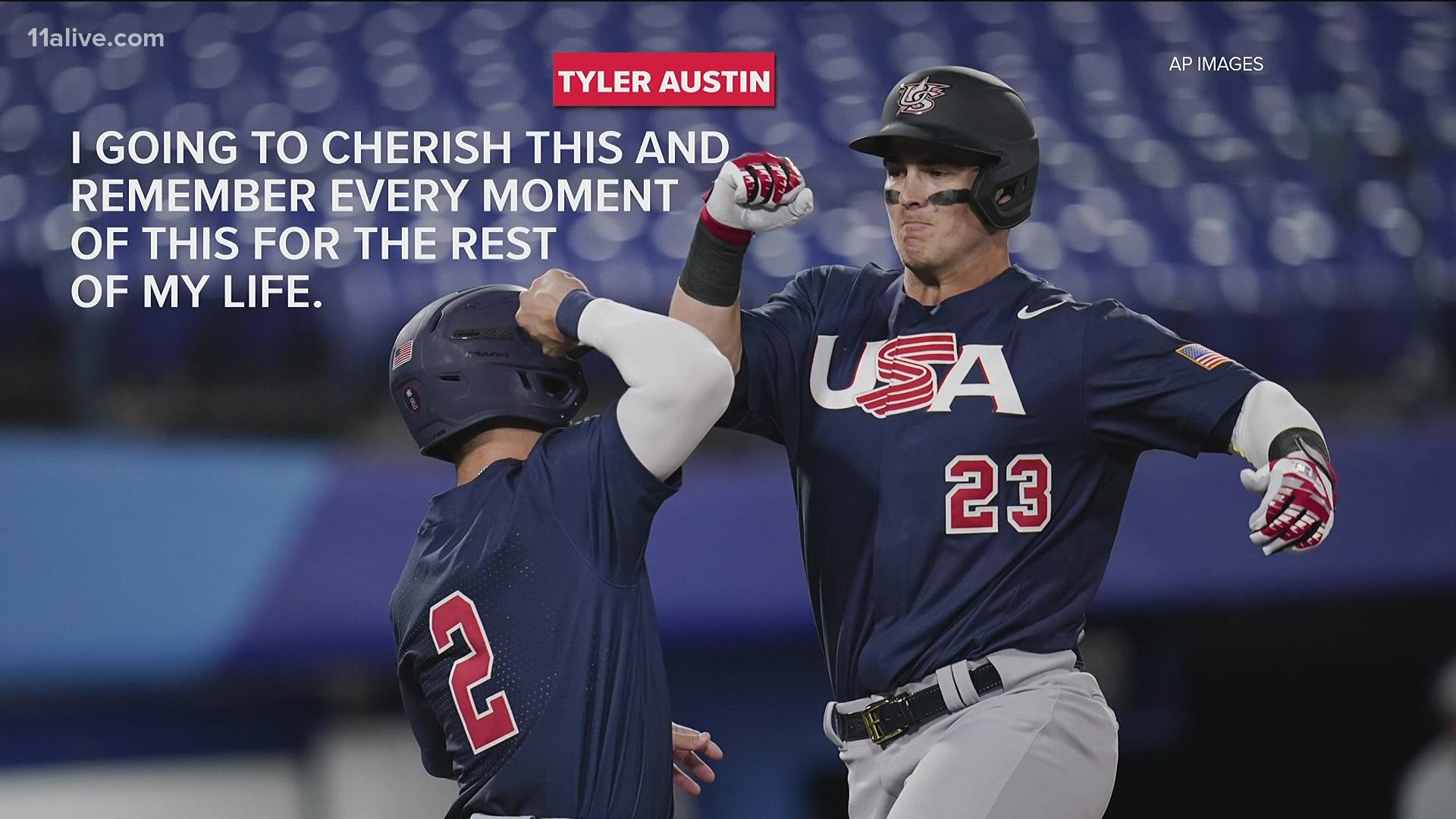 Katie Ledecky made more history for the U.S. in the pool. Same for Caeleb Dressel.

Elaine Thompson-Herah made her history on the track.

Ledecky won the 800-meter freestyle, finishing her grueling Olympic program with a third straight victory in a race she hasn't lost since 2010. Dressel captured his third gold medal of the Tokyo Games with a world record in the 100-meter butterfly.

The 24-year-old Ledecky became the first female swimmer to earn six individual gold medals in her career. She won two golds and two silvers in Tokyo.

Dressel still has some work to do.

The world's greatest swimmer advanced in the men's freestyle semifinals with the top final time of 21.42 seconds. But Dressel lost out on another medal opportunity when he had to rally the U.S. to a fifth-place finish from the anchor leg of the new 4x100-meter mixed medley.

The Australian women added another gold when Kaylee McKeown completed a sweep of the backstroke events with a victory in the 200. Britain's team of Kathleen Dawson, Adam Peaty, James Guy and Anna Hopkin claimed the gold in the new mixed relay with a world record of 3:37.58.

Thompson-Herah broke Florence Griffith Joyner's 33-year-old Olympic record in the women's 100 meters, pointing at the scoreboard even before crossing the line in 10.61 seconds Saturday to defend her title and lead a Jamaican sweep of the medals.

Thompson-Herah beat her top rival, Shelly-Ann Fraser-Pryce, by .13 seconds. Shericka Jackson, who moved to the shorter sprints for the Tokyo Olympics, won bronze in 10.76.

No Olympic champion had broken 10.7 since Flo Jo back in the day. Thompson-Herah wasn't sure she would either as she approached the finish. But "I knew that I won," she said.

"The pointing, I don't know what it means. To show that I was clear," she said.

The U.S. men's basketball team is headed to the quarterfinals at the Tokyo Games. Jayson Tatum scored 27 points, Kevin Durant added 23 and the U.S. defeated the Czechs 119-84 to clinch a berth in the knockout stage.

Zach LaVine scored 13 points and Jrue Holiday had 11 for the U.S. The Americans shot 7 for 20 in the first quarter — then made 33 of 44 shots over the next 26 minutes, including a staggering 21 for 25 start to the second half.

The U.S. finished second behind France in Group A, but will join the French, Australia and the winner of Sunday's game between Slovenia and Spain as a top-four seed for Tuesday's quarterfinals based on FIBA's tiebreaker system that includes point differential.

Blake Schilb scored 17 for the Czech Republic, which led by 10 early and was still up 60-54 midway through the third quarter.

Novak Djokovic is leaving the Tokyo Olympics without any medals.

The top-ranked Djokovic lost his cool and abused his racket several times during a 6-4, 6-7 (6), 6-3 loss to Pablo Carreño Busta of Spain in the bronze medal match of the tennis tournament.

It was Djokovic's third defeat in two days and it came less than 24 hours after he was beaten by Alexander Zverev of Germany in the semifinals. That ended his bid for a Golden Slam, which is winning all four Grand Slam titles and Olympic gold in the same year.

Djokovic, who also lost with Serbian partner Nina Stojanovic in the mixed doubles semifinals on Friday, played a total of 16 sets over seven matches in four days.

He was due back on court later Saturday for one final match in Tokyo. He and Stojanovic were scheduled to face the Australian duo of Ash Barty and John Peers for the bronze medal in mixed doubles. But Djokovic withdrew from that match citing a left shoulder injury — handing the bronze medal to Australia.

Belinda Bencic of Switzerland won the women's tennis gold medal in singles, and she might not be done.

The 12th-ranked Bencic beat Marketa Vondrousova of the Czech Republic 7-5, 2-6, 6-3 for the first major title of her career.

Xander Schauffele is 18 holes away from a gold medal, and the podium still feels a long way off.

Schauffele, a 27-year-old American golfer whose mother was raised in Japan, didn't have a lot go his way until he finished on a strong note, firing a 9-iron to within 3 feet for a birdie and a 68 to keep his one-shot lead at Kasumigaseki Country Club.

Hideki Matsuyama is right behind Schauffele after the Japanese star finished a 7-under 64 in the rain-delayed second round and then posted a 67. Joining them in the final group is Paul Casey, who shot a 66 in his bid to keep the Olympic gold medal in golf with Britain.

Justin Rose won the gold in Rio de Janeiro, marking golf's return to the Olympic program after a 112-year absence. It came down to Rose and Henrik Stenson in Rio. This time, eight players were separated by three shots.

BMX rider Connor Fields was transferred from the intensive care unit at a Tokyo hospital to a high-level care wing one day after a horrific crash during the semifinals of the Olympic race left him laying motionless on the asphalt.

The 28-year-old from Las Vegas sustained a brain hemorrhage in the crash, and the Olympic neurosurgeon was on standby in case surgery was needed to relieve pressure on his brain. But the most recent CT scan showed no additional brain injury, USA Cycling said in a statement, and doctors are confident that Fields will not need surgery.

The gold medalist at the Rio de Janeiro Games, Fields also sustained a collapsed lung and broken ribs in the crash.

Nick Martinez, who left the major leagues for Japan after the 2017 season, struck out nine in five innings. Scott McGough, Edwin Jackson, Anthony Gose and David Robertson finished a five-hitter for the Americans, who struck out 14.

The United States, which beat Israel 8-1 in its opener, earned Sunday off as the Group B winner. It plays Japan on Monday night in the start of a double-elimination second stage. South Korea faces the Dominican Republic on Sunday.

Japan beat Mexico 7-4 to win Group A in the sport's first appearance at the Olympics since 2008.

Jay Cohen can be reached at https://twitter.com/jcohenap