Terri Rejimbal was the first woman to cross the Skyway 10K finish line in 2019. She shares tips for your training and race day. 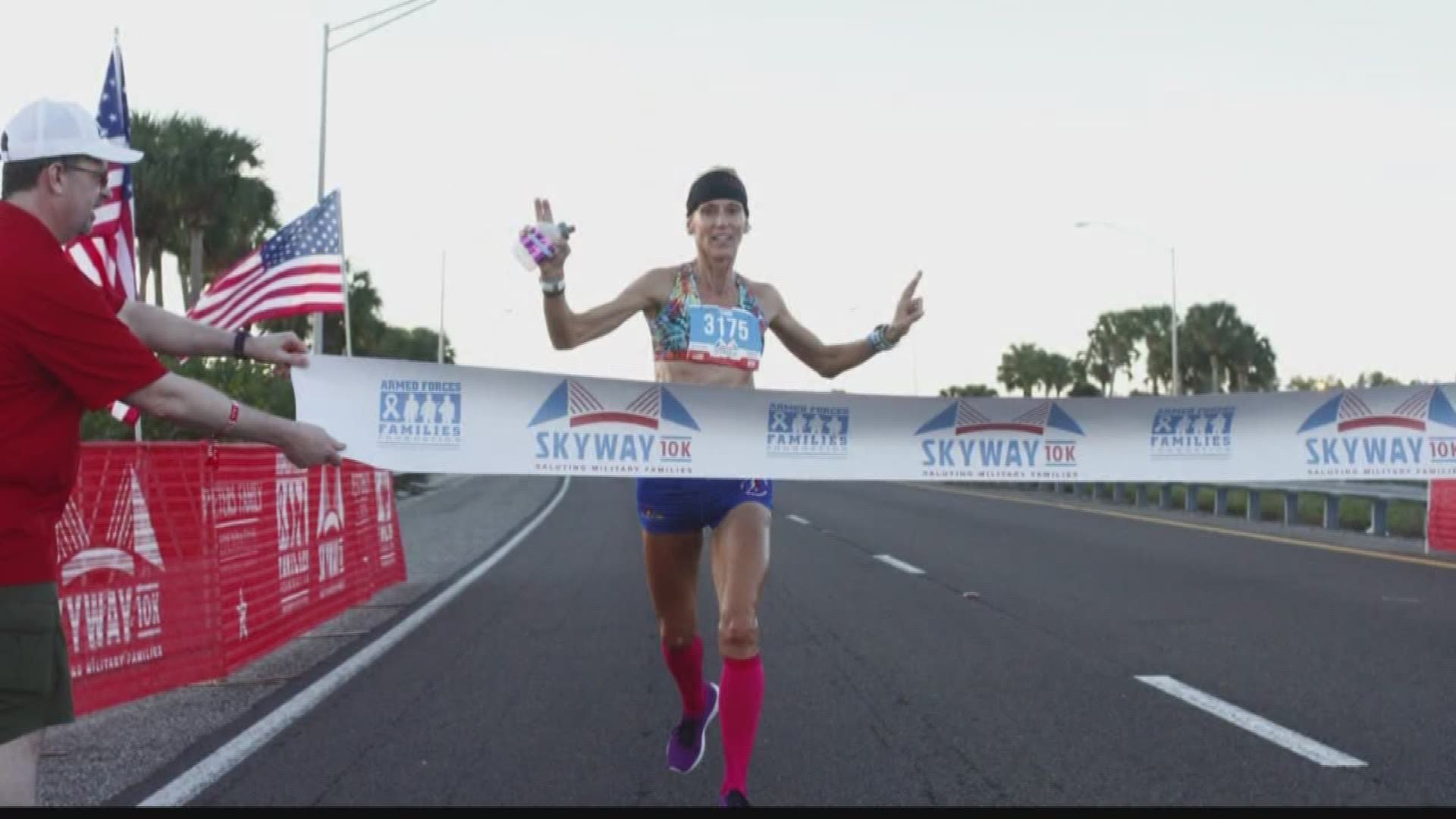 CLEARWATER, Fla. — We are 23 days away from the third annual Skyway 10K.

If you're training for the race, we're helping you get ready. 10News anchor Allison Kropff went on a run with one of the winners in the 2019 race to get you some insider information.

Terri Rejimbal was the first woman to cross the finish line last year at the Skyway 10k. Here's what it was like:

"It was really exciting actually because I really hadn't planned on being the first woman, but my competitive nature comes in and I was like, you know what? I think I'm gonna try it!" she said.

Rejimbal didn't just try it, she was crowned Queen of the Hill. That means she ran the fastest on the incline.

"I went out, I wanted to keep a pace and I thought, I can dig a little bit harder, cause I had been training on hills, so I thought, well, I'll just see what I got," Rejimbal said.

Training on hills is what she says is key to getting up that 4 percent grade of the Sunshine Skyway Bridge. So we ran the hills of the Courtney Campbell Causeway pedestrian bridge.

She gave us some tips on how to get up the incline.

Rejimbal says at least once a week in your training, run hard up some hills then walk or jog down.

What about sprinting down the incline?

"If you can handle it without going out of control," she said. "Use some of the gravity to your advantage when going down. Make sure you don't lean back so where your heels are landing and you feel like you're breaking or jarring."

You've heard "running is 90 percent mental and the rest is physical?"
Rejimbal also uses a saying from the "Hamilton" soundtrack to stay motivated.

"I'm not going to throw away my shot. That's my thing," she said. "It's that you've trained all this for it, don't just give it away, don't just go, oh I'm going to scale back a little bit. Really charge up that hill, see what you've got, you may really surprise yourself."

Rejimbal has been running competitively for 25 years, so she knows her stuff. She's a certified RRCA (Road Runners Club of America) Coach and has been running more than 25-years locally, nationally & internationally.

She's a three-time winner of Gasparilla half marathon and the oldest person to ever win an overall in the Gasparilla Distance Classic Events. She just set her marathon personal record in 2:56:44 (2019) at the Revel Kulia Hawaii marathon the week after last year's Skyway 10K.

Be familiar with the course and elevation profile: Knowing the course, turns and terrain provides an opportunity to employ race tactics and identify points where to push the pace.

Tip: If you’re racing in another city, attempt to drive the course, even a portion of it, the day before so you know what to expect. If you’re running a local race, run the course during your training.

Whether or not you’re running locally, run your pre-race warm-up on the final mile of the course. Having visual landmarks helps to mentally prepare you and to gain confidence heading to the finish. Often times, runners lose focus and their ambition to push at the end of a race. It’s been my experience that by warming up on the last mile, it’s helped me to see just how close I am to crossing the finish line.

Tip: From studying the course and elevation, try to find a route in your area that simulates the course in elevation and terrain. Practicing on similar conditions can help you be prepared for race day.

Tip: Line up properly at the start so you don’t spend time and energy weaving around slower runners. If the start of your race is narrow or crowded, you may have to run an initial surge to avoid “traffic” or a bottleneck. Remember to dial the pace back, so you don’t fatigue too early. I prefer to be on either the left or right side instead of the middle because the crowd usually converges to the centerline.

Conquer the hills. Runners often try to charge up a hill in attempts to overtake a competitor on the climb. Whether you’re trying to pass a competitor or running to set a PR, this tactic can ruin your race by wasting too much energy and causing you to fatigue early.

Tip: As you ascend the hill, try to maintain the same rhythm (not pace) by shortening your stride. Keep your head up and chest out. Think parallel to the incline. Pick up rhythm as you near the top by increasing your arm swing. This helps to pull you over the top and gets you ready to use gravity for the downhill.

Tip: When running downhill, let gravity and increased rhythm help you. Have a slight forward lean. Don’t lean backward, thus landing on your heels as it will cause you to brake. Lengthen your stride slightly but don’t overstride. If it’s too long, you’ll lose control and quads will take a beating.

Tip: When planning to pass a competitor, save your speed for the last third of the climb and strategically make your move on the downhill. You will get an oxygen boost and momentum as you crest over the top. Relax your legs as much as possible and zoom by them as if they are standing still.

Challenge yourself - don’t settle for average – I just want to finish. I’m not competitive. I just do it for fun. If you’re going to invest time in training and, at times, even sacrifice your social life, you owe it to yourself to see what you are capable of. Life is too short to do things halfway or average.

Tip: During your next race, find runners who run your pace, or just a bit quicker, and focus on staying competitive with them. Another option is to remain within eyeshot of a competitor that’s ahead and try to close the gap in the last quarter of the race. A good trick is to look at whoever is in front of you and think about racing the runner in front of them.

Don’t zone out. Stay present and alert. Once your race begins, attempt to stay mentally in the current mile and not think too far ahead. It’s easy to get overwhelmed thinking, “I still have 23 miles to go!”

Tip: “The zone” is a present state and you want to be in the zone as much as possible. One of the best ways to accomplish this is by focusing your attention inward. Think about what you are doing -- pay attention to your breathing, form and rhythm.

Tip: Set small goals throughout the race. It can be as simple as catching a runner ahead of you or running to a landmark in the distance. Once you reach your goal, set another. Continue to do this until you finish. Reduce your anxiety by staying more in the moment than focusing on the remaining distance. Keep wondering thoughts to a minimum.

Tip: When you start to feel tired or begin to zone out, throw in a small surge. A trick I use to help pick up my cadence is to count from 1 to 100, then backward if I still need more of a pickup.