In recent years, the event has raised more than a million dollars for the Armed Forces Families Foundation. 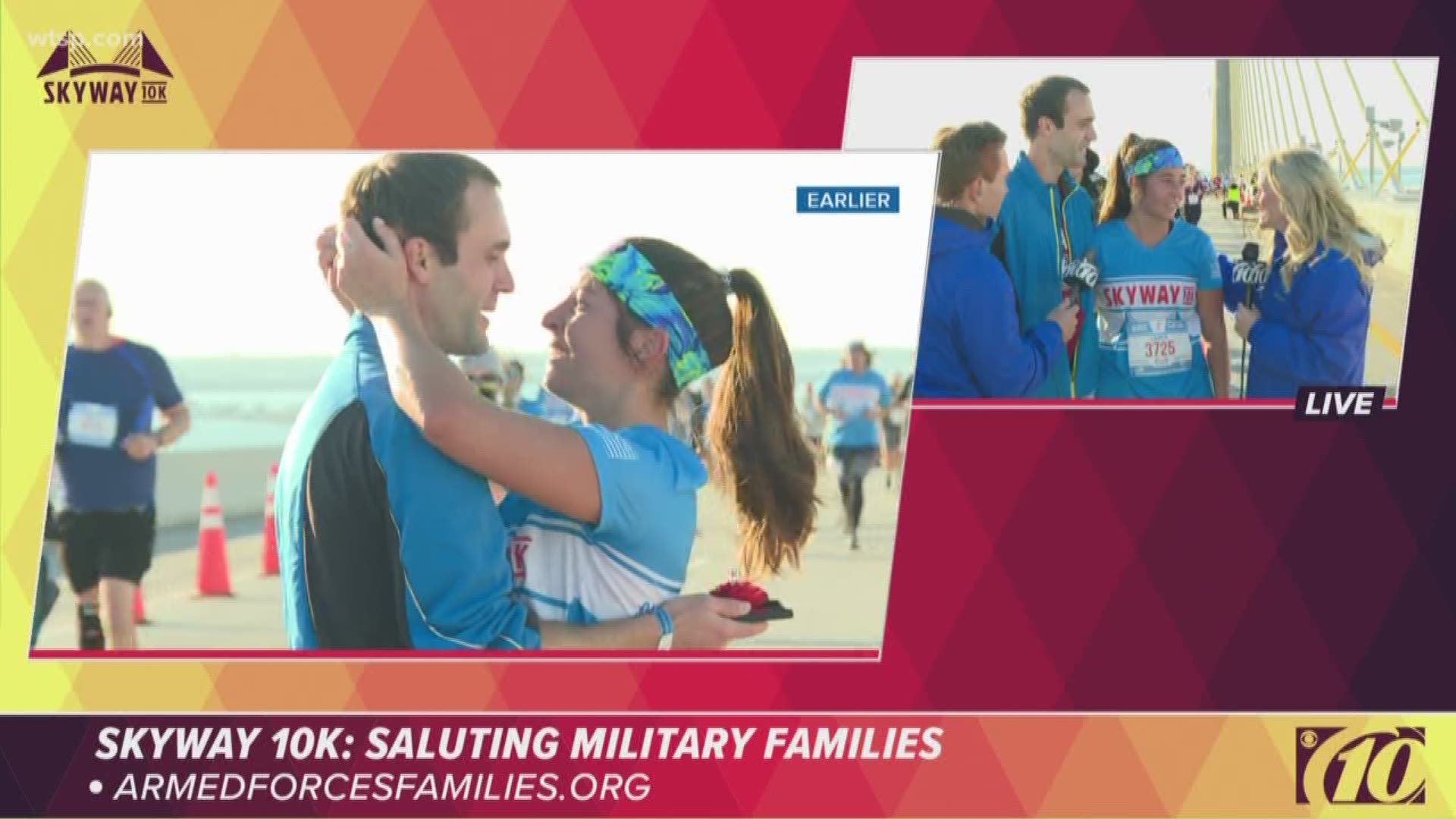 ST. PETERSBURG, Fla. — They're up at the crack of dawn, protecting the United States and everything the nation holds dear. Every day, military service members risk their lives for their fellow Americans.

Today, runners gave something back.

As the sun rose over Tampa Bay, roughly 8,000 people gathered at Tropicana Field to board buses to the Manatee County side of the iconic Sunshine Skyway Bridge.

Their goal? Complete the third annual Skyway 10K, in support of the Armed Forces Families Foundation. One hundred percent of the race's proceeds go to the organization, which helps relatives of service members.

In its first two years, the Skyway 10K raised more than $1.2 million for the charity.

To date, the AFFF has completed more than 40 projects at military bases and touchpoints in the southeastern U.S. It has bought computer tablets for schools, built new playgrounds and pavilions and remodeled recreational centers and waiting rooms.

Runners faced chilly temperatures along the 6.2-mile race route -- at least by Florida standards. People of all abilities made their way across the cable-stayed bridge, over the water of Hillsborough County and to the finish line in Pinellas County.

The descent was a welcome reprieve from the climb to the summit. The slopes on either side of the bridge's main span have a 4 percent grade. At the center of the main span, participants were more than 200 feet up.

RELATED: Here's how you can see the results of the Skyway 10K

The participants were determined.

Jeff Dawson was shot during deployment on July 20, 2019, in Afghanistan.

A round pierced his right shoulder and brought the strong, 6-foot-2, 240-pound man to the ground in a hurry -- as it embedded in his left shoulder blade. Dawson was flown to Germany for surgery and was transported back to the United States to recover. He spent three and a half weeks in Bethesda, Maryland, at Walter Reed National Military Medical Center before coming to Tampa in September.

On Sunday, he completed the Skyway 10K.

RELATED: Soldier vows to cross Skyway less than a year after being shot during deployment

When 10News broadcast the 2019 Skyway 10K, there were two wedding proposals at the top of the bridge.

Mark Adams and Giovanna Varela were first. Giovanna was so surprised when he first pulled her to the side, she told him they had to follow the rules and continue running. But then he got down on one knee, and she said yes. This year, they volunteered at the start line.

Tim Rankin and Sara Drummond were the second couple to get married in 2019. They ran again this year. They are still preparing for their wedding on March 28 at Armature Works.

This year, audiences were treated to yet another proposal. Laurian Gregor proposed to his girlfriend Lauren Doyle, who said "yes."

"I was visiting our mutual best friend, and I was introduced to Lauren at a tailgate, however, she was in a relationship at the time," Laurian told 10News. "We became best friends over the next few years and eventually both settled in St. Petersburg and have been dating ever since.”

> Click here to see results from the Skyway 10K.