According to Sports Illustrated, the network is attempting to convince at least one of the remaining eight schools to leave. 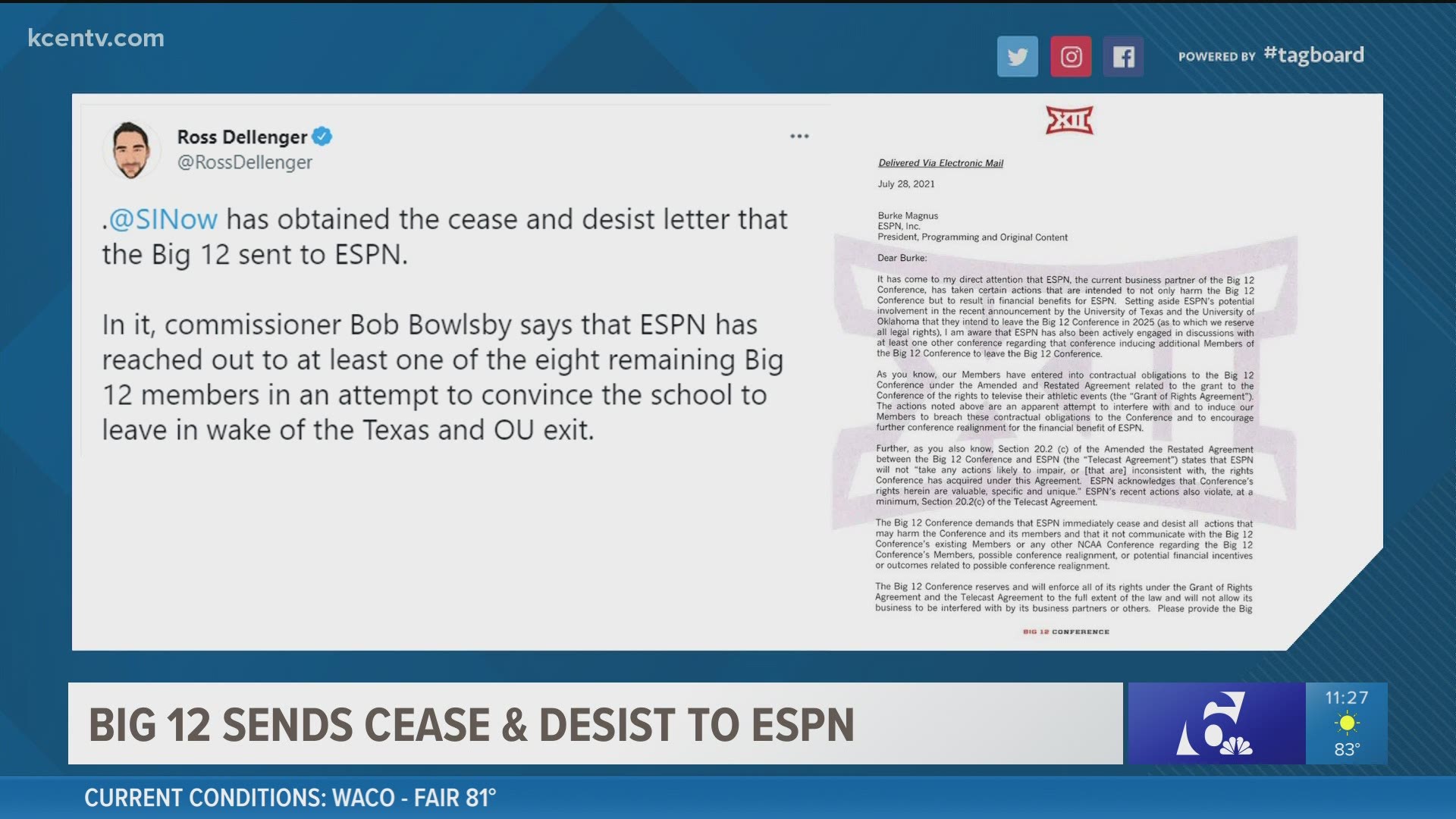 IRVING, Texas — The latest domino to fall in the conference's realignment saga, the Big 12 has reportedly sent a cease and desist letter to one of its broadcast partners.

.@SINow has obtained the cease and desist letter that the Big 12 sent to ESPN.

In it, commissioner Bob Bowlsby says that ESPN has reached out to at least one of the eight remaining Big 12 members in an attempt to convince the school to leave in wake of the Texas and OU exit. pic.twitter.com/j50gEBPWBY

In the letter, Big 12 commissioner Bob Bowlsby writes, "Section 20.2 (c) of the Amended the Restated Agreement between the Big 12 Conference and ESPN (the "Telecast Agreement") states that ESPN will not 'take any actions likely to impair, or [that are] inconsistent with, the rights the Conference has acquired under this Agreement.'"

The University of Texas at Austin and the University of Oklahoma both informed the conference Monday they will not renew their agreements upon expiration and then petitioned the SEC for a membership invitation the next day.

Bowlsby's letter to ESPN demands the network not reach out to any of the remaining schools in the conference.

According to Brett McMurphy of Stadium, ESPN issued a statement in response to the letter, "The claims in the letter have no merit."

Wednesday, Jason Whitely at 6 News' sister station WFAA in Dallas reported the 14 SEC presidents will vote in a meeting Thursday on whether to invite Texas and Oklahoma in to the league, just eight days after the Houston Chronicle first broke the news as Texas A&M coach Jimbo Fisher was approaching the podium for his press conference at SEC Media Days.

#BREAKING: The presidents from the 14 universities of the @SEC will vote *tomorrow* on whether to allow @TexasLonghorns and @UofOklahoma to join. This is now moving at a rapid pace.

Six of the eight remaining schools in the Big 12 (Baylor, Texas Tech, Oklahoma State, Kansas State, Kansas and Iowa State) have been in the conference since it first started playing in 1996.