The 54-year-old has always had a knack for nature, and is now one of the most successful python hunters in South Florida. 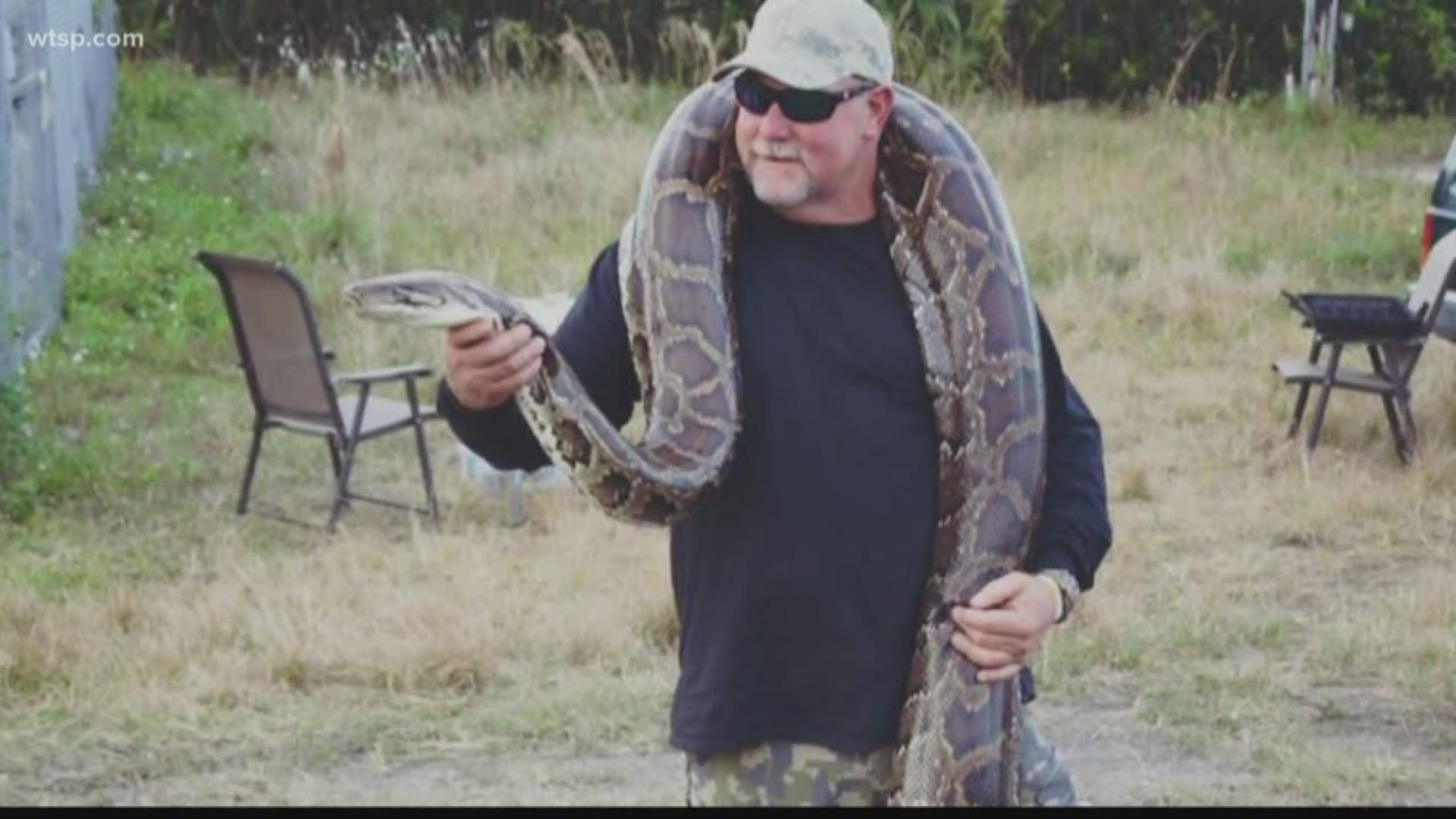 Bill Booth is about as close as you can get to Florida's version of Crocodile Dundee.

He's always combing the Everglades for cold-blood quarries like alligators and pythons.

"It's fun to come out here and make money doing what you love to do," Booth, 54, said. "I love (to) get out here and wrestle with snakes and alligators. And to get paid for it is a bonus."

Booth said he's always been a nature nut. He said his form of entertainment was "catching birds and snakes" and climbing coconut trees. But it was until a few years ago that his knack for nature turned into something much bigger.

In some cases much, much bigger.

1 / 7
AP
Bill Booth of Bradenton, Fla. wears a dead Burmese python he caught around his neck as he poses for photos, Saturday, Jan. 19, 2013 in the Florida Everglades as part of the monthlong "Python Challenge." Booth's snake measured an unofficial 11.59 feet (353.5 cm) Wildlife officials say more than 1,000 people signed up for the competition that began Jan. 12 and ends Feb. 10. The state hopes the hunters will help researchers collect more information about the pythons. The large snakes are an invasive species and are considered a menace to Florida's swamplands. (AP Photo/Wilfredo Lee)

In 2013, Booth a couple of his friends headed to the Everglades and won second place in Florida's Python Challenge. The state-sponsored snake hunt saw about 1,600 people descend into the South Florida swamps to hunt the elusive serpents.

A couple of years later, Booth and his "Python Posse" did it again. This time, they won the whole thing.

Since then, Booth -- who spent 20 years as a firefighter -- parlayed his python prowess into a second career.

His photos and videos of his animal wrangling adventures have gone viral on social media around the world. It's all part of his growing brand: Bill Booth Outdoors.

For Booth, the fame that came with pursuing his passion is a bonus. The hunt itself has its own rewards.

The attention has also given Booth a platform to spotlight Florida's python problem. It all started in 1992 when Hurricane Andrew hit South Florida and flattened -- among other things -- a huge python hatchery.

The snakes escaped, adapted and have been thriving ever since. These reptiles have also consumed large chunks of the region's native species. And as they grow, they move on to bigger prey like alligators and deer.

"This is our Everglades, and there is only one Everglades," Booth said. "And these pythons are coming through and just destroying the ecosystem down here."

If you think Booth must be crazy to make a career out of swimming with gators and wrestling 17-foot snakes, he said what scares him most is what other people do every day.

"I would rather be out here dancing with an alligator or kissing a python than to be sitting in traffic in Tampa," Booth said. "It's just, that's a fear to me."

There are times when Booth had some moments of reptilian regret.

"There's that split-second where you think, 'gosh, did I make a mistake grabbing this thing?'" Booth said.

He said he's encountered snakes so big, he wasn't sure how it would end.

"We're all going to die sooner or later and if it's out here and an alligator eats me, I'd rather do that than have a heart attack pulling a ladder off of a firetruck," Booth said. "It's dangerous but I'm not gonna sit at home and watch TV and wish. I'm gonna get out here and do it."

Booth said he's also started a wildlife hunting and tour business and has already had a couple of celebrity clients, including rock legend Ozzy Osborne.