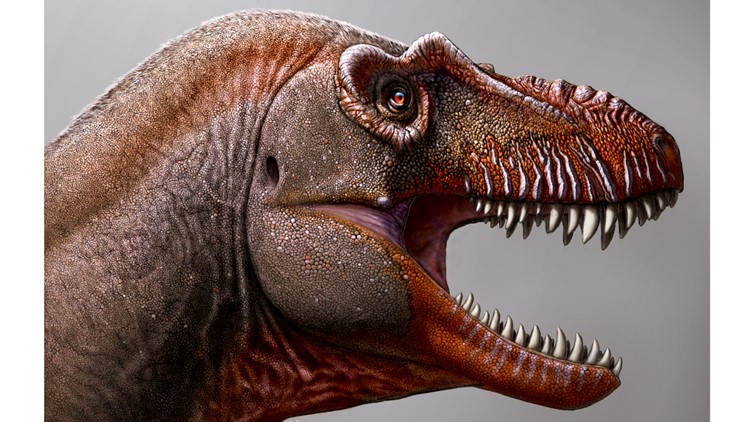 ALBERTA, Canada — Its scientific name is inspired by the Greek god of death, and paleontologists say this alludes to this dinosaur's role as an apex predator.

Scientists with the Royal Tyrrell Museum in Canada announced Monday the discovery of a new dinosaur -- a tyrannosaur species related to the famous Tyrannosaurus rex.

The Thanatotheristes degrootorum is the first new species of tyrannosaur to be discovered in Canada in 50 years and the oldest ever found in the country. And, Alberta is essentially a tyrannosaur graveyard with scientists there discovering four other species in the same meat-eating dinosaur family: Daspletosaurus, Gorgosaurus, Albertosaurus, and Tyrannosaurus.

Its name comes from Thanatos, the Greek god of death, and theristes, which means one who reaps or harvests. Thus, the nickname "Reaper of death."

The new dinosaur identification was based on bones discovered in 2008 by paleo-enthusiast couple Sandra and John De Groot. The New York Times said the two saw something in ice along the shore where the Oldman River meets the Bow River.

John jokingly said it looked like a dinosaur jaw, he told the newspaper. It was.

“The jawbone was an absolutely stunning find. We knew it was special because you could clearly see the fossilized teeth,” he said in a museum blog post.

Based on the unique features of the jaw bone, researchers concluded this fossil came from an entirely new species of tyrannosaur.

“Thanatotheristes can be distinguished from all other tyrannosaurs by numerous characteristics of the skull, but the most prominent are vertical ridges that run the length of the upper jaw,” said Jared Voris, a University of Calgary Ph.D. student, and lead author of the study.

RELATED: A foot-long dinosaur with bat-like wings has been found in China