Liftoff for the May 30 launch is expected at 3:22 p.m. EDT if the weather allows. 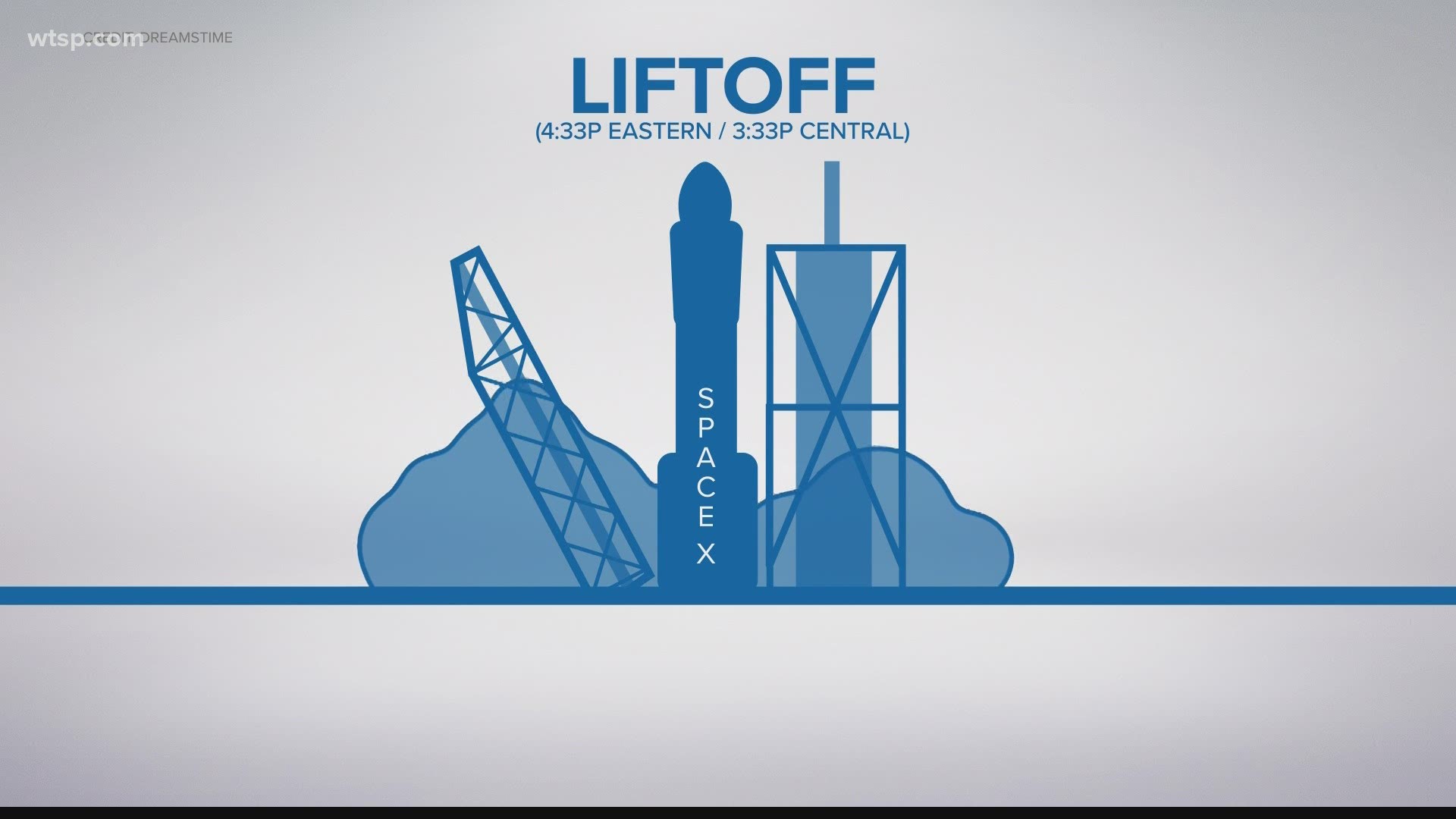 CAPE CANAVERAL, Fla. — While the coronavirus might be keeping us from witnessing the first crewed launch from the U.S. in nearly a decade in person, it can't keep us from watching in the comfort of our homes.

NASA has launched an immersive virtual experience so space fans can still witness all the excitement up close on May 30. SpaceX's Elon Musk said earlier Saturday morning that the launch countdown will proceed at the Kennedy Space Center. There is about a 50-50 chance of good weather for launch.

So, grab your best space gear, your snacks, streaming device and set up your own watch party, because NASA is inviting you to "Be Our Guest."

For a full day of experiences, you'll first want to register for the "Launch America" social event. This will keep you in the know for the day of events, opportunities and how to stream the launch. NASA will communicate with you via email, so be sure to keep an eye on your inbox.

By registering you'll get the chance to interact with NASA Administrator Jim Bridenstine and Kennedy Space Center Director Robert Cabana and ask them questions ahead of the launch.

Space fans can also, take a virtual tour of the launch pad, climb into a mock-up of the Crew Dragon capsule, practice docking to the ISS, train to be an astronaut and print out a mission patch.

If you want a more straight-forward experience on launch day, be sure to subscribe to NASA TV on YouTube. A list of daily streams can be found here.

You'll also want to make sure you follow NASA on social media as live coverage will be across all platforms and use the hashtag #LaunchAmerica to keep up with the latest and possibly even be featured.

“Through NASA’s virtual launch experience, we make it possible for more people than ever to watch the beginning of this new era in human spaceflight,” said Bettina Inclán, NASA’s associate administrator for communications. “We’re already seeing people participate online with the #LaunchAmerica hashtag and helping build the excitement for this historic moment.”

This will be the first crewed launch of astronauts from the U.S. since the end of the Space Shuttle era in 2011. Since then, NASA has relied on the Russian space program for missions to the ISS.

Astronauts Bob Behnken and Doug Hurley will board a SpaceX Crew Dragon spacecraft launched atop a Falcon 9 rocket from the Kennedy Space Center’s historic Launch Complex 39A as a part of the Demo-2 mission.

Once at the ISS, the pair will stay and work for approximately one to four months before returning to Earth.

Liftoff for the May 30 launch is expected around 3:22 p.m. EDT if the weather allows.

The Kennedy Space Center sharing weather is currently 50-percent "go" for launch day with the chance of showers and storms possibly pumping the brakes.

"On launch day, continued extensive cloudiness is expected with rain showers and isolated thunderstorms expected throughout the day. The primary weather concerns are flight through precipitation, the thick cloud layer rule, and cumulus cloud rule," according to the 45th Weather Squadron.

NASA and SpaceX are still pushing forward as Behnken and Hurley completed a dress rehearsal Saturday after being given the green light earlier this week.

The Demo-2 mission will be the final major step before the Crew Dragon can be certified for operation and long-duration missions to the International Space Station by NASA's Comercial Crew Program. The certification means continued research and technology investigations which will lay the groundwork for future exploration of the Moon and Mars, according to NASA.