Touchdown! Mars 2020 Perseverance rover has landed on the red planet 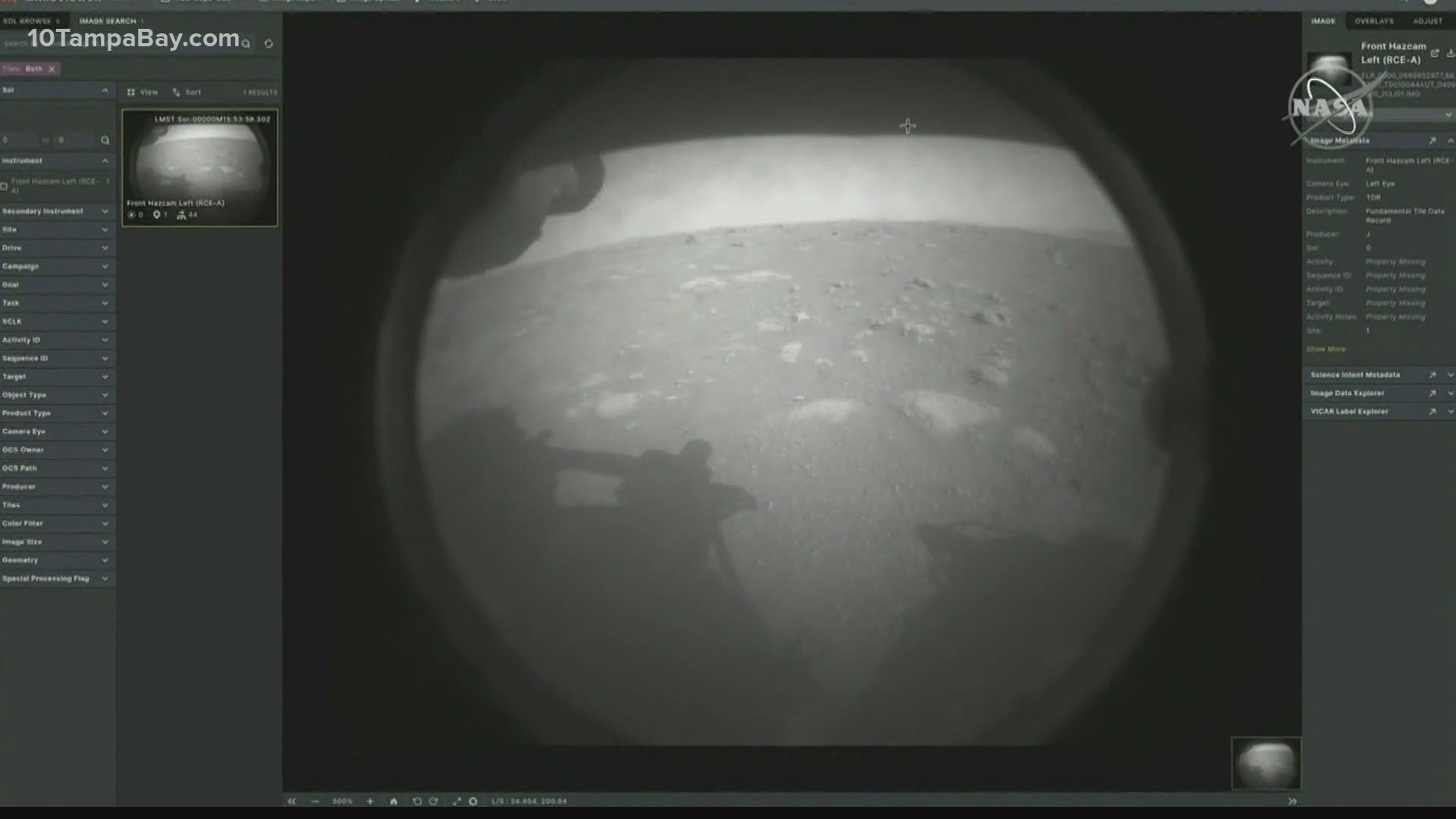 4:01 p.m.: We have our first look at the surface of Mars as Perseverance has safely completed its nearly seven-month journey.

3:58 p.m.: Perseverance is confirmed as being "alive" on the Red Planet. It landed at the Jezero Crater.

I’m safe on Mars. Perseverance will get you anywhere.

3:56 p.m.: Perseverance has touched down on Mars! The rover will now explore for signs of past life on the red planet.

Touchdown confirmed. The #CountdownToMars is complete, but the mission is just beginning. pic.twitter.com/UvOyXQhhN9

3:53 p.m.: Perseverance parachute has deployed to help control its descent to Mars. The spacecraft is now traveling at subsonic speeds.

Here goes! Lighting the engines on my “jetpack” for final descent. Wheels down in less than a minute.#CountdownToMars pic.twitter.com/AQKPEBGr0o

3:48 p.m.: The rover is about 118 miles from Mars' surface and has begun its entry interface. Now begins the "7 minutes of terror" until touchdown.

This is it. I’m entering the top of the Mars atmosphere. No looking back. Seven minutes to touchdown. #CountdownToMars pic.twitter.com/q4LcKcPfpr

3:40 p.m.: Crew-stage separation is complete. The landing crew is operating based on "heartbeat tones" coming from the rover at this time. Next comes the awakening of Perseverance's entry interface.

The hardware that got me to Mars has done its job, so it’s bye-bye to the cruise stage. #CountdownToMars pic.twitter.com/CXcxm1GHzj

3:34 p.m.: Landing team reports we are about 14 minutes from entry and are powering off the crew-stage devices.

"I love that this whole experience sparked a greater interest in the mission."

Vaneeza Rupani, the student who named the Ingenuity Mars Helicopter that is traveling with @NASAPersevere, explains her community's excitement for the #CountdownToMars: pic.twitter.com/PcInOzmeG6

"Watching the launch invoked that sense of inspiration, mixed with anticipation — along with that rumble in my chest."

Alex Mather, the student who named our rover @NASAPersevere, explains how it felt to watch the launch in person when it began its #CountdownToMars: pic.twitter.com/WKiTPOM8Zv

3:20 p.m.: Entry, Descent and Landing Lead Al Chen delivers a message to his team as they countdown to Mars.

"It hasn't been easy. I don't think we've even all been in the same room at the same time... Thanks for literally and figuratively putting us in the right position to succeed. Let's land on Mars together."

"We're trying to land the biggest, heaviest, and most complex rover we've ever built at the most dangerous landing site we've ever attempted."

"We're trying to land the biggest, heaviest, and most complex rover we've ever built at the most dangerous landing site we've ever attempted." @NASAJPL Entry, Descent, and Landing Lead Al Chen explains the difficulty @NASAPersevere faces on her #CountdownToMars: pic.twitter.com/FOt3tkDGpR

3:00 p.m.: Perseverance is officially operating on its own. The call to the spacecraft went out earlier this afternoon, but communication takes time to travel through space. Officials say each message sent takes roughly 11 minutes to arrive at its desired location.

"We're looking for [signs of] ancient life... and that's what we're so excited about." @Dr_ThomasZ, Associate Administrator for the Science Mission Directorate, explains one of the main goals of @NASAPersevere. #CountdownToMars pic.twitter.com/Jnpw0h8kFy

"Studying the possible emergence of life on ancient Mars can also help us better understand the conditions that led to life on our own planet."

Deputy project scientist Katie Stack Morgan breaks down why we are sending @NASAPersevere on her #CountdownToMars: pic.twitter.com/9eKbY9QbS4

2:28 p.m.: Perseverance has been told to begin operating on its own as it approaches Mars. The call to turn off the spacecraft's transmitter was cleared and now those in mission control will take their hands off the wheel.

"Turning off the transmitter is like taking your hands off of the wheel."

From this point forward, @NASAPersevere is on her own to execute the entry, descent, and landing to the Martian surface. The #CountdownToMars continues: pic.twitter.com/CazXu33H2U

"@NASAPersevere is still in space right now, about 9,000 miles from Mars. So far, she is healthy and on course."

12:00 p.m.: Here's a quick simulation of what's to come as Perseverance looks to make the agency's most difficult touchdown.

A preview of what’s to come in just a couple of hours. Once I get this part behind me, I’ll finally be able to get to work. Can’t wait. #CountdownToMars pic.twitter.com/KDrOzNFats

11:00 a.m.: The Mars spacecraft's nearly seven-month journey all comes down to the mission's most critical moment as it prepares for entry, descent and landing.

10:46 a.m.: Perseverance will be carrying the names of 10.9 million Earthlings stenciled on the rover's plate as it lands on Mars.

📣 Roll Call: Who is riding along on the fantastic voyage to Mars with @NASAPersevere? Reply with your #CountdownToMars boarding pass! pic.twitter.com/JgoOL1dLc6

The latest Mars rover is set to land on the red planet after blasting off from Launch Complex 41 at Cape Canaveral Space Force Station in Florida last July.

After a nearly seven-month journey, the Mars 2020 Perseverance rover mission is about to come to its most critical point.

The rover, named by a seventh-grader from Virginia, will plunge through the thin Martian atmosphere at more than 12,000 mph come Feb. 18. According to NASA, a parachute and powered descent will slow the rover down to about two mph before it touches the planet's surface.

“If there’s one thing we know, it’s that landing on Mars is never easy,” said NASA Associate Administrator for Communications Marc Etkind.

And its successful touchdown is crucial to further exploration and data collection needed for future human missions to Mars and the Moon.

So, what's aboard the rover? And what's its purpose on Mars?

Perseverance will carry a new suite of instruments to help search for signs of past life on Mars, technology meant to see about the sustainability of human life and a collection of microphones and cameras.

Also along for the ride is the Ingenuity Mars Helicopter that will "attempt the first powered, controlled flight on another planet," according to NASA.

While more than 100 million miles away, Perseverance will look to collect data about Mars' geology and climate while roaming the planet's terrain. NASA also intends to have the rover stash rock samples for a future rover to return to Earth by 2031 at the earliest.

Space lovers will be able to experience what it is like to land on the red planet in high-definition on Feb. 18. You can thank the spacecraft's microphones and 19 cameras for the up close and personal look.

The 10.9 million Earthlings who submitted their names to be stenciled on the rover's plate will get to explore Mars with Perservence in spirit.

Live coverage from NASA's Jet Propulsion Laboratory in Southern California starts at 2:15 p.m. You can catch all the action on NASA TV. Or tune in to 10 Tampa Bay's Twitter, Facebook and YouTube where we will be streaming the mission live.

As we #CountdownToMars for @NASAPersevere's landing, learn about operating a rover 100 million miles away, and making sure it gets to where the science team wants to go.@MarsCuriosity driver Sophia Mitchell explains in the latest #GravityAssist podcast: https://t.co/YfMc2cUPwB pic.twitter.com/CfjP7yDZ8Z