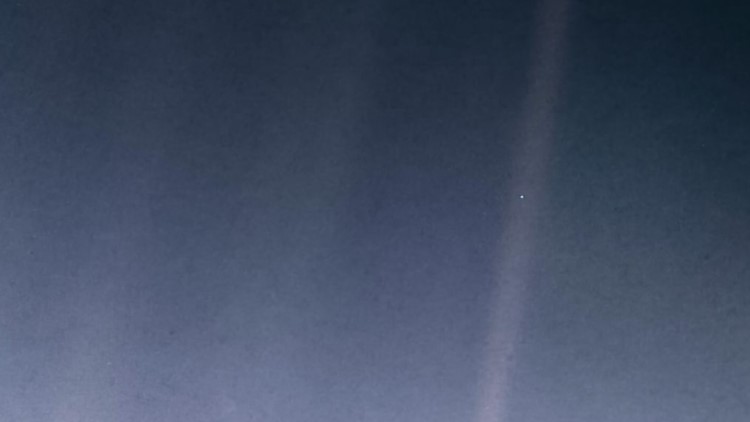 See that tiny speck in the vastness of space? Lean in closer.

All of that encompassed in a refreshed image of the iconic "Pale Blue Dot."

For its 30th anniversary, NASA's Jet Propulsion Laboratory published a new version of the image captured on Feb. 14, 1990, by the Voyager 1 spacecraft. NASA it used update image-processing software while also "respecting the intent of those who planned the image."

The new image is mostly a gradient texture of dark and light gray-blue -- the vastness of space. You can also see rays of sunlight scattered within the view stretching across the scene.

One of those rays intersects with Earth -- a tiny pale speck towards the right. The image shows our planet 3.8 billion miles away.

NASA said Earth occupied less than a single pixel in the image and is not fully resolved.

The "Pale Blue Dot" moniker originated by astronomer and astrophysicist Carl Sagan, who proposed the idea of using Voyager's cameras to capture an image of Earth from so far away.

Sagan wrote a book titled "Pale Blue Dot" after being inspired by the image.

Below is the original "Pale Blue Dot" image.

This narrow-angle color image of the Earth, dubbed 'Pale Blue Dot', is a part of the first ever 'portrait' of the solar system taken by NASA?s Voyager 1. Feb. 14, 1990. NASA/JPL
NASA/JPL