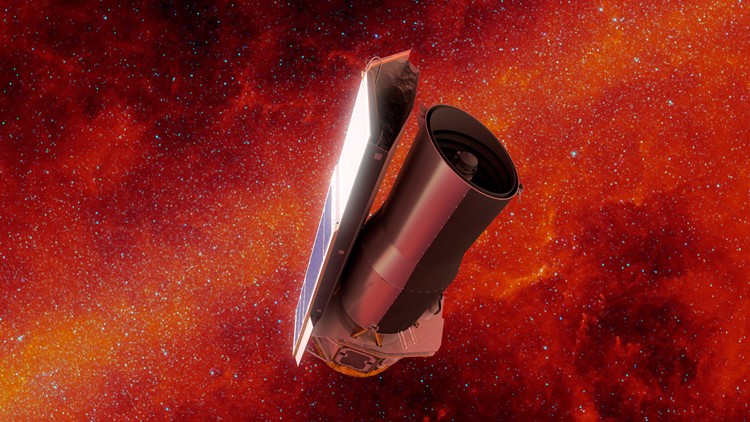 As NASA retires Spitzer telescope, a look back at some of its most incredible cosmic images

Its mission was only supposed to last two and a half years, but more than 16 years after launch, NASA's Spitzer telescope has shown us cosmic objects almost to the edge of the universe.

Launched in 2003, Spitzer will be shut down Jan. 30 and join the great spacecraft graveyard in the sky. It was named in honor of the late astrophysicist Lyman Spitzer Jr., who first proposed putting telescopes in space in 1946.

For the last 16 and a half years, Spitzer has been in an orbit trailing Earth around the sun, but getting farther from our planet every day. It's not more than 160 million miles from Earth.

Looking back at Spitzer's time beaming back images of objects beyond our view, here are some of its most incredible discoveries:

Putting a new ring on Saturn

This artist's conception shows a nearly invisible ring around Saturn -- the largest of the giant planet's many rings. It was discovered by NASA's Spitzer Space Telescope.
NASA

Saturn has many rings but in 2009 Spitzer showed scientists a faint, infrared glow of a much large ring around the planet. At 40 times as thick as Saturn and more than 200 times as wide, the ring of dust and debris is the planet's largest.

According to research published in the journal Nature, space particles hitting the moon Phoebe appear to be causing the massive ring to be filled with dust and debris.

Three of the TRAPPIST-1 planets dwell in their star's so-called 'habitable zone,' shown in green. This is the band around the star where temperatures are just right, not too hot, not too cold, for liquid water to pool on the surface of an Earth-like world
NASA

In 2017, astronomers announced that Spitzer data and data from telescopes on Earth confirmed that seven Earth-sized planets orbit a dim red star. That star, named TRAPPIST-1 is just 40 light-years away.

And, scientists say those seven planets have conditions that make it possible for liquid water on the surface.

The giant star Zeta Ophiuchi, a young, large and hot star located around 370 light-years away, is having a 'shocking' effect on the surrounding dust clouds in this infrared image from NASA's Spitzer Space Telescope.
NASA

As giant star Zeta Ophiuchi speeds through space, it makes glowing waves called bow shock. Scientists at NASA's Jet Propulsion Lab say this star might have once been sitting next to a companion star, but when that star died in a fiery explosion, Zeta Ophiuchi was sent flying.

Spitzer snapped a series of images in 2012 to create this composite of Zeta Ophiuchi, a star 20 times more massive and 80,000 times bright than our Sun. It's also shooting around space at about 54,000 miles per hour.

This view of the Sunflower galaxy highlights a variety of infrared wavelengths captured by NASA's Spitzer Space Telescope.
NASA/JPL-Caltech

The Sunflower galaxy was discovered in 1779 by French astronomer Pierre Méchain, but in 2011 Spitzer highlighted the galaxy's numerous infrared wavelengths. The Sunflower galaxy, also known as Messier 63, is about 27 million light-years from Earth in the constellation Canes Venatici.

NASA's Spitzer Space Telescope set its infrared eyes on one of the most famous objects in the sky, Messier 104, also called the Sombrero galaxy.
NASA/JPL-Caltech

Messier 104, also called the Sombrero galaxy, is one of the most famous objects in our night sky. It was discovered in 1781, also by Méchain. In the center of this galaxy is a huge black hole, believed to be a billion times more massive than the Sun.

Andromeda, named Messier 31, is more than two million light-years away and is our nearest major galactic neighbor. Spitzer snapped this infrared view of the galaxy in 2005.

The Cat's Paw Nebula is a star-forming region inside our galaxy. It's in the constellation Scorpius and is about 4,200-5,500 light-years away from Earth. Data imaging from Spitzer shows a bright, cloudlike band across the image, which shows the presence of gas and dust that can birth new stars.

The Tarantula Nebula was one of the first objects Spitzer studied when it launched in 2003, and it was one of the last it imaged before it shut down Jan. 30, 2020.

NASA astronomers say the Tarantula Nebula is a "hotbed for star formation." The nebula is located in the Large Magellanic Cloud, a dwarf galaxy bound by gravity to our own Milky Way.

This mosaic reveals a panorama of the Milky Way from NASA's Spitzer Space Telescope. This picture covers only about three percent of the sky, but includes more than half of the galaxy's stars and the majority of its star formation activity.
NASA/JPL-Caltech

To create these maps our home galaxy, astronomers used more than 444,000 frames from the Spitzer telescope. The charts show the "raging star-formation" happening in the inner Milky Way. While blue stars are relatively close to Earth, red areas show dusty regions for star formation.

According to ScienceNews.org, the mapping project required more than 4,000 hours of telescope time over 10 years.