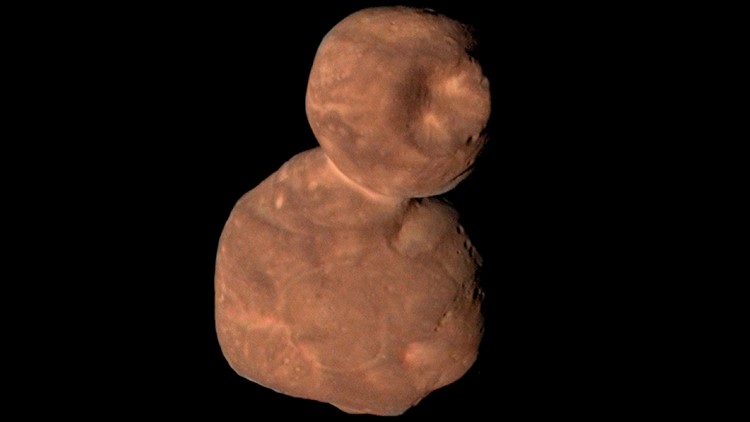 Photo by: AP
This Jan. 1, 2019 image from NASA shows Arrokoth, the farthest, most primitive object in the Solar System ever to be visited by a spacecraft. Astronomers reported Thursday, Feb. 13, 2020 that this pristine, primordial cosmic body photographed by the New Horizons probe is relatively smooth with far fewer craters than expected. It's also entirely ultrared, or highly reflective, which is commonplace in the faraway Twilight Zone of our solar system known as the the Kuiper Belt. (NASA/Johns Hopkins University Applied Physics Laboratory/Southwest Research Institute/Roman Tkachenko via AP)

NASA's space snowman is revealing fresh secrets from its home far beyond Pluto.

More than a year after its close encounter with the snowman-shaped object, Arrokoth, the New Horizons spacecraft is still sending back observations from more than 4 billion miles away.

Astronomers reported Thursday that this cosmic body is relatively smooth with far fewer craters than expected. It's also ultra red, or highly reflective, which is commonplace in the faraway Twilight Zone of our solar system known as the Kuiper Belt. While methane is present, no water has yet been found.

It's the most distant object ever explored.