This week, Grant McOmie shows us the dawn fly-out of the largest gathering of bald eagles in America. 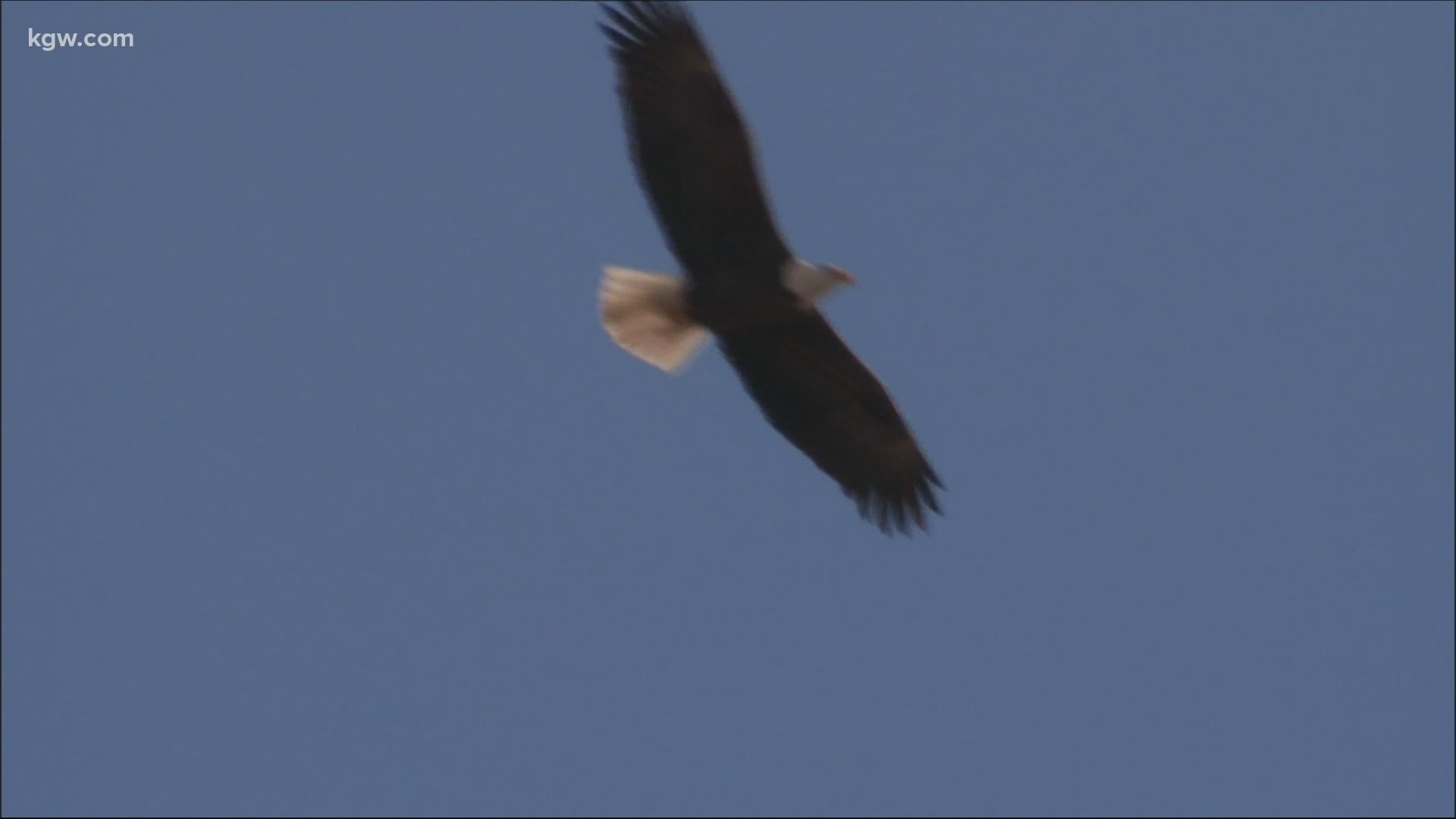 Stillness at daybreak accompanies the arctic air that plummets the early morning temperatures to sub-freezing.

It’s a lonely time as the only headlamps for miles--ours--pierce the darkness on a back road in Oregon’s Klamath Basin.

Despite the bone-chilling cold, wildlife expert Dave Hewitt tells me that there is no better time to tally the dawn fly-out of the largest gathering of bald eagles in America.

We have come to Bear Valley Wildlife Refuge (part of the Klamath Basin National Wildlife Refuges Complex), a large forest of old-growth timber that provides the eagles with protection from the wind and cold. It is the staging area for the eagles’ daily fly-out as the birds take wing and search for food.

“There’s one,” said Hewitt. “Right over your head, Grant! It’s coming right over the road.”

Hewitt said there is no better time to tally the dawn fly-out of bald eagles.

“Yeah, it’s fantastic!” Hewitt enthusiastically whispered. “As the sun is coming up, just starting to get light, you can see 40, 50, 60 eagles get up, swoop and soar and glide right over the top of you. It’s pretty impressive to watch when you have several hundred eagles and you just can’t count fast enough."

I could not keep up with the fly-out: 20, 30, 40 --soon I was dazzled and dizzied by the birds appearing in front of us, then disappearing across a distant ridgeline. I simply could not keep track of them all.

Finally, I gave up my count and enjoyed the show with the small group of birders who had joined us. We gazed across to the eastern horizon, toward a soft shade of rose that marked the approaching sunrise.

Diana Samuels eagerly agreed and added, “It’s just great to come out here early and watch them as they go out to feed at the refuge.”

Over 1,000 eagles arrive at Klamath Basin each winter from Canada and Alaska, following their food supply of ducks, geese and other birds.

Despite the frigid conditions during much of the winter, large bodies of water such as Upper Klamath Lake often remain unfrozen, and large flocks of ducks help prevent some of the smaller ponds from freezing over as they paddle about.

David Menke, staff member at the U.S. Fish and Wildlife’s Klamath Refuge headquarters, guided us across miles of intersecting roadways that checkerboard the Lower Klamath Refuge.

Menke suddenly stopped, brought his binoculars up and gazed across an otherwise flat, drab-brown grain field (wheat harvest had occurred months earlier) with scores of black dots with white heads on the distant horizon.

“Is this a buffet table for the eagles,” I asked with a chuckle.

“Absolutely! A real smorgasbord – and this field – I guarantee you – will not be this way a week from now – the birds will be another field," Menke said. "You see, they are hunting field mice and other rodents. It’s really something to sit and watch the birds hunt here.”

Menke said there are many awesome sights to see across nearly 170,000 acres of both state and federal wildlife refuges in the Klamath Basin.

Multiple auto tour routes make the travel easy, so be sure to stop in at the Klamath Refuge Headquarters where free maps and brochures will set you on the right trail to enjoy the show.

While each season offers some new species to see, Menke added that winter is the best time to see the most raptors, including the largest concentrations of eagles.

“We may get a period when it freezes in December and then we might get open water in January and February and the eagles – respond accordingly," Menke said.

"They’ll stand on the ice and feed on waterfowl. Eagles on telephone poles, eagles on irrigation equipment, eagles on farm fields – mostly they just stand around a lot, so there’s endless opportunities to observe wildlife," he said.

Visitors to Klamath Wildlife Refuge or those who wish to explore the Klamath Birding Trail will experience a wonderful educational opportunity.