A spokesperson said "essentially" all of its Spirit flights were canceled on Monday. 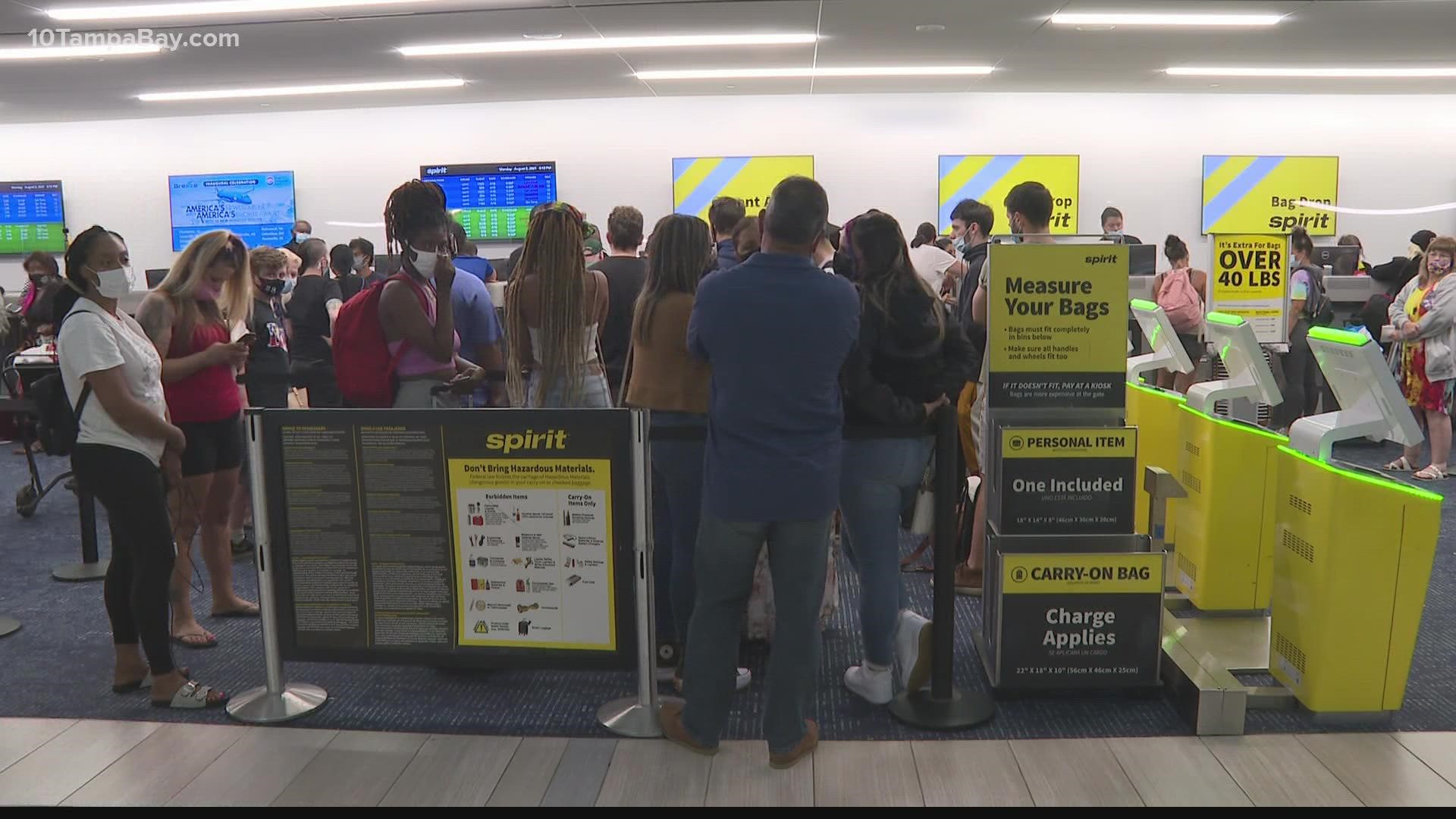 TAMPA, Fla. — Spirit Airlines customers at Tampa International Airport are among those looking for answers after the company canceled hundreds of flights.

According to an airport spokesperson, a total of 20 inbound and outbound flights were canceled Monday. "That is essentially all of our Spirit flights," they added.

While it's unclear how many, TPA said guests lined up at the airline's ticket counter following the cancelations in an effort to get their flights rescheduled. In the meantime, the airport is advising anyone who is set to fly with Spirit to check with the company about its status.

“We got we got here about 11:45 this morning and we’ve been waiting ever since,” said Sharron Sigg late Monday as she tried to get to Kansas City.

And she wasn’t alone.

“I’ve been three hours in the line to see what they’re gonna do with me,” said a clearly agitated Zulay Martinez

Unhappy passengers first reported massive delays in cities across the country over the weekend. According to statistics from FlightAware, the Florida-based airline has delayed or canceled nearly 900 flights since Sunday.

“Nobody knows what to do,” said Andrea Caputo, who was booked on an early morning Spirit flight out of Orlando heading to a long-awaited convention in Vegas.

"It was one of the biggest accomplishments of my life going to Las Vegas,” said a disappointed Caputo. “I was supposed to be with my company walking across the stage, going to trainings and I miss the entire day.”

She says the chaos at the airport combined with the lack of communication led to some very upset passengers.

Speculation on social media led to rumors of a potential pilot's strike. In a statement, Spirit Airlines has denied such rumors.

"There is no strike," Spirit representative Field Sutton said in an email. "I’m aware of the rumor of a pilot strike, but it’s 100% false. We have a fantastic team of pilots working very hard during this busy travel season."

RELATED: US to require airlines to refund fees on baggage if delayed

In a statement to the press Monday, Spirit said the airline's issues stem from "operational challenges," but would not clarify further.

"We're working around the clock to get back on track in the wake of some travel disruptions over the weekend due to a series of weather and operational challenges," the statement reads. "We needed to make proactive cancellations to some flights across the network, but the majority of flights are still scheduled as planned."

Orlando International Airport was also feeling the impacts of cancelations with WKMG-TV reporting hundreds of passengers lining up to speak to an airport employee about their flight. The outlet adds some travelers said they waited 12 hours before being able to reach an employee.

We are experiencing operational challenges in some areas of our network. Before going to the airport, check your email and current flight status here: https://t.co/yuPJDPxeNu. The fastest way to receive assistance is to visit our webchat: https://t.co/QnlZcUCMtk. pic.twitter.com/E176h8KHjN