'Two parts magic, one part water': How Snowcat Ridge is making it snow in Florida

Weather is no match for science in this winter wonderland. 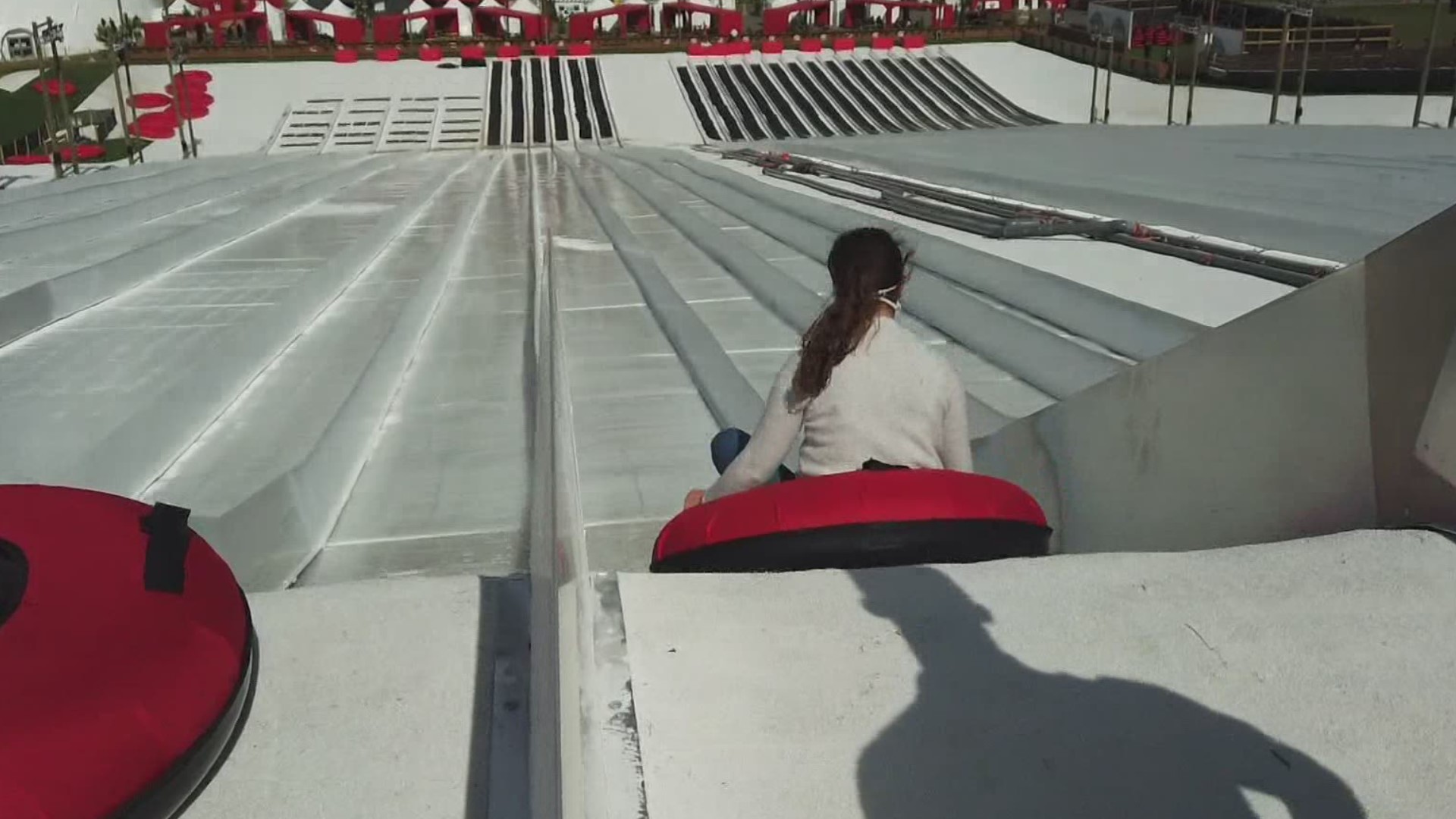 Who said it never snows in Florida? Certainly not Snowcat Ridge in Dade City.

It's the first and only outdoor snow park in all of Florida. The park consists of the Snowy Slopes, Arctic Igloo and Alpine Village (food, drinks, beer, wine and shopping).

The Snowy Slopes is a 60-foot tall, 400-foot long snow tubing hill. The cold surface of the slopes is able to stay cold enough during the late afternoons and evenings to produce a fun, icy sliding surface. Even if it’s a warm evening, you won’t sweat getting to the top. Riders are transported to the top of the hill on Magic Carpet conveyor lifts.

Sure they can make an icy surface in the warm Florida air, but actual snow?

Snowcat Ridge says absolutely. Despite temperatures in the low 80s Thanksgiving week, Vanessa Evans, of Snowcat Ridge, says the snow is flying through the air right now in their Arctic Igloo. How much snow? Enough to fill 10,000 square feet.

The Arctic Igloo features a snow play area (great for building the perfect snowman) and a bunny slope for riders under 42″ tall, designed especially for children 3 years old and younger.

So, this winter wonderland can handle our warm Florida fall and winter weather with no problem. While there was a snafu with the magical snowmaking machine inside the igloo this past opening weekend, it was actually due to a tropical storm and misestimation -- not the warm weather.

Tropical Storm Eta unleashed its power on much of Tampa Bay and caused some electrical damage to the igloo’s winter-making magic. Evans also says the demand, and the amount of needed snow, was a bit misestimated.

But snow lovers, don’t worry. The repairs have been made the hours have been adjusted to make more snow. A snow advisory is issued for the igloo through March of next year.

Often when you see snow in Florida, it’s soap bubbles. But the snow at Snowcat Ridge is the real deal. Hey Elsa, “Do you want to build a snowman?” Evans says head into the igloo and build away. There’s now plenty of snow for everyone. Keep in mind, though, that snow requires winter temperatures. The Arctic Igloo is kept at 30-degrees. Did you move to Tampa Bay from Minnesota? If so, you’ll feel right at home.

So how do they make that snow? Everyone wants to know. For that question, we go to the Snow Meister himself, CEO Benjamin Nagengast. Nagengast will only jokingly say the snow is “two parts magic, one part water.” The park operators say they spent more than a million dollars researching the snow-making process.

Since they seem to have a secret sauce to making snow in Florida, I can tell you they have machines that make snow on ski slopes in the northern part of the country. They even make it for Olympic events.

In those cases, here's how it works: Cold compressed air is shot up through a nozzle, where it meets water and splits it into tiny droplets. The sudden loss of pressure robs the system of heat, rapidly cooling the water to form a tiny ice pellet. A giant fan now propels these seeds into the air alongside the fine mist of water droplets. These tiny crystals bump into more crystals, which attach and freeze growing into a snowflake.

Not all snow looks like a classic snowflake, though. For example, very cold, dry air produces small powdery flakes that don’t stick together. This snow is great for skiing. When the temperature is warmer, flakes melt around the edges, forming “wet” sticky snow, which is better for making snowmen.

Natural snow is all our planet used to know, but as global warming begins to take its toll on seasonal snowfalls, the skiing industry is increasingly using technology to make its own.

The best part about Florida snow? After visiting this winter wonderland, you can drive to the beach the very next day.