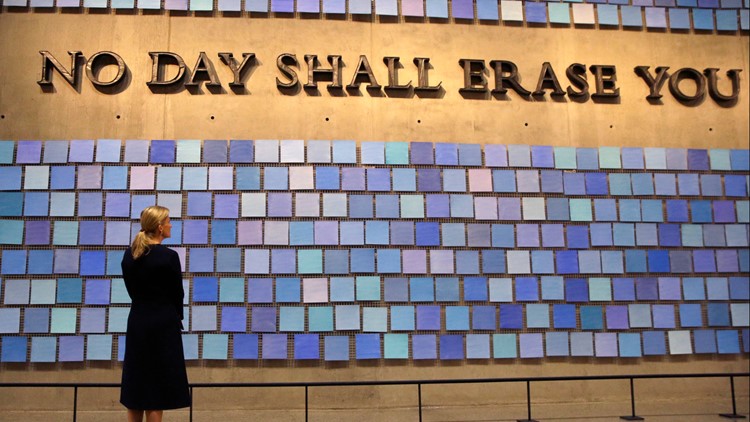 Photo by: AP Photo/Mary Altaffer, File
In this Nov. 11, 2015, file photo, Sophie, Countess of Wessex, pauses at Spencer Finch's "Trying To Remember the Color of the Sky on That September Morning" during a visit to The National September 11 Memorial & Museum in New York.

ST. PETERSBURG, Fla. — There are countless memories of the 9/11 terrorist attacks. For those who lived in New York City that day, many say they remember the color of the sky.

The National September 11 Memorial Museum features a stunning piece featuring 2,983 individual watercolor squares for every person killed in the Sept. 11 attacks and the 1993 bombing of the World Trade Center. Each is its own shade of blue, representing the perception of color on that day.

So what created those "severe clear" conditions?

A brand-new airmass had just settled into New York City, thanks to the passage of a cold front a day prior. The forecast map from Sept. 10, 2001, showed the front draped across New England, with the threat of showers and storms ahead of it.

And, in fact, it stormed that Monday in New York City: Central Park picked up more than an inch of rain, according to weather service data.

The weather a few hundred miles east of the city was particularly stormy, too, as Hurricane Erin swirled out in the Atlantic Ocean. It never posed a threat to the East Coast, and the cold front made sure of it by kicking the hurricane away from the U.S.

A striking image published by NASA shows Erin with a zoomed-in view of New York City and the burning World Trade Center towers.

"No day shall erase you from the memory of time," reads the inscription at the 9/11 museum, a quotation from Virgil's "Aeneid."