The tornado damaged several buildings and tore off roofs in Pinellas Park. 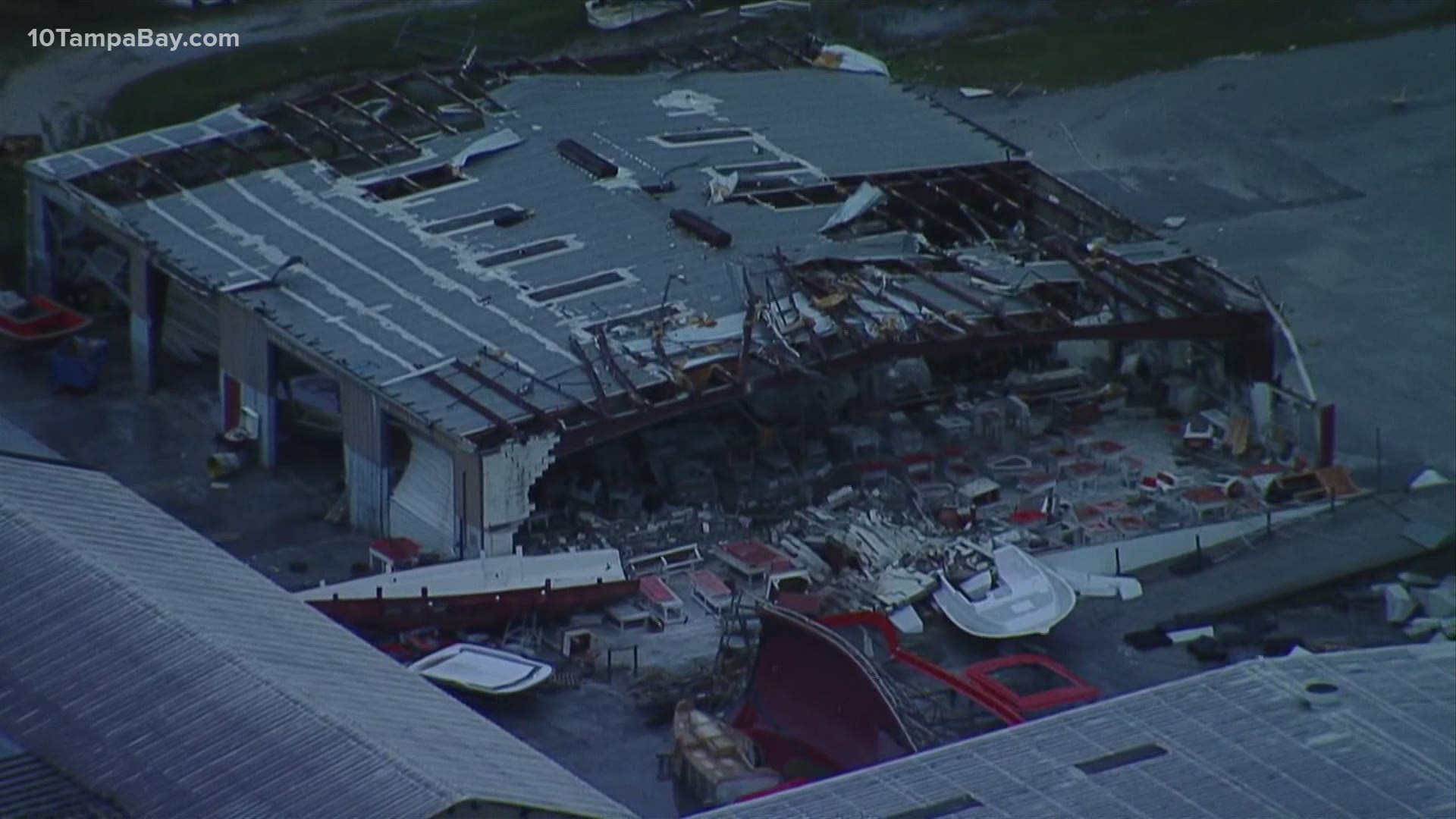 ST. PETERSBURG, Fla. — Update: You can find damage specific stories for your area below--

A cold front is sweeping through Tampa Bay Wednesday afternoon and evening, bringing some strong-to-severe storms to the area.

Duke Energy is working to fix "significant damage" to its Largo and Pinellas Park electrical grids. It is also repairing or replacing 25 power polls across the county that were damaged during the radar-confirmed tornado Wednesday.

Polk County Emergency Management Director Paul Womble reports three homes have been damaged from a tornado in the area. No injures have been reported at this time.

Crews are working to restore power in the area as power lines have been downed.

Damage assessments are underway from Pinellas Park to Tampa and parts of Polk County, where a tornado-warned storm moved through. Video from Sky 10 showed damage to rooftops in Pinellas Park, with debris thrown about.

A tornado warning for Polk County has been canceled.

Pinellas Park police report 25 buildings have been damaged in the storm. At this time no injuries have been reported.

A tornado warning is canceled for Hillsborough County but remains in effect for Polk County through 5:30 p.m.

A tornado warning is in effect for parts of Hillsborough and Polk counties through 5:30 p.m.

A radar-confirmed tornado was located near Plant City and is moving east.

The Florida Highway Patrol shared photos of damage reported in Pinellas Park following a radar-confirmed tornado in the area.

A tornado warning is in effect until 5:15 p.m. for northeastern Hillsborough County.

Pinellas Park Police and Fire Departments and other county first responders are working several areas in the city impacted by the recent storm moving through.

Authorities said there has been structural damage in both residential and industrial areas.

The damage appears to mostly be in the area of Bryan Dairy Road and 66th Street as well as 49th Street north of 118th Avenue North.

Duke Energy reported more than 14,000 people were without power in Pinellas County.

TECO said about 4,700 people were without power in Hillsborough County.

The National Weather Service confirmed a "large and extremely dangerous tornado" was over the Howard Frankland Bridge, southwest of Tampa, Wednesday afternoon. NWS said it was moving northeast at 35 mph.

🌪 AT 408 PM EST, A CONFIRMED LARGE AND EXTREMELY DANGEROUS TORNADO
WAS LOCATED OVER THE HOWARD FRANKLAND BRIDGE, SOUTHWEST OF TAMPA,
MOVING NORTHEAST AT 35 MPH. pic.twitter.com/KX8aFgHCYn

A tornado warning is in effect until 4:45 p.m. for Hillsborough County.

A tornado warning is issued for parts of Pinellas County until 4:15 p.m.

The cold front exits the area by late Wednesday into Thursday with strong high pressure building in behind the front. This will usher in some drier and cooler air on Thursday and Friday.

The coldest night will be Thursday night into Friday morning with temperatures dropping into the mid-30s along the Nature Coast and low to mid-40s near Tampa Bay. Highs will be in the 60s Thursday and Friday.

Temperatures are moderate by Saturday as temperatures move back into the low 70s.