Allan Ackles' was reunited with the ring that was taken from his football locker in 1968. It was found by a man who also happened to lose his class ring in 1965. 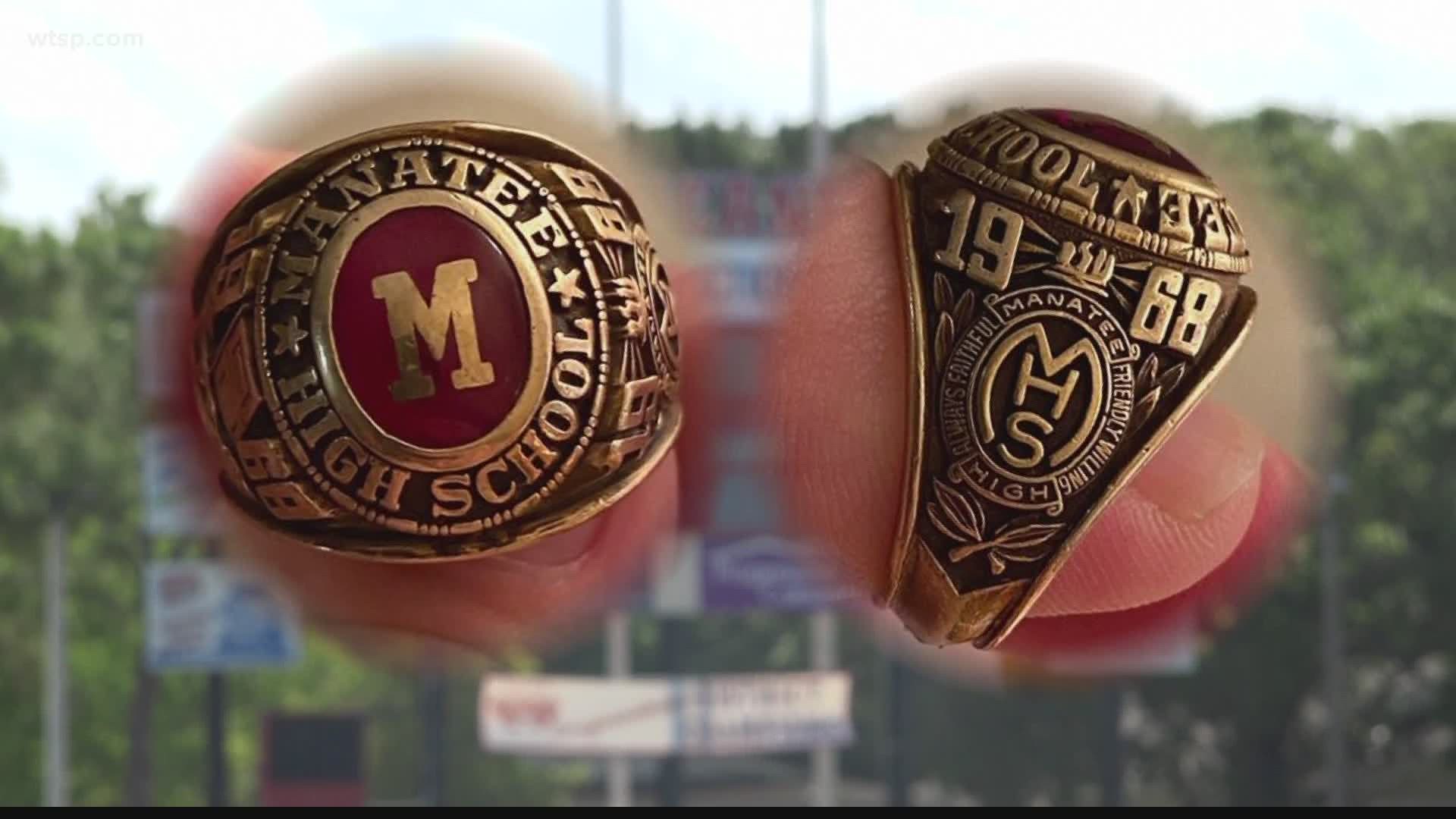 BRADENTON, Fla. — It doesn’t fit quite the same as it used to, but Allan Joe Ackles is just glad to have his class ring back.

“I couldn’t wait to give it to my girlfriend at that time,” he said as he held up his pinky finger. “I remember it like it was yesterday.”

Ackles played baseball, football, and basketball for Manatee High School and graduated in the class of 1968. One day, while at football practice, someone pried open his locker and took his new class ring, leaving the wallet and watch alone.

“Extremely mad,” he recalled. “I was banging, and kicking, and screaming, and hollering but it didn’t do no good. I was just so dadgum mad.”

He thought it was gone forever.

Six years ago, Moody Johnson, a 1965 graduate of nearby Lincoln Memorial High School, was mowing grass when something shiny caught his eye. It was a class ring from Manatee with the initials ‘AJA’ inside the ring.

“I knew that this person probably missed his ring as much as I missed mine,” said Moody.

Moody lost his class ring while serving in the military in Germany in 1966, ironically, playing football. He knew a find like this ring would matter to the person still without it.

“It pleases me that I had a chance to give it to him,” said Moody.

Moody took it home and kept it safe until coming across it again in recent weeks. He contacted Doug Schofield. He had graduated in the Manatee class of 1991 and has been a volunteer football coach with Manatee for a year.

“I dream about finding something like that,” said Schofield, an avid metal detector. “Those are things you can’t make up.”

He contacted his brother-in-law, Tim Eason, Manatee class of 1979, who contacted Carolyn Keller with the Manatee High School Alumni Association. They tracked down a 1968 yearbook and scoured the pages for a senior with the initials ‘AJA’.

Ackles was there. He was the quarterback on the 1968 team.

“My God,” said Schofield, “This is before I was born.”

Phone calls were made. Dots were connected. On Saturday, May 16, Johnson, Schofield, and Eason made the trip over to Ackles’ home for the ring reunion. The quartet spent the better part of an hour laughing and sharing stories from the “good old days”.

“It’s a nice part of me to have back,” said Ackles, whose son, Allan Jr., graduated in 1991 with Schofield.

The ring has returned and Ackles couldn’t be happier. It was missing for nearly 53 years.

“I lost my class ring in Clearwater at a beach volleyball tournament I was in,” said Eason. “That’s the best thing is getting it back.”

What makes the ring reunion extra special is how it has connected men from across multiple generations who call the Manatee area home. They give a lot of credit to Carolyn Keller of the MHS alumni association for connecting them all quickly. It only took about a week to get it into Ackles’ hands after Schofield got a initial phone call from Moody.

“I think we spent about an hour there talking and going over memories from school,” said Schofield.