Claire Barrow started RareGuru after she, her mother and grandmother were all diagnosed with a rare bone disease in summer 2019. 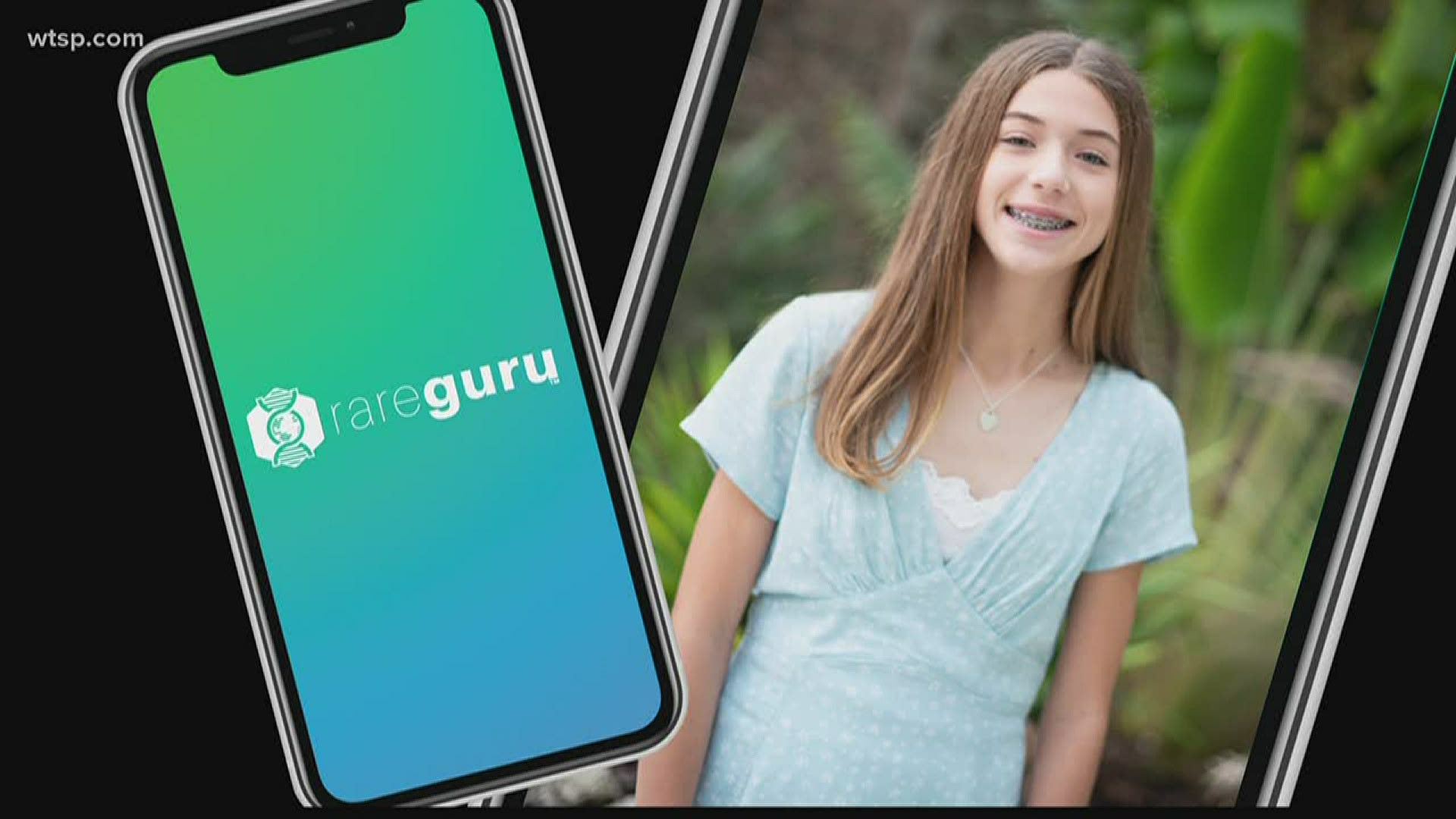 TAMPA, Fla. — Claire Barrow grew up playing tackle football with her cousin. He loved playing soccer and lacrosse, too.

“I’m one of those people who have to be moving all the time,” the 13-year-old said. “Now, I just have to watch out more.”

However, Claire's rare diagnosis from last summer has forced her towards non-contact sports. In July 2019, Claire, along with her mother and grandmother, was diagnosed with hypophosphatasia.

“It’s a bone disease which makes your bones and teeth really, really soft,” she said.

Claire couldn’t find anyone else in her area with the disease, so she decided to start an online community where people facing similar medical situations could congregate and share treatment ideas and support. The family started working on the RareGuru app in September and launched it last week.

“Rare guru is a social media app that connects patients, caregivers, and many other patients and caregivers who are caring for or have the same disease as you,” Claire said. “It is really good when you were going through a difficult time and you don’t know what to do. It brings a lot of solutions and you can even meet people to become your lifelong friends.”

Claire's mother, Heather, 41, has dealt with symptoms of hypophosphatasia most of her life, but it went undiagnosed until last year. She’s like millions of others across the globe.

“There are 400 million people in the world who have been diagnosed with a rare disease and obviously many more who have not been,” Heather said. “I believe the numbers in the United States are one in 10 people with a disease in their lifetime so there are many people out there right now with overlapping symptoms they don’t seem to have any explanation and we want RareGuru to be a place for those people to go.”

The RareGuru app allows patients and caregivers to enter their symptoms into their profiles so others with similar symptoms can connect.

Claire started losing teeth just after turning one. That was the first sign that something was wrong. Later in life, she broke her arm on a string.

Trips to doctors and specialists turned up nothing and frustration mounted for the family.

Heather lost a few teeth as well. Bone pain was a common sign of their disease.

The app saw new users in the United States, Canada, Australia, Ireland, United Kingdom and New Zealand in just its first week of availability. RareGuru is currently available for free in the iOS app store and is coming soon to Google Play.

“We are getting connection requests already from people in other countries so that’s cool,” Heather said.

The Barrows hope to expand to multiple countries and other languages besides English.

“It makes me feel so amazing because I don’t want anybody to go through the same stress and confusion that we went through,” Claire said. “I feel like this is an app that can help so many people and it can help make their journey so much easier and make it go faster.”

If you don’t see your rare disease when establishing a profile on the app, RareGuru works to find it.

“Heather Barrow and her daughter Claire were diagnosed in 2019 with Hypophosphatasia, a rare genetic metabolic bone disorder,” the RareGuru website states. “The Barrow family felt isolated and helpless as they struggled to find information and resources on their rare disorder. They were forced to become the experts or gurus, of Hypophosphatasia. The Barrow family created RareGuru to connect and empower patients, caregivers, teens, and parents with rare diseases, disorders, and syndromes across the globe.

“The average time it takes for patients to receive a rare diagnosis is 4.8 years, and 95% of rare diseases lack an FDA approved treatment. Our family created RareGuru to eliminate the time, frustration, and isolation that accompanies a rare diagnosis. RareGuru empowers users to connect, share, and heal together because a disease may be rare, but hope shouldn’t be."