Jake Klopfenstein has been contacted by hospitals in multiple states asking for his nonprofit's "dry fishing kits". 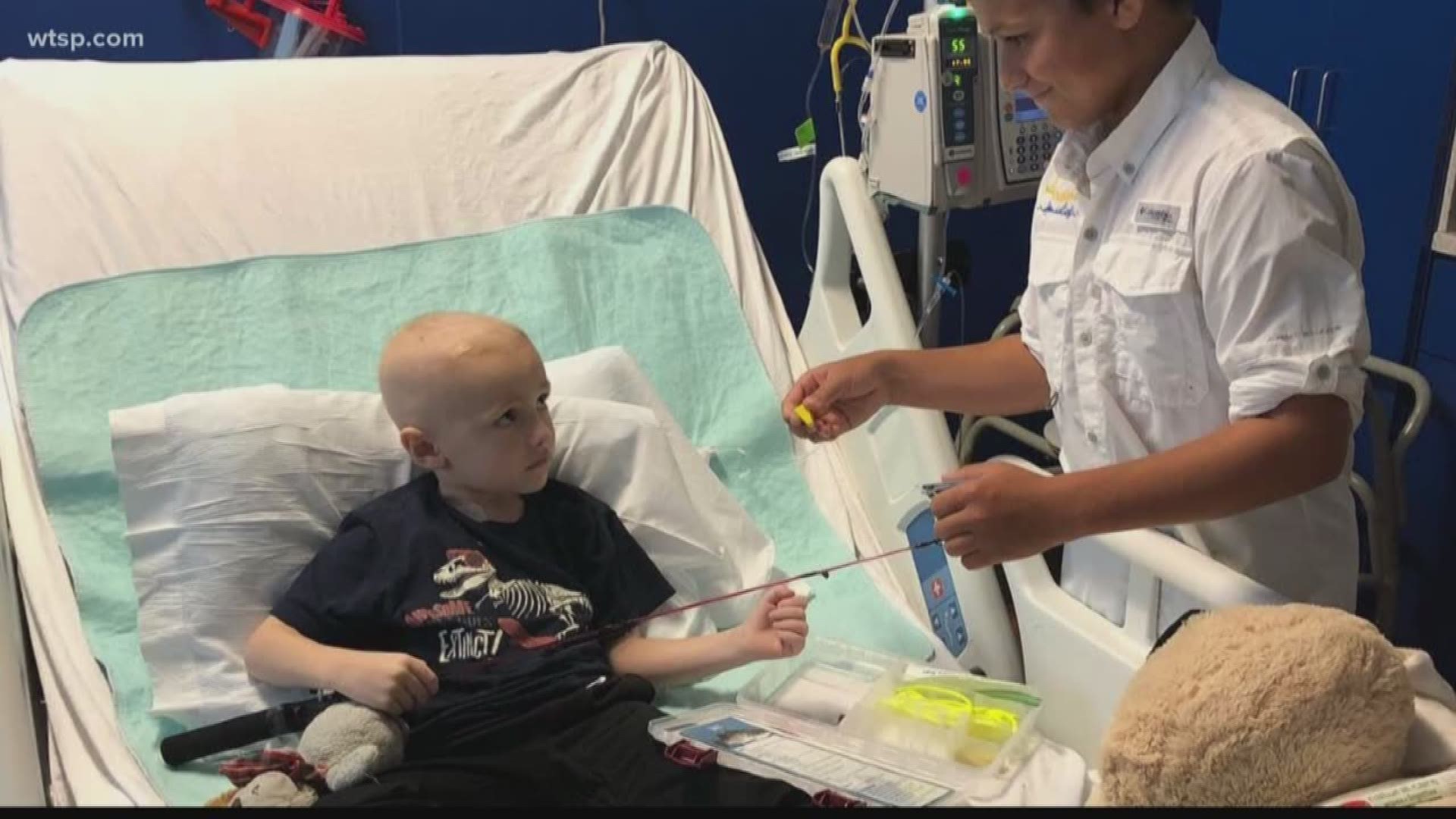 TAMPA, Fla. — Jake Klopfenstein loved playing soccer but decided to quit the sport. He says he’s found something much better to do with his time.

“You can beat a video game, but you can’t beat fishing,” he said. “Well, you probably can, but you have to be really old.”

An avid fisherman, Klopfenstein was inspired to bring the hobby indoors for kids stuck in hospital beds. With the help of his parents, neighbors, and friends he’s created “Dry Fishing Kits” and delivers them to kids enduring health struggles.

“Sometimes they can’t put their excitement in words,” said Klopfenstein. “The kids are a lot happier, and that’s the main goal, just to find relief through fishing.”

He started a nonprofit called Angling For Relief. There are nine items in the dry kits including casting line, string, nail clippers and information cards about various fish species. Each kit comes with a bullseye sticker on the back and a fishing pole. The idea is for kids to cast at the bullseye and forget about health worries for a while.

Klopfenstein has even seen kids casting while taking chemotherapy treatments.

“It’s been amazing. Just being able to see Jake’s vision come to life has been incredible in itself,” said his mother, Toni.

Angling For Relief also takes pediatric cancer patients or survivors, along with their families, on fishing outings. The four-hour fishing days from land give them a chance to get their minds off cancer.

“That’s been the most rewarding for me,” said Toni. “They have experienced anglers who teach them how to fish. The parents just sit back and let their kids be kids.”

Jake has given out over two dozen kits in the first year. The items are either donated or purchased from donation funds, usually from area fishing shops at wholesale prices. The cost is low, but the impact is high.

Over 40 people, including the Plant High School fishing team and a few local boat captains, gathered in early December to assemble more than 100 kits. Angling For Relief has been contacted by hospitals in Orlando and St. Louis who have shown interest in the dry fishing kits. The desire to help others fuels Jake’s will to give.

“This is going to be the most we’ve had in our stock by far,” he said.

All of this was inspired by a boy named Ryan Baker. Jake and Ryan were friends before Ryan, who was five years Jake’s elder and passed away due to complications from Ewing’s Sarcoma.

“(Jake) wanted to do something to share Ryan’s kindness,” said Toni. “Ryan was 13 when he passed away.”

Dressed in a blue hooded sweatshirt, 8-year-old Atticus Lemieux carefully pieced together the dividers in the plastic for the dry kits. He smiled as he worked and shared stories of catching a baby hammerhead shark. His brother, Oliver, is dealing with cancer. The dry kit in Atticus’ hands will end up in a hospital room with a child just like Oliver.

“I just wanted to care for others,” he said. “It’s just being nice and very caring.”

May 2020 will mark two years for Angling For Relief as an community outreach program. Deliveries are the most fun part of this outreach. The looks on the faces of the children who receive them makes long nights of assembly worth it.