The Wild Seafood Company got a grant from the Catch Together program to get money in the pockets of fishermen and food on the plates of hungry Tampa Bay residents. 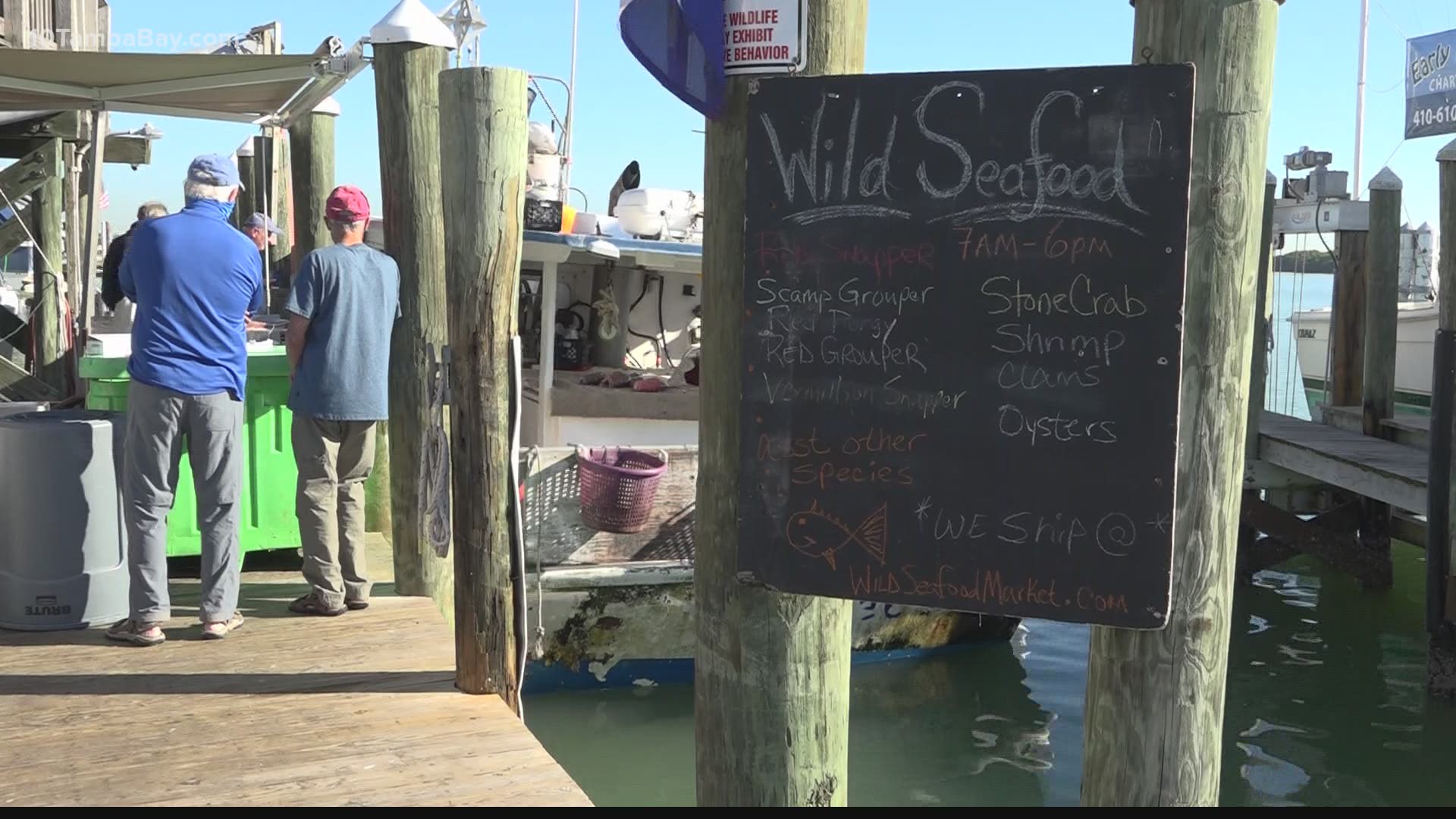 MADEIRA BEACH, Fla. — A half-dozen people spent a few hours this week unloading the “Miss Rebecca” on the dock behind Wild Seafood Company. The flurry of activity continued for hours. Erin Grebenev only put her calculator down for a few moments to answer questions about how special the process made her feel.

“This has been an amazing opportunity,” she said. “It’s so cool to watch a boat offload.”

This has been the scene at John’s Pass since October. Jason Delacruz, the owner of Wild Seafood, sends out one of his fishing vessels and it will return with thousands of pounds of fish. They are tagged, separated by client, and then a portion is placed in a box to the side to feed hungry families in Tampa Bay.

“We are at a need level that we have never seen,” said Delacruz, who has been operating Wild Seafood since 2012.

Hundreds of pounds of freshly caught red snapper were loaded into a box marked ‘Catch Together’ this week. The label represents the name of the program designed to support local fishermen and feed families in need.

Delacruz, who had to stop running boats for a brief period last spring when the pandemic began to ramp up, got a grant from Catch Together this year in the $200,000 range to offset the price of the fish caught by his crews. That money paid for the donated food, which was sent up the road to the St. Pete Free Clinic.

“We would not be able to do what we do without partnerships like this,” said Shaina Bent. “COVID-19 has forced us to think outside the box.”

Bent has served at the St. Pete Free Clinic for nine years. She says the food lines at the clinic’s pantry are routinely jammed this year due to the pandemic. The pantry serves upwards of 1,600 families per week at its peak.

“We don’t see a lot of fish,” she said. “To be able to provide this, it’s not only, gain, healthy and something that clients want, but that’s sourced locally and sustainably, it’s just something really exciting to come together in one donation.”

Having the ability to offer fish caught just offshore instead of more boxed or canned items is a welcomed change.

“There’s been times where I was wondering where I was going to get my next meal and wishing that I had someone there to help me,” said Captain Laramie Williams, who spent 12 days on the water in mid-January. “It’s feels good to give back when the fishing is good, and we can afford it.”

Wild Seafood has survived the pandemic with direct sales in its retail market which is directly connected to the dock. Many restaurants have been “hardest hit”, says Delacruz, by the pandemic. Sales are down almost everywhere. Less demand means fisherman have struggled, too.

Catch Together is a project of Trust for Conservation Innovation, a 501(c)(3) nonprofit that supports innovative conservation endeavors. The Catch Together program was created by Catch Invest founders in 2017 to build a nationwide network of community permit banks, connecting fishermen’s long-term access to the fisheries resources they depend on, and ushering in a new generation of fishing leaders. We believe that financially successful fishermen will improve fisheries management.

The program not only helped the fishing industry, but it has sustained families hurt by job loss as well.

Delacruz knows domestic fish are expensive, but he hopes to continue a similar donation program as 2021 continues. He pledged 20,000 pounds of fish to the St. Pete Free Clinic last summer. Catching and donations towards that goal began in October and Wild Seafood is nearing that pledge. This week’s catch put them over the 16,000-pound mark.

“You’re doing what you do every day but you’re doing it to help people,” said Delacruz. “How much more reward can it be?”

The entire process has been a win-win for everyone involved.

“To receive something like grouper and red snapper, healthy food, something the community wants,” said Bent. "It’s just something really exciting to come together in one donation.”