Project G.O.A.T. will auction off 55 goat statues in 2021 at Super Bowl 55 in Tampa. Money raised will be given to groups who fight human trafficking. 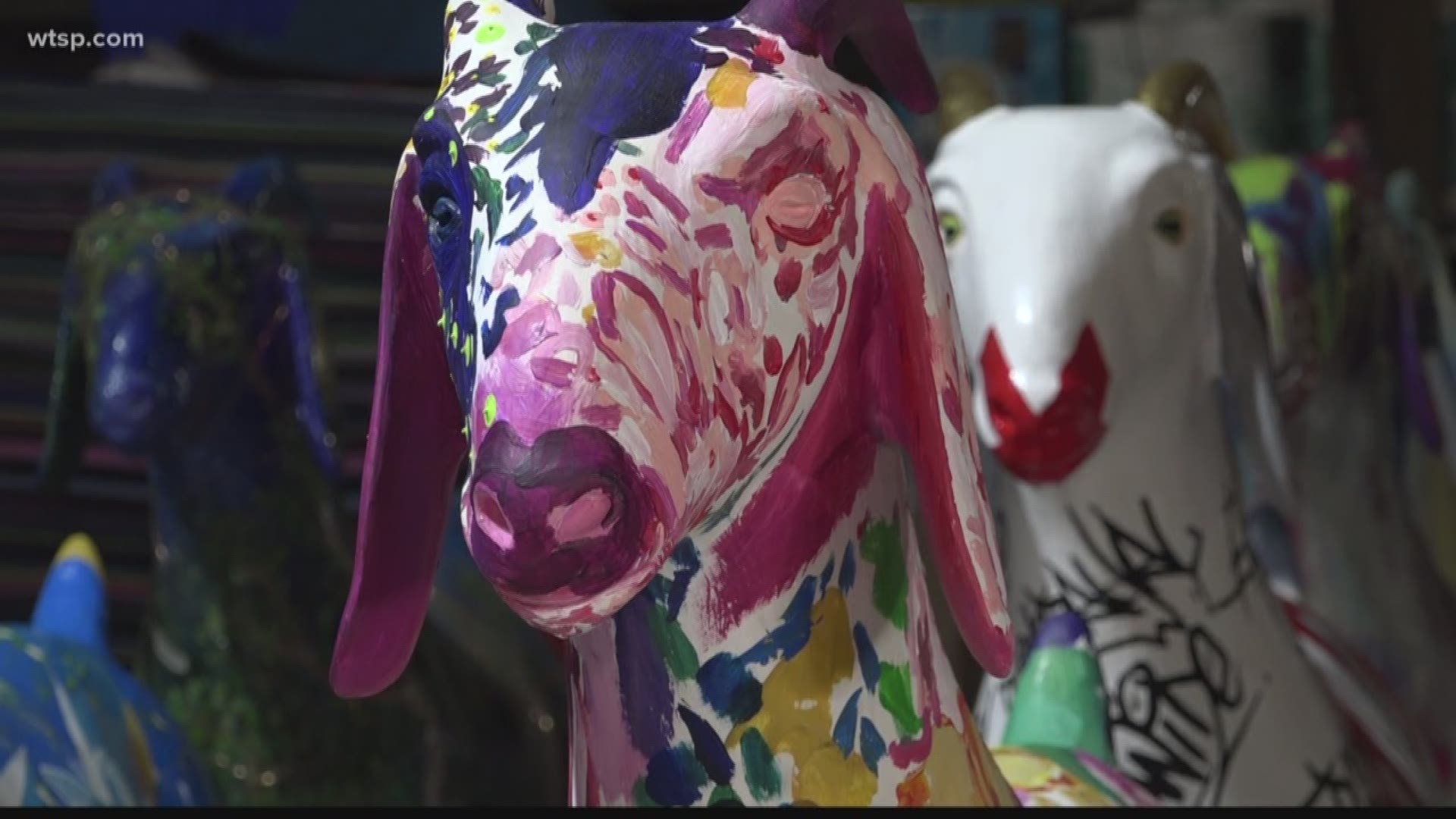 THONOTOSASSA, Fla. — There are plenty of goats roaming on Rob and Debbie Canton’s farm.

The Thonotosassa couple started by rescuing seven goats from heading off to market after being raised at nearby Strawberry Crest High School. The group has grown a lot since then.

It takes a lot of work to care for them all. But, it’s the 49 goats in the barn that have been occupying Rob’s attention for weeks.

“I see some amazing dedication and passion from the artists,” he said as he eyed the three-foot painted statues he’s collected from local artists. “There are actually pictures on this one of girls that were rescued from a life of being trafficked.”

The goats are part of what Rob is calling Project G.O.A.T. The acronym stands for Global Offensive Against Trafficking.

More than a year ago, he got the idea to paint goats for charity. It grew into 55 artists painting 55 goats to be auctioned off at Super Bowl 55 in Tampa.

All the money raised will be donated to organizations dedicated to fighting human trafficking, like A21 and others.

Rob has already told his wife he wants to do this again at Super Bowl 56 when the game is played in Los Angeles.

“It’s important, though,” he said.

He spent more than 25 years working in economic development with tourism and sports – most recently with the Tampa Bay Lightning. When he started thinking about retirement, he began forming plans to make an impact with his skills.

A blog post by Bill Gates about how goats were empowering women in India caught his attention and sparked the idea for Project G.O.A.T.

“The Super Bowl, because it’s an event people are interested in … you’ll see that in city after city where people do talk about trafficking and other ills of society that surround these events. That actually is a positive that comes out of the Super Bowl. Even though there is still the risk of or the potential of generating traffic and impacting victims, it still is a way to bring the issues to the forefront," he said.

“It’s something a lot of people just don’t want to talk about,” he said.

The Cantons say many artists first thought they were being asked to paint a living goat. Once it was explained that they were needed to put their vision on architectural cast stone, it was a no-brainer for them.

“I’m touched that many people are involved,” said Ron Francis, who plans to put a giraffe pattern on the side of his goat because that animal has an enormous heart. “It’s a powerful topic. It goes pretty deep. It’s global and apparently the Tampa Bay area is quite large in the human trafficking industry.”

There is no dollar amount set as a goal for the project, but the Cantons expect there to be a high interest in Project G.O.A.T.

Visually, it’s sure to draw a crowd.

“I think it’s an effective way of bringing to life the important issue of trafficking,” Rob said.

The statues will be on display at Gasparilla Festival of the Arts on the final weekend of February. The event will be held at Julian B. Lane Riverfront Park in downtown Tampa.

"I'm praying that God will lead Rob and Rapha International to partner more in the future to rescue more kids from trafficking," said Dee Perconti, one of the artists who designed a goat. Hers features photos of actual women who have been rescued from a life of trafficking.

The Cantons have used goats as a way to give back for four years now through their non-profit called Grady Goat Foundation. It was named for a goat that was born on the farm blind, deaf and unable to walk on his own. He was unable to stand long enough to drink his mother’s milk or play with the other goats at what is now known as Grady Goat Farm.

One of the largest Grady Goat fundraisers has been goat yoga on the property Saturdays and Sundays. The entry fee is $35 and goes back into helping kids with medical issues.