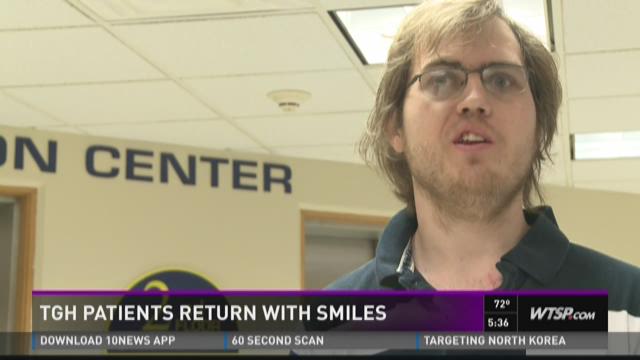 Things are looking up for Zach Ward.

“About a year and a half ago I couldn’t even roll over in bed on my own,” he said with a smile. “To be standing here talking to you now without a cane, without a wheelchair, this place was a means to getting my life back.”

Ward spent over two months recovering in the Tampa General Hospital rehabilitation center after suffering a brain hemorrhage in October 2014. Just over a year later, he walked across the stage at Southeastern University’s graduation ceremony with his bachelor’s degree in practical theology.

“I wasn’t supposed to graduate,” he said. “This is a goal of mine. I didn’t think I was going to be able to reach it but through the help I received I was able to get there.”

His therapist was the one helping him across the stage.

It’s just another example of the success stories that exit the rehab center after grim outlooks enter.

“I think it means hope,” said Ward’s wife, Mariah. “It’s deeper than a friendship. It’s like an understanding. I’ve seen what you walked through and I walked with you.”

TGH hosted a rehab reunion on Tuesday to bring patients and therapist back together face-to-face to share hugs and stories about their growth.

“Everybody is so caring and you feel like you’re truly part of a family,” said Vincent Lanci, who was brought to the hospital in a coma after being hit back a drunken driver.

TGH expanded its rehab reunions to twice per year. So many success stories were happening that there wasn’t enough room to house them all in one session.