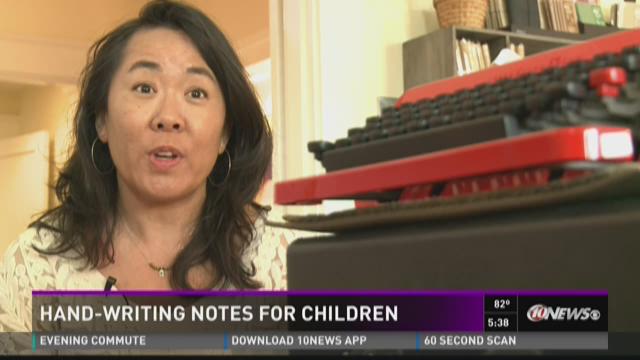 Tona Bell sat in the corner of her Paper Seahorse paperie with a smile on her face, banging away on her typewriter.

Bell and the rest of the women in her shop this day are self-described letter lovers and are taking the art of handwritten notes to new heights this month.

“That’s the thing,” said writer, Julie Clarke. “Somebody took the time to sit down and write something to you.”

It’s somewhat of a lost art in the age of cell phones, endless texts and instant gratification.

But, this group is putting pen to paper the “old-fashioned” way and making a difference with each stroke.

“We’re writing letters to All Children’s (Hospital),” said Trudy Anderson. “I lost a child so this is very hard for me. So, it’s therapeutic.”

The letters the group writes are delivered to people who need a smile at All Children’s Hospital, The Alpha House and Meals on Wheels.

“There are 39 residents right now and our goal is to write to every single one of them,” Bell said of the Alpha House in Tampa, which cares for and shelters single mothers. “I think that people need to get out from behind the screen. They’re either in front of the TV screen, the computers screen. You’re in front of your phone screen. I think people should keep in touch more.”

The best part about writing the letters by hand is that it gives your words a personal touch. In 2016, it’s almost unexpected.

1 / 6
<p>A group at the Paper Seahorse paperie keeps the tradition of typewritten notes alive and sends them to hospital patients and women in a shelter. WTSP photo</p>

“It makes you take time to express your thoughts and really communicate,” said Michele Vatalaro, who grew up using a typewriter. “I still like getting cards. Cards are great.”

April is National Letter Writing and Poetry month. The Paper Seahorse is open Monday through Friday 10 a.m. to 5 p.m. and Saturdays 11 a.m. to 4 p.m. and is located at 211 S. Howard Ave. in Tampa.