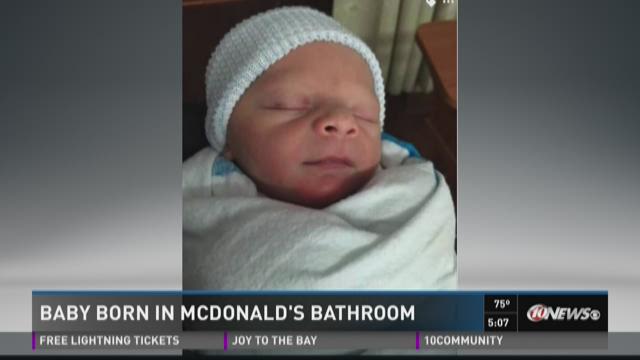 SARASOTA, Fla. - A fast delivery at a popular fast food restaurant. Parker Jordan decided to be born a month early while his mom was having breakfast at a McDonald's here.

The birth took place at the McDonald's off 6347 South Tamiami Trail and Stickney Point Road. Cashier Nancy Jones was on break Saturday morning having breakfast with her daughter April when they heard a cry for help.

“We heard screaming, yelling so loud you could hear in the back of the store,” said Jones.

April Jones said, “I looked around and the screams were coming from the bathroom. Next thing I see her husband running to the bathroom. He said 'She’s pregnant.'”

April ran after the father-to-be. His wife was locked in the stall. Once inside April checked Cathy Jordan and saw that the baby was crowning. They laid out a couple of jackets on the floor for Cathy.

April said, “I put on gloves. She was dilating really fast … baby’s head is popped out, now the cord is around the baby’s neck.”

April, an LPN who works with the elderly, says her training kicked in.

“As soon as I get the baby turned she pushed out one more time. He’s out in my hands, blue as your shirt … Next thing she pushes again, here’s the afterbirth, placenta, cord, everything,” recalled April.

By then, baby Parker should've been breathing on his own but he wasn't.

“The baby is gasping for air like a fish out of water," April said. "Oh my God, this baby is still blue.”

Paramedics arrived, April and helped them cut the cord. They gave the baby oxygen and took him to the ambulance.

Soon after paramedics gave April the good news. She said, “I go to the ambulance because I know that’s where they have the baby. The paramedic opens the door, gives me the thumbs-up. He’s breathing and his eyes are open. It was like one of my kids was born - that amazing.”

Nancy said, “I’m so extremely proud of my daughter (April), that’s my one and only … so proud of her.”

April said, “I was put there at that location at that time by God to bring this baby into the world. His mom’s got a really good Christmas gift there.”

We spoke with the baby's mother over the phone today, but she had just learned of a death in the family so we chose not to ask for an interview.

As for April, she says this experience has made her rethink her career. She may go back to school and take the eight classes she needs to become a registered nurse and work with labor and delivery.