Florida has gotten more than 2,100 reports of price gouging ahead of Hurricane Dorian

One man got a refund after he was mistakenly charged nearly $10 per gallon of gas. 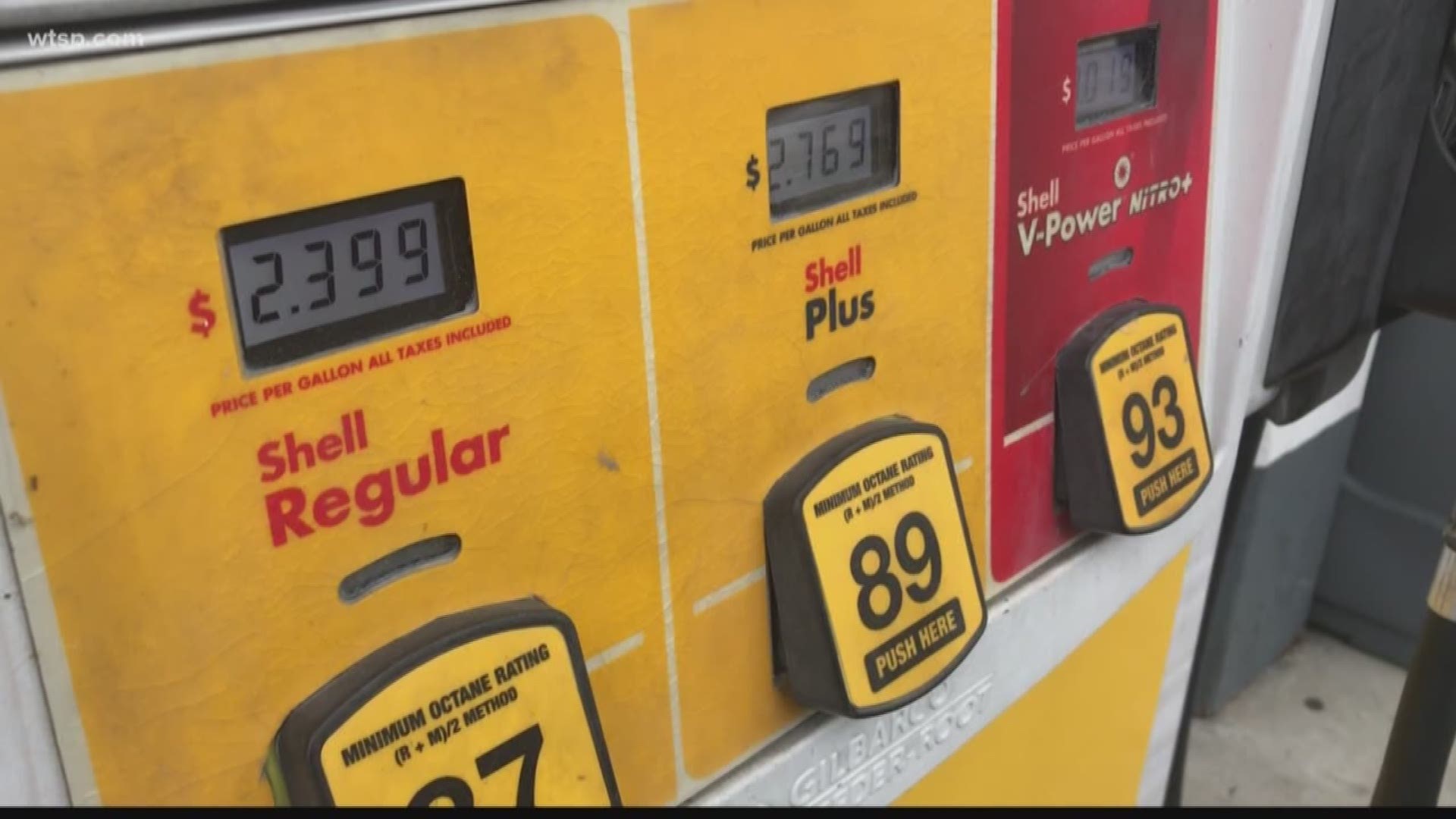 TAMPA, Fla. — There have been more than 2,100 reports of suspected price gouging in Florida following the state of emergency declaration from Gov. Ron DeSantis. Approximately 600 of the complaints were submitted via the new “NO SCAM” app.

A spokesperson for Attorney General Ashley Moody said most complaints involve water and gas. The state is now starting to hear about hotel pricing as evacuations orders come down.

One complaint came from Robert Shoemaker in St. Petersburg. He was charged $9.99 per gallon for premium gas at a Wawa.

Shoemaker told 10Investigates by phone that he was in a hurry, pulled up to the tank, saw that they only had premium and began pumping. He later realized he was paying almost $10 a gallon.

10Investigates went to that station and the manager explained that when they run out of gas, their pumps turn to $9.99 and they do not have pump covers. The price for the premium gas, which the station still had, should not have changed.

"When we learned that a manual error at a few of our pumps temporarily showed a higher price, we found the error, immediately corrected it, identified approximately 13 customers who were impacted by it and are reaching out to each one of them to issue full refunds," said Wawa, Inc. Spokesperson Lori Bruce.

Bruce said all 192 Florida stores have been notified to review proper procedures.

Shoemaker says he first filed a complaint with Attorney General Ashley Moody’s price gouging hotline. He later was reimbursed all of his money and the Director of Operations for Wawa called him personally and apologized.

Attorney General Moody activated the price gouging hotline on Aug. 28. She says her Rapid Response Team has visited almost 150 businesses. She says most have complied, reduced prices and reimbursed customers.

It’s illegal for businesses to excessively hike the price of essentials like food, gas, water and hotel rooms during a declared emergency.

“When there are bad actors, we're responding and will hold businesses accountable. They need to know that,” said Florida Attorney General Moody.

Businesses violating the law can face civil penalties of $1,000 per violation, and individuals trying to re-sell items at a higher price face a 2nd-degree misdemeanor.

10Investigates has heard complaints from people across the state about everything from gas to water. One woman wrote in about a 24-pack of water at a wholesale store being sold for $17.69 in Orlando.

A red flag for gas prices in Tampa Bay is anything excessively higher than $2.39 for a gallon of regular unleaded. 10Investigates drove around Tampa and St. Pete, and that was the price at every station we saw.

If you see anything more expensive, you should move on and fill up elsewhere.  You should also document it by taking pictures and if you do fill up provide that receipt. You can call the Attorney General’s Price Gouging Hotline at 866-9-NO-SCAM or upload all information on the AG’s “NO SCAM” app.

RELATED: Gas Tracker: Search for gas stations with fuel ahead of Hurricane Dorian

Insurance companies are not allowed to drop your coverage because of an approaching storm.

The Office of Insurance Regulation says if a policy has been in place for at least 90 days, the only reasons a policy can be canceled midterm are for things like nonpayment of premium, material misstatement or failure to comply with underwriting requirements.

“Canceling a homeowner’s policy just because Hurricane Dorian is advancing would not be permitted under the statute,” said a spokesperson for the Florida Office of Insurance Regulation.

Insurance providers told us it is now too late to add or change flood and wind coverage because of storm restrictions that prevent them from adjusting policies.

Once the storm passes and those restrictions are lifted, you should add those.

The state also says any policyholder who experiences coverage issues should contact CFO Jimmy Patronis’ Division of Consumer Services.  That number is 1-877-693-5236 or 850-413-3089.  You can email consumer.services@myfloridacfo.com or click here.

After a storm passes and there is significant damage, the state can issue an emergency extension of coverage allowing policyholders more time to make needed repairs and hire the right contractor.

If you see suspected price gouging or have concerns about insurance coverage in Tampa Bay, please let 10Investigates know as well.  You can email us at TurnTo10@wtsp.com.