The former FSU student is accused in the shooting deaths of her mother and stepfather in 2015. 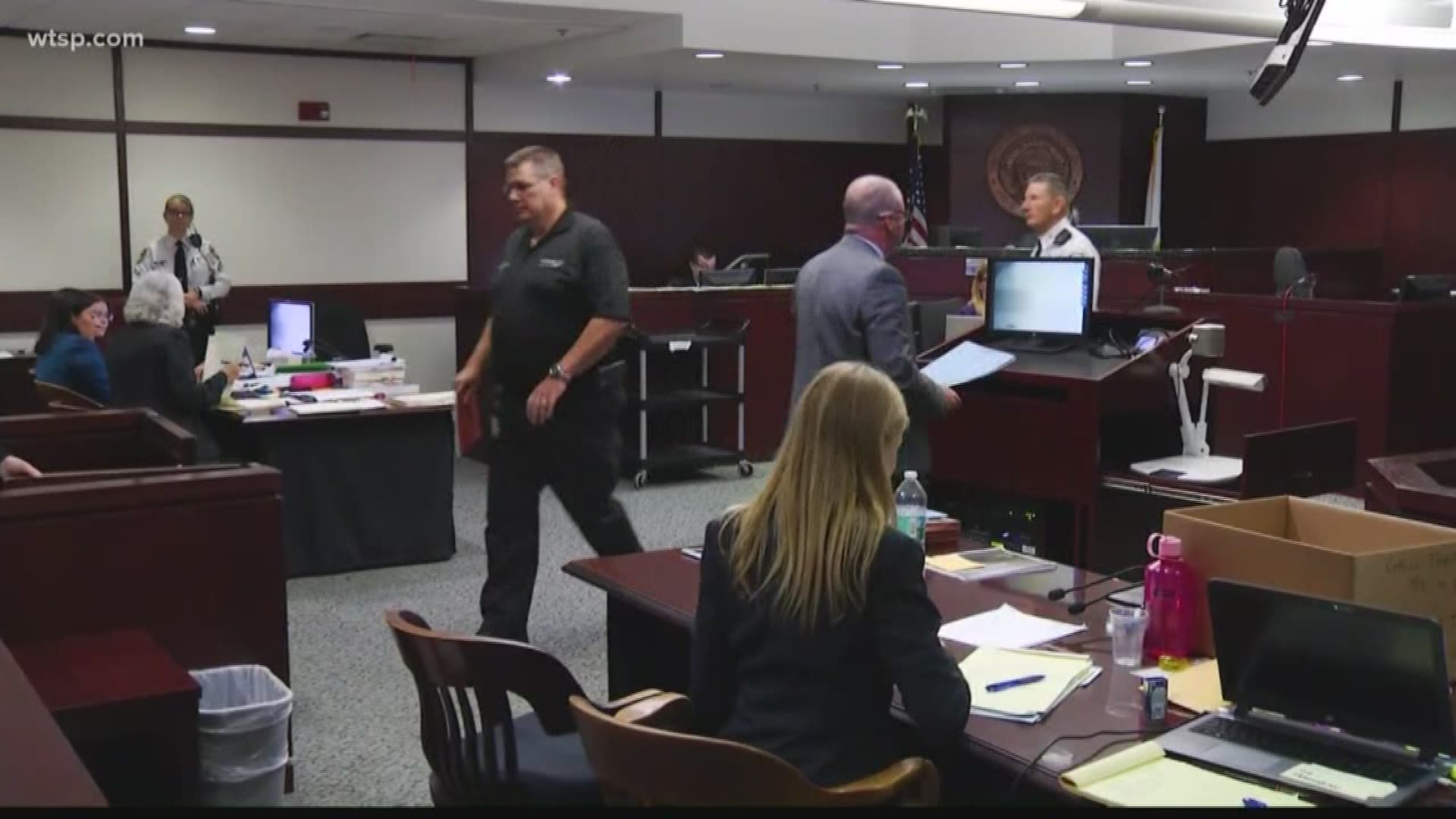 TAMPA, Fla. — Nicole Nachtman's trial continued Friday following speculation of a possible mistrial after rumors witnesses heard information outside of the trial or watched a live stream of the courtroom.

Three witnesses were brought in, one at a time, to be questioned by the judge and the defense to their knowledge of the trial before their testimony and were asked if they had watched live coverage online.

All three witnesses denied watching live streams. One witness claimed to have only heard a news anchor discussing the length of jury selection, while another said she had shared a link to the live stream with her parents -- so they could watch the testimony.

After briefly making a notion to strike the first witness, Judge Sabella decided to wave the motion and clear the witnesses to testify.

Nachtman faces two first-degree, premeditated murder charges after being accused of shooting and killing her mother and stepfather, Myriam and Robert Dienes. Law enforcement said they were both found dead from gunshot wounds in their Carrollwood home on Aug. 20, 2015.

Nachtman, who was 21 at the time, originally claimed she was at the university when the murders happened. The school told detectives her FSU ID had not been used in the previous seven days.

The trial for Nachtman, now 25, began Monday with jury selection, which continued into Wednesday afternoon. Opening statements got underway Wednesday afternoon and then the state called its first witness, a neighbor who was 14 at the time.

Several witnesses came forth Thursday to discuss the crime scene, including another neighbor, forensic specialists and detectives.

A Publix supervisor began the trial Friday morning, testifying the surveillance video captured on August 18, 2015, was Robert Dienes. Sergeant Carla Perez with the Hillsborough County Sheriff's Office reaffirmed this in her testimony by adding she received the receipts from the transactions between Publix, China Wok and Pep Boys.

The cross-examination from the defense questioned the match and said it is not uncommon for someone living in a residence to have their fingerprints lifted.

Nachtman's cousin, David Lehr, also testified in the case telling about his interaction with Nachtman during the summer of 2015. He testified she seemed to have a "regular demeanor" and said she had asked him to borrow $100 for the overflow housing fee she owed since she was late on filing for housing.

Lehr said it wasn't the first time she had asked to borrow money from him, so he didn't see it as odd. He said he drove straight to the Dienes' home after hearing about the murders and called both Nachtman and Nachtman's brother, Joseph.

"I was worried about her, I was just trying to calm her down, I didn't want something to happen at her school, but she said [law enforcement] was already there, so I calmed down," Lehr said.

Cross-examination from the defense tried to minimalize the relationship and bring to question the closeness of the two families. Lehr testified during the cross-examination that Nachtman did indeed seem nervous about the mistake and owing $100 for being late on residency because she didn't want her mother to find out.

Marial Battle, one of Nachtman's prior roommates in overflow housing and who is currently an FSU student testified about her experiences with Nachtman. Battle claimed Nachtman did not arrive at the residency until Friday and told her, if anyone asks, that she moved in the day before.

Battle also testified her mom had recently been in a car accident of some sort in Tampa, and she appeared to be "sweating and nervous."

The cross-examination of the defense again brought to question the fact Nacthman's family had not been present during her move-in like Battle's had been, and Battle agreed she thought it was strange.

Now that their testimonies have been cleared by the judge, three witnesses who interacted with Nachtman in 2015 and had been students at the time were told to expect to testify following lunch.

Following lunch, Petra Henry was brought to the stand to testify. Henry testified she originally met Nachtman on August 21 and she said she was surprised to see her as it was unexpected. Henry said she first saw Nachtman sitting in the top bunk with a blanket wrapped around her and said she seemed disheveled and tired. She added Nachtman didn't have sheets on her bed and was sitting with an empty suitcase and appeared to be mumbling to herself.

Jessica Gilbert, a residential worker at FSU at the time of the incident in 2015, was next up to testify and said she was employed with FSU for four years. Gilbert testified Nachtman was contacted by FSU in mid-to-late July about housing for fall 2015 after missing the deadline as a returning student. She added the deadline was January 2015, and Gilbert said housing would try to work on a contract with her.

The state introduced an email exchange between Gilbert and Nachtman as evidence, and Gilbert testified she recognized and remembered the conversation. She testified Nachtman had been informed she was seven months behind the deadline to apply for housing in July, and she confirmed Nachtman was offered overflow housing through email on Aug. 15, days before the shooting.

During cross-examination with the defense, Gilbert testified Nachtman was allowed to reduce her $100 fee for the overflow housing to $75. Gilbert also testified FSU housing had no contact with Myriam, Nachtman's mother, about the housing situation and that a form meant for a parent/guardian was left unsigned.

The state later asked Gilbert if Nachtman had Florida Prepaid and she testified she did, so she needed housing from FSU to be covered.

Christina Chiodi was brought in as a witness and testified she checked Nachtman into Smith Hall, where overflow housing was located around 9 a.m. on Friday, Aug. 21. She testified she informed Nachtman to fill out some paperwork and said she went over rules of the building before providing her a key.

Chiodi said her check-in process did not seem "out of the ordinary," and Nachtman did not appear to be upset or crying at the time of check-in. During cross-examination with the defense, she said she did think it was strange an upperclassman had been assigned into overflow since they typically have a priority over freshman or newer students.

Gale Berghorn, who was a digital forensics criminal lab analyst at the time of the 2015 incident, testified she extracted information from Nachtman's phone on November 6, 2015, when she assigned the evidence in the case. She testified about the processes and security of the evidence as it is processed, including the use of two programs which allowed her to accurately extract the information from the phone.

Berghorn testified Nacthman's phone was an Android, and the screen was shattered when she opened the sealed envelope with the evidence that was assigned to her. Berghorn added she was able to extract text messages from the phone and put them into PDF and Excel formats.

Berghorn testified again after a short break about emails extracted from the phone along with attachments showing Nachtman's interactions. She testified both Myriam and Robert Dienes' contact information were extracted as contacts through the extraction process, through text and email, along with 859 other SMS messages.

During cross-examination with the defense, Berghorn was asked to indicate search results highlighted, including searching for 'getting away with murder lyrics' and 'dropping out of college.' She testified that was the correct information extracted from the phone indicating the phone had contact with the search information with the two search options.

Berghorn also testified Nachtman received an email in regard to space available on campus for her housing on Aug. 19, 2015, according to the phone extraction information. The defense also questioned the legitimacy of the browser search information in the extraction, which Berghorn testified may have been skewed if it was introduced as a pop-up, which could also be extracted by the phone.

Berghorn testified there was a distinct difference between searching on a phone and the website history. The history, she testified, could be altered by pop-ups while the extraction distinguishes search history as a separate factor.

Lacey Zacher, a criminal intelligence analyst with the Hillsborough County Sheriff's Office, was brought forth to testify on cell phone records she helped to investigate starting in May 2016.

Zacher testified she was given phone records from the date of August 12, 2015, to August 21, 2015, which included the pinging of cell phone towers near the use of Nachtman's phone. The defense claimed her background did not appear sufficient enough in technology to be able to accurately map and visualize the phone records with the cellphone towers. Zacher testified she was not sure of the location of the cell phone but said it was pinged at a Tampa cell phone tower near the Carrollwood shootings.

Detective Samuel Portalatin was brought to the witness stand as the state's final witness of the day. He testified on finding and tracking Nachtman's vehicle and said he listened to the call between Detective Messer and Nachtman which he said happened not too long after the shootings. He also testified about other recorded phone conversations between the detective and grandmother and another relative, Eric Lehr.

Portalatin also testified he and Detective Messer flew to Tallahassee to talk to Nachtman on the morning of August 21. He said they swabbed Nacthman's cheeks to gather DNA evidence and searched her dorm room after being issued a search warrant.

The state expects to rest its case Monday. The trial will resume at 9 a.m. on Monday.