Adam Johnson, 36, from Parrish, Florida, would have to surrender his passport and wear a tracking device as part of the terms of his release. 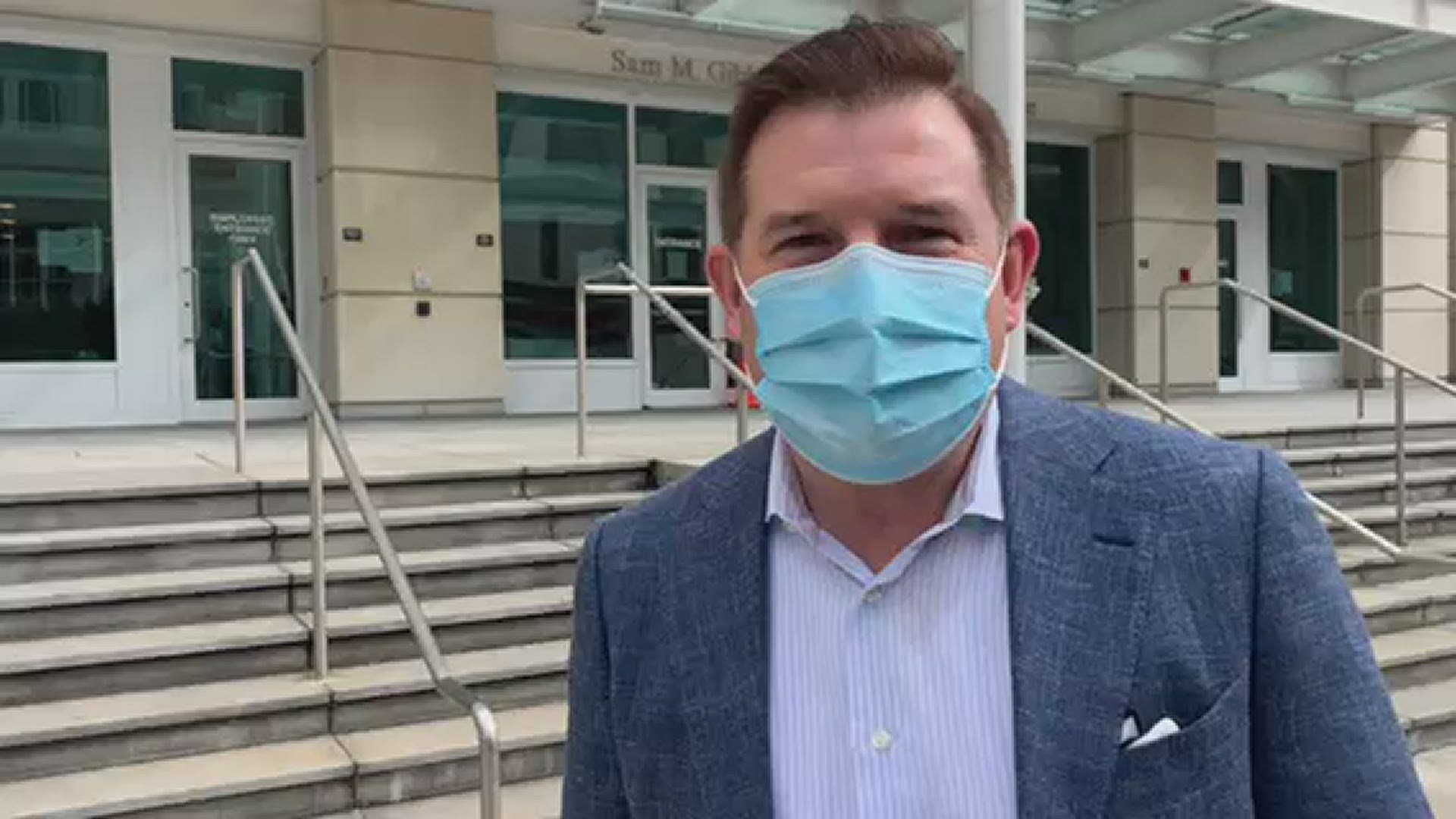 TAMPA, Fla — The Tampa Bay area man captured on camera smiling and waving while carrying the lectern of House Speaker Nancy Pelosi during the U.S. Capitol riot had a $25,000 bond set Monday in federal court.

If he pays the bond and is released, Johnson must surrender his passport, submit to substance abuse tests, surrender all firearms and wear a tracking device.

Under the terms of his release, he would not be allowed to travel outside the Middle District of Florida, unless it's to Washington, D.C., for court cases.

Judge Christopher Tuite warned Johnson violation of any of these terms could result in a 10-year sentence plus contempt of court charges. This, on top of any potential sentence from any pending charges against him.

Below is the video of him being booked into the Pinellas County Jail. 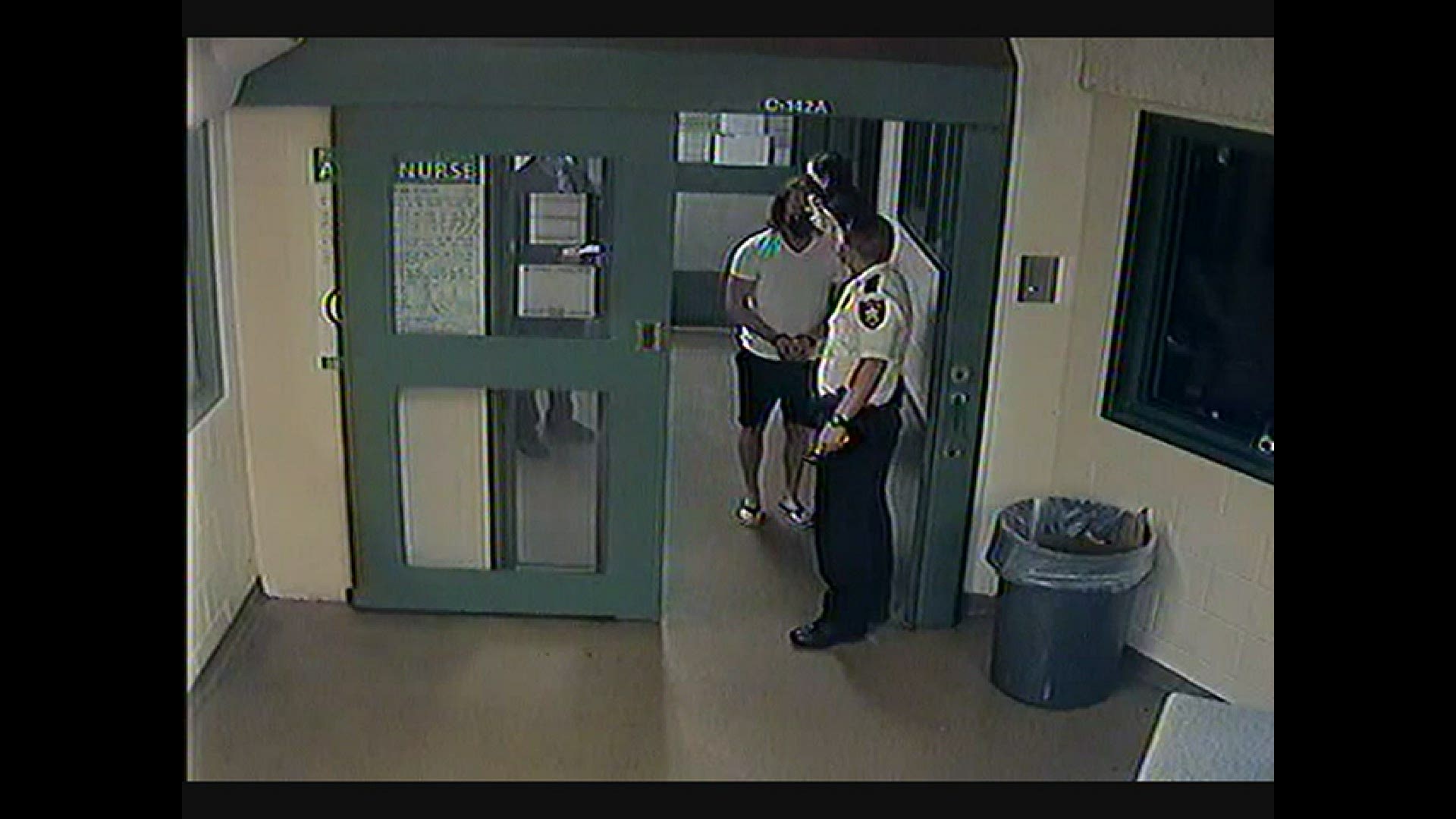 Johnson faces charges of knowingly entering or remaining in any restricted building or grounds without lawful authority, one count of theft of government property and one count of violent entry and disorderly conduct on Capitol ground, according to the U.S. Attorney's Office.

The case is being prosecuted by the U.S. Attorney’s Office for the District of Columbia and investigated by the FBI’s Washington Field Office and the United States Capitol Police.

A photo of Johnson, taken by Getty Images photographer Win McNamee, was one of many that went viral during the armed insurrection of the Capitol on Wednesday by supporters of President Donald Trump. The FBI searched for Johnson as part of a nationwide effort to find and charge those who stormed the building, according to the Bradenton Herald.

"It is alleged that on Jan. 6, 2021, Johnson illegally entered the United States Capitol and removed the Speaker of the House’s lectern from where it had been stored on the House side of the Capitol building," the U.S. Attorney's Office said in a statement. "A search of open sources led law enforcement to Johnson, who is allegedly seen in a widely circulated photo inside the Capitol carrying the lectern."

Credit: Win McNamee/Getty Images
A pro-Trump protester, later identified as Adam Johnson of Parrish, Florida, carries the lectern of U.S. Speaker of the House Nancy Pelosi through the Rotunda of the U.S. Capitol Building after a pro-Trump mob stormed the building on Jan. 6, 2021, in Washington, D.C.

According to the FBI's "statement of facts" related to Johnson's arrest, publicly available social media images and news articles aided an agent to locate the Florida man. The FBI's National Threat Operations Center also received a tip from a caller who claimed they shared a mutual friend with Johnson.

Further searches, including one that returned Johnson's driver's license picture, led to the positive identification, the FBI said.

The lectern and a gavel that was reported missing were found undamaged, The Washington Post reported, citing a spokesperson for the Committee on House Administration.

It was stored on the day of the Capitol attack in the Speaker's Suite, located under a staircase to the third floor of the House side of the Capitol building, the FBI said. A day later, the lectern was found in a corridor on the Senate side of the building.

Trump, in a futile attempt to overturn the 2020 election in which President-elect Joe Biden won, recycled several false claims to a crowd of supporters hours before the riot as Vice President Mike Pence and Congress prepared to count Electoral College votes.

"If you don’t fight like hell, you’re not going to have a country anymore," Trump said. "Let the weak ones get out," he continued. "This is a time for strength."

Trump told the crowd he would go with them but didn't.

Pence shortly thereafter issued a statement, breaking with Trump, saying he did not have the authority to reject any electoral votes.

Here's a timeline of events Wednesday that led up to the violent protest at the Capitol and the congressional certification of Biden's win: